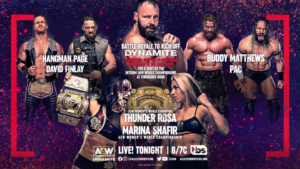 …Tony Schiavone announced there would be a new championship: the All-Atlantic Championship!

The Title represents the AEW fans watching around the world in over 130 countries. The inaugural champion will be crowned at FORBIDDEN DOOR. The first match of the tournament would take place next!

And our participants 🔽 #AEWDynamite pic.twitter.com/FilvOhhXdc

The House of Black’s Buddy Matthews (with Malakai Black, Brody King, and Julia Hart) vs. Death Triangle’s “The Bastard” PAC!

The House of Black returned to the locker room for this match.

Matthews hit PAC with a shoulder tackle. PAC returned the favor with a shoulder block of his own. They began to brawl on the floor, with PAC whipped Matthews into the time keeper’s table.

AC spiked Buddy with a DDT back into the ring! Buddy got to his feet and he and PAC traded clubbing blows. Buddy up kicked PAC. “The Bastard” fired back with two kicks and then cradled Matthews for a near fall. Buddy jumped up with a rising knee strike to PAC but PAC rallied back with a lariat.

“This is a kick ass match!” said Tony Schiavone.

Buddy hoisted up PAC and then nailed him with a Liger Bomb for a near fall! Buddy ate a back elbow from PAC and PAC impaled Matthews with a poisonrana! PAC climbed to the top turnbuckle and crashed down with a perfect Black Arrow to Buddy to pin him!

“PAC is the first man to punch his ticket to the FORBIDDEN DOOR,” said Excalibur.

The Death Triangle came out to celebrate with PAC.

The House of Black walked out and gathered Buddy Matthews, giving the evil eye to the Death Triangle. 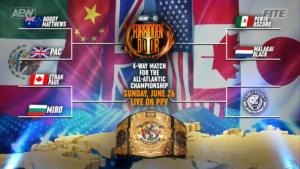 …One spot was left open for New Japan, and the other promotion behind Forbidden Door has now revealed how they’ll pick their entrant in the title bout. Their June 20 New Japan Road show will see Tomohiro Ishii take on Yoshinobu Kanemaru, and Tomoaki Honma battle Clark Connors. The winners of those two qualifying matches will wrestle on June 21, with the winner joining the All-Atlantic championship match. Both shows take place in Tokyo’s Korakuen Hall…

Here’s another look at the new title. 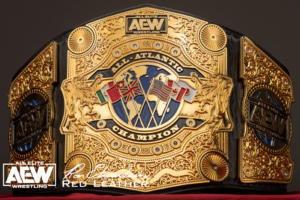 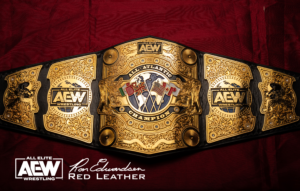 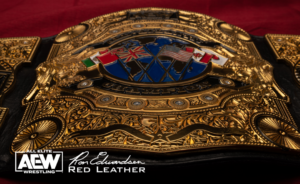