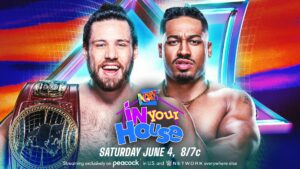 Two months ago at NXT Stand & Deliver, Carmelo Hayes could only watch in agony as a battered Cameron Grimes dragged himself rung by rung to the top of the ladder and retrieved the NXT North American Title in an incredible 5-Way Ladder Match.

Painful though the loss may have been for the self-proclaimed “A Champion,” Hayes has remained laser-focused on his mission to regain the title and become just the second multiple-time NXT North American Champion in WWE history.

Of course, it doesn’t hurt to get an assist or two from the outspoken Trick Williams, whose trash talking is matched only by his knack for picking the perfect time to interfere, as he did when he tied Grimes’ hand to the ropes to help Hayes get back on the attack.

Grimes turned the tables when he leveled his challenger and Williams by going head over heels above the top rope to flatten them at ringside, but Hayes secured the win and reclaimed the championship by sidestepping the hard-charging Grimes and annihilating him with a top-rope leg drop. 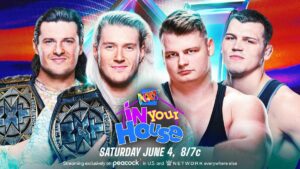 During a tense backstage meeting on the In Your House Kickoff Show, self-proclaimed leader of Diamond Mine Roderick Strong apologized to Ivy Nile for recently losing his cool, though he reiterated that he was very serious about one thing: The Creed Brothers would be out of Diamond Mine if they failed to defeat Pretty Deadly for the NXT Tag Team Championship.

The Creed Brothers took issue with Strong’s proclamations but still vowed to become champions in front of their parents, who were in the front row, though they faced a tall task: attempting to prevent the eccentric Elton Prince and Kit Wilson from getting under their skin.

Despite a match that saw an astronomical amount of trash talk from Pretty Deadly – not to mention Prince and Wilson dropping Julius back-first on the steel ringside steps with a double spinebuster – Brutus received a much-needed tag and began steamrolling everything in sight with menacing strikes and spine-bending suplexes.

Minutes later, Brutus planted Wilson back-first into the canvas, and Julius broke out the shooting star press and blasted his foe with one final strike to garner the 1-2-3 and win the NXT Tag Team Titles.

After the match, the brothers went to ringside to embrace their parents, who were smiling from ear to ear.

A interesting night, but all is not lost for Cameron Grimes.

.@CGrimesWWE is getting right back on that rocket and shooting for the moon! 🚀#WWENXT @bronbreakkerwwe pic.twitter.com/HGcGmGpxar

On this week’s NXT it looks like he’s next to challenge Bron Breakker for the NXT World Heavyweight Championship.