The original match for the AEW Tag Team Championships was billed as three way bout. 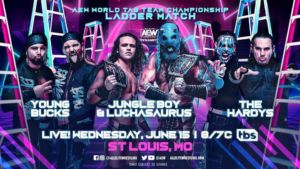 However, on Monday June 13, 2022, Jeff Hardy was arrested for his third DUI (Driving Under the Influence)  in Florida. 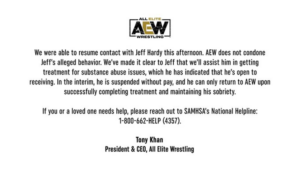 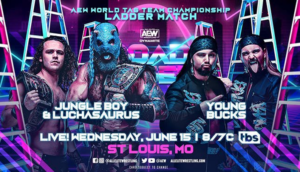 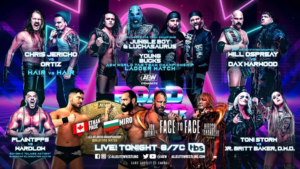 Luchasaurus kicked a ladder out of the hands of the Bucks! Nick set up another ladder in the corner. Jungle Boy scaled the ladder and jumped onto the Bucks. Matt Jackson used a Northern lights suplex on Jungle Boy, smashing him into the ladder!

The Bucks used anti-air superkicks on Jungle Boy. Luchasaurus choke slammed Nick Jackson onto a ladder! Luchasaurus used a moonsault off the apron onto the Bucks!

“Climbing the ladder is the only way to win it,” said Jim Ross.

Luchasaurus climbed the ladder with Matt Jackson on his back. Jungle Boy rammed a ladder into Matt’s back. The Bucks powerbombed Luchasaurus off the ladder onto a ladder that was propped on the ropes!

“Look at this crash!” said Excalibur.

The Bucks nailed Jungle Boy with the BTE Trigger! The Bucks climbed the ladder and grabbed the belts! 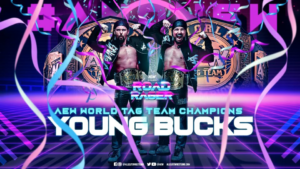 With Christian Cage’s turn it doesn’t appear that Jungle Boy and Luchasaurus will be going back after the AEW Tag Team championships soon as they (or just Jungle Boy) has Cage to deal with.