Here’s is the day-of final card of the 20th Anniversary PPV. 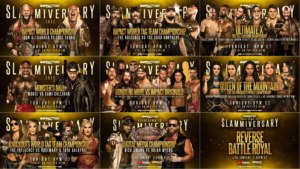 Myers hits a back suplex on the apron to gain the early advantage. Myers wears down Swann with a chin lock. Swann catches him in mid-air with a rolling clothesline to begin building momentum. Swann hits a series of kicks for two. Myers comes back with a spear for a near fall of his own. Myers spikes him with a DDT but it’s not enough to keep Swann down. Swann connects with the 450 Splash to retain the Digital Media Championship and reclaim physical possession of his title!

Ace Austin’s X-Division Title is up for grabs in the high-risk, high-wire spectacle known as Ultimate X! Miguel soars over the top rope, colliding with King on the outside. Austin hits a Fosbury Flop over the top rope to the floor. Everett hits a snap German suplex to Miguel on the apron. Everett takes out everyone with a springboard corkscrew. Bailey hits a modified Ultimo Weapon from the cables. There’s a huge Tower of Doom out of the corner as Miguel is the only one left standing. Miguel spikes Zayne with a super Canadian Destroyer from the top. Bailey and Austin scale the cables and exchange strikes near the title. Everett joins them but Bailey sends him crashing to the mat with a head scissors take-down. Bailey fights off Austin and unhooks the title to become the new X-Division Champion! 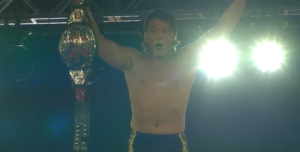 Rosemary and Taya Valkyrie reunite to challenge The Influence for the Knockouts World Tag Team Titles! Valkyrie hits a sliding German suplex on Dashwood. Rosemary goes for a spear on Dashwood but Rayne makes the save and drives her into the apron. Rayne and Dashwood trap Rosemary as they cut off the ring and prevent her from making the tag. Rosemary finally creates separation and makes the tag to Valkyrie who hits a thunderous Blue Thunder Bomb on Rayne. Dashwood cuts off Rosemary mid-spear with a running dropkick. Rosemary and Valkyrie hit double spears on The Influence for a pair of two counts. The Influence connect with The Collab on Rosemary but can’t make the follow-up pin attempt. Rosemary is back from the dead as plants Rayne on the mat to win! 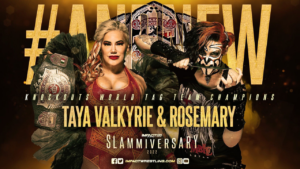 Two of the greatest tag teams in all of professional wrestling settle the score with the IMPACT World Tag Team Titles on the line! The action is fast and furious as a wild brawl breaks out around ringside. Gallows distracts the referee, allowing Anderson to drive Jay head-first into a steel chair. Jay superkicks Gallows, then makes the tag to Mark. Moments later, The Good Brothers attempt Magic Killer on Mark but Jay breaks it up. Mark and Anderson exchange strikes in the middle of the ring with Anderson gaining the upper-hand following an uppercut. The Briscoes connect with a double team powerbomb on Anderson. Anderson fights off a Doomsday Device. Gallows then tosses Mark off the top rope into a Gun Stun from Anderson. The Good Brothers hit the Magic Killer on Jay to win the match and become the new IMPACT World Tag Team Champions! 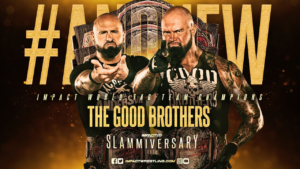 Mickie James is the Special Guest Enforcer for the first-ever Queen of the Mountain match where, after becoming eligible via pinfall or submission, you win the match by climbing a ladder and hanging the Knockouts World Title high above the ring! Whoever is pinned or submitted during the duration of the match must enter the penalty box for two minutes. Green hits a top rope crossbody into everyone on the floor, then pins Steelz to become eligible. Steelz refuses to enter the penalty box but James tosses both her and Evans inside as the two-minute countdown begins. Steels is released from the box as she hits Yim with a springboard bulldog. Evans tries to get involved but James tosses her from ringside. Yim connects with a bridged German suplex on Green, then pins her to become eligible. Yim climbs the ladder with the Knockouts World Title in hand but Steelz takes her out with a cutter. Purrazzo locks in the Fujiwara Armbar on Steelz, forcing her to submit in order to become eligible. Yim soars off the top of the penalty box, dropkicking Green into a steel ladder. Yim hits Grace with a Package Piledrier on the floor to score a pinfall and send her to the penalty box. Green attempts to hang the title but James pulls her off the ladder as payback for attacking her earlier. Green and Purrazzo are perched on the ladder but Yim tips it over, sending them both crashing through two tables on the floor. Steelz and Grace score a double pinfall on Yim, making them both eligible. Grace pins Steelz following a Grace Driver to send her to the penalty box. Grace hangs the Knockouts World Title to win the match and become the new Knockouts World Champion! 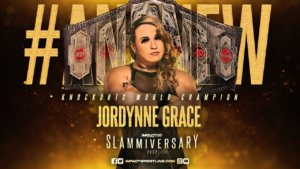 It’s main event time at Slammiversary as Josh Alexander defends the IMPACT World Title against IMPACT original Eric Young! Both competitors avoid each other’s Moonsaults as we reach a stalemate in the early going. Deaner sets up a table at ringside. Meanwhile, Young drives his elbow into the chest of Alexander form the top rope. Alexander hits a powerbomb, then floats over into a submission. Alexander brings the fight to the other members of Violent By Design, then connects with a top rope crossbody for two. Young counters the C4 Spike into the Stroke, a la Jeff Jarrett. The trip down memory lane continues as he hits a Black Hole Slam for two. Alexander connects with the Best Moonsault Ever for another near fall. Alexander almost puts Young away with the Styles Clash but when Young kicks out, Alexander floats over into the Ankle Lock. Young is tapping out but the referee is blinded after Deaner throws powder in his eyes. Alexander sends Doering through a table with an Olympic Slam. Young shatters a guitar over Alexander’s head. Young spikes him with a Piledriver on the exposed wood but somehow Alexander kicks out at two. Alexander connects with a C4 Spike to score the pinfall and retain the IMPACT World Title! 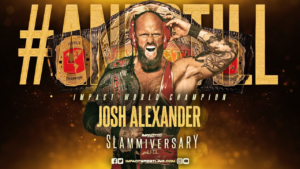