In addition to 4 of 6 championship matches seeing new champs crowned (full spoilers here) there was another big match on the card. 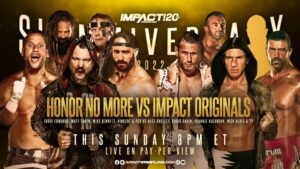 The IMPACT Originals vow to defend the legacy of IMPACT Wrestling against the threat of Honor No More! The bell rings and the fight is on. Vincent hits Shelley with a Saito suplex, followed by a Flatliner for two. Vincent continues the assault with a side Russian leg sweep to Sabin. Taven hits Just the Tip on Shelley but Kazarian breaks the pin. PCO crashes and burns as Shelley avoids the De-Animator on the apron. Shelley fights out of the corner with a double Sliced Bread to Edwards and Vincent, allowing him to create some much-needed separation. Shelley makes the tag to Kazarian who hits Vincent with a slingshot cutter. It’s total nonstop action as both teams exchange offense at a blistering pace. Sabin dives through the ropes, colliding with Bennett on the outside. Taven is next to fly as he soars over the top into everyone on the floor. 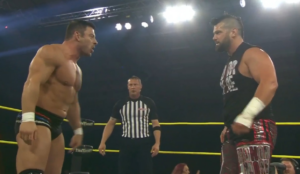 Back in the ring, Richards and Edwards square off. Richards locks in a double leglock on both Edwards and Taven. Vincent hits Red Rum on Aldis but Sabin makes the save just in time. Traci Brooks jumps the guardrail and neutralizes Maria at ringside. Kenny King gets involved but D’Lo Brown hits the ring and takes him out with a Sky High. Sabin connects with the Cradle Shock on PCO as Earl Hebner makes the three count, awarding the victory to the IMPACT Originals!

You may remember Davey Richards is one-time tag team partner with his opponent Eddie Edwards as the American Wolves. 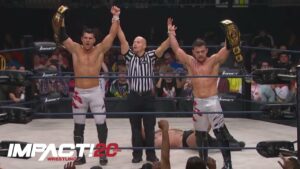