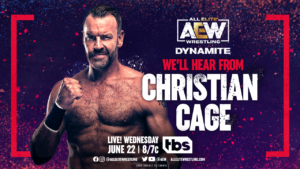 Following their AEW World Tag Team Title Ladder Match loss to The Young Bucks last week, it seemed as if Christian Cage would be there to console Jungle Boy just as he had been following JB’s previous losses in The Owen Hart and that FTW Title bout with Ricky Starks.

Instead, following a hug from his perceived mentor, Jungle Boy would find himself driven skull first into the canvas via Christian Cage’s signature Killswitch maneuver [full AEW Double or Nothing 2022 spoilers here].With Luchasaurus in no condition to assist his partner after falling off a ladder and crashing through two tables, Christian would then deliver another of his signatures, the One Man Conchairto, when he ruthlessly smashing a steel chair across his fallen protege’s head.

Christian Cage would exchange some harsh words with Jungle Boy’s family sitting at ringside before he left the ring, and leaving fans worldwide questioning just why Christian turned his back on the men he’d spent so much time mentoring, and not just mentoring, but also fighting by their side as with Full Gear 2021.

This Wednesday night on Dynamite we will hear from Christian Cage regarding his actions last week, but is there anything he can say that could possibly justify those actions?

RETURN OF THE DRAGON? 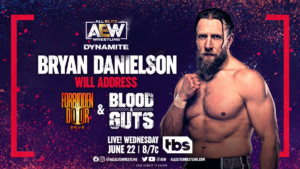 “The American Dragon” Bryan Danielson has been absent from AEW ever since Double or Nothing 2022 and the chaos that was Anarchy in the Arena. In his absence, the challenge was made for The Jericho Appreciation Society to fight Eddie Kingston, and anyone who would join him, inside the Blood & Guts cage in Detroit on June 28th (INSERT DETROIT LINK). On top of that, with the Forbidden Door PPV coming together, Danielson had a challenge thrown at him by Suzuki-Gun’s Zack Sabre Jr to face off in a match that fans have been salivating to see for quite some time.

On Wednesday night, Danielson makes his return to AEW, and we expect to hear from The Blackpool Combat Club member in regards to both of these events. Will we see Danielson compete in Chicago this Sunday night? Will he step into Blood & Guts next week at the Little Caesar’s Arena? Tune into Dynamite on TBS to find out what “The American Dragon” has to say about his immediate future… 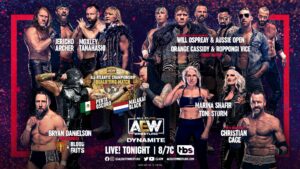