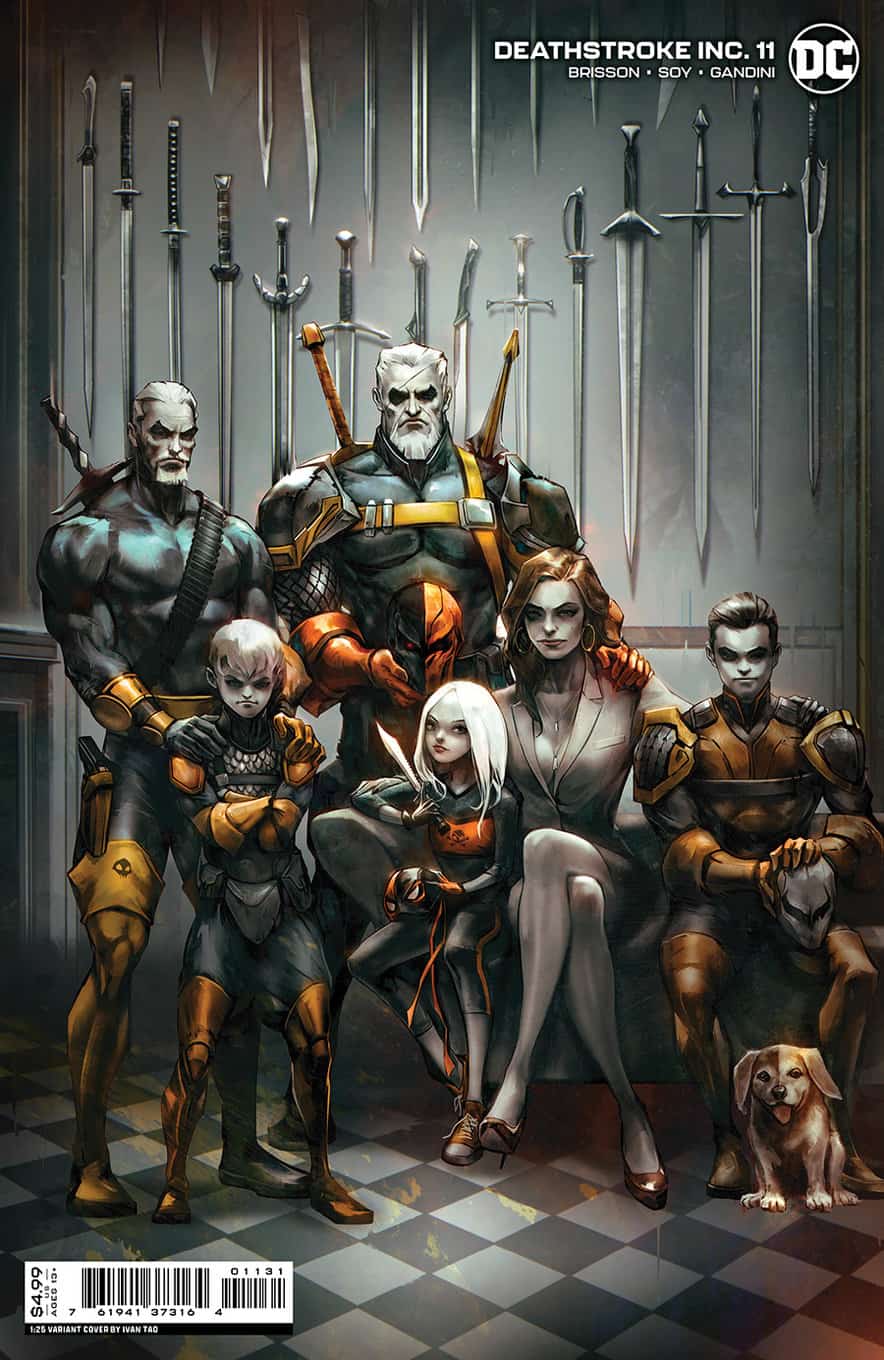 “Deathstroke: Year One” continues! To escape the banality of family life, Slade Wilson, the failed soldier and test subject, undertakes his first assassination mission. His target is the last surviving doctor from the experiment that gave him his powers! Slade doesn’t need his heightened senses to tell him something is wrong with all of this…but will his intuition stay his hand when the time comes for the final death stroke? 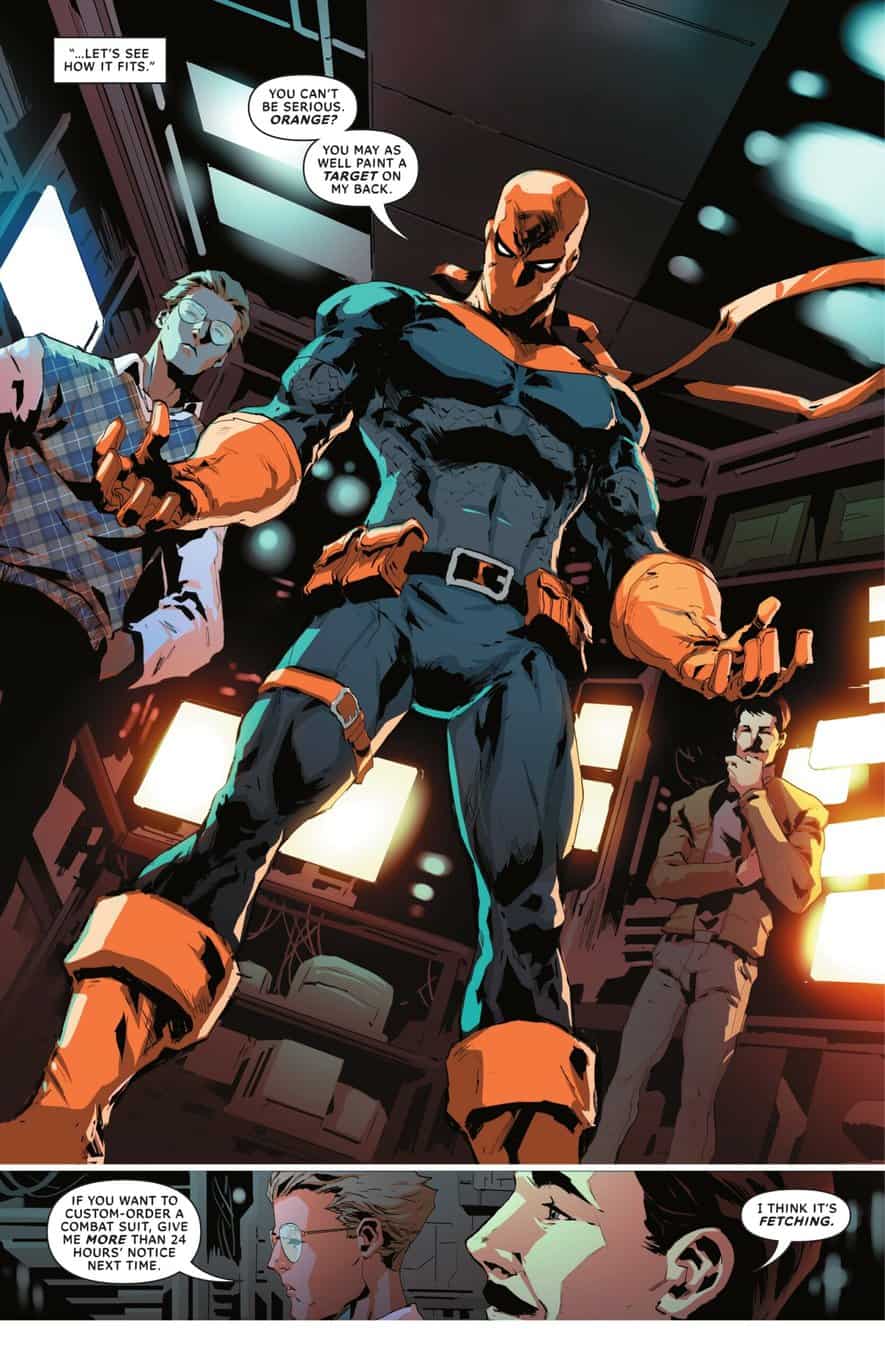 We learn in this chapter of Deatstroke: Year One why his iconic costume was orange in it despite Slade Wilson’s protestations; he didn’t give his armorer / tailor enough lead time. Although Batman had a more practical reason, as he explained elsewhere some time ago, as to why he had yellow on his chest to accentuate the bat symbol; that was to deliberately draw fire to the part of his costume with the most protection. 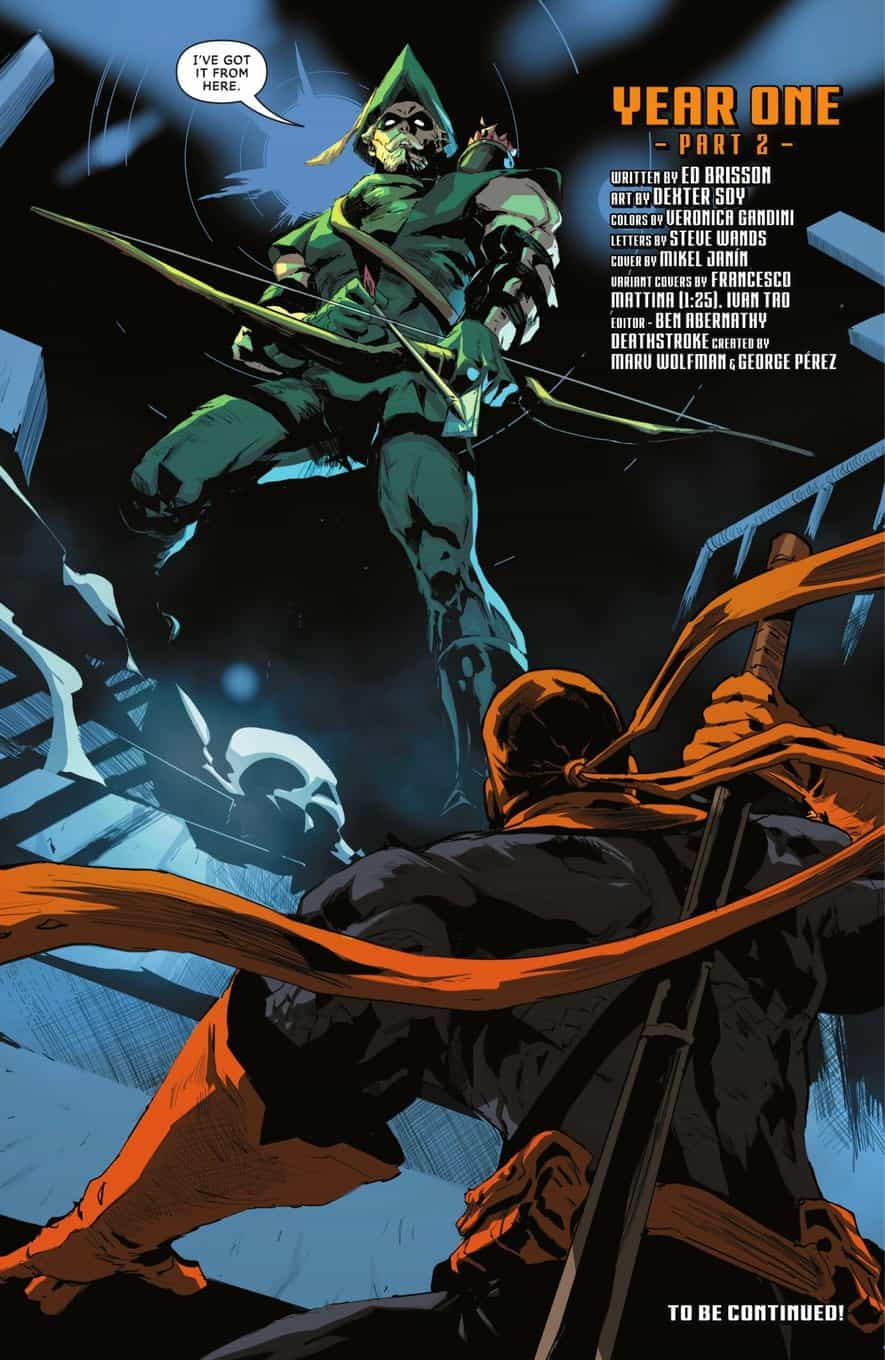 The book ends with DC’s other most mustachioed character, Green Arrow, confronting Deathstroke… 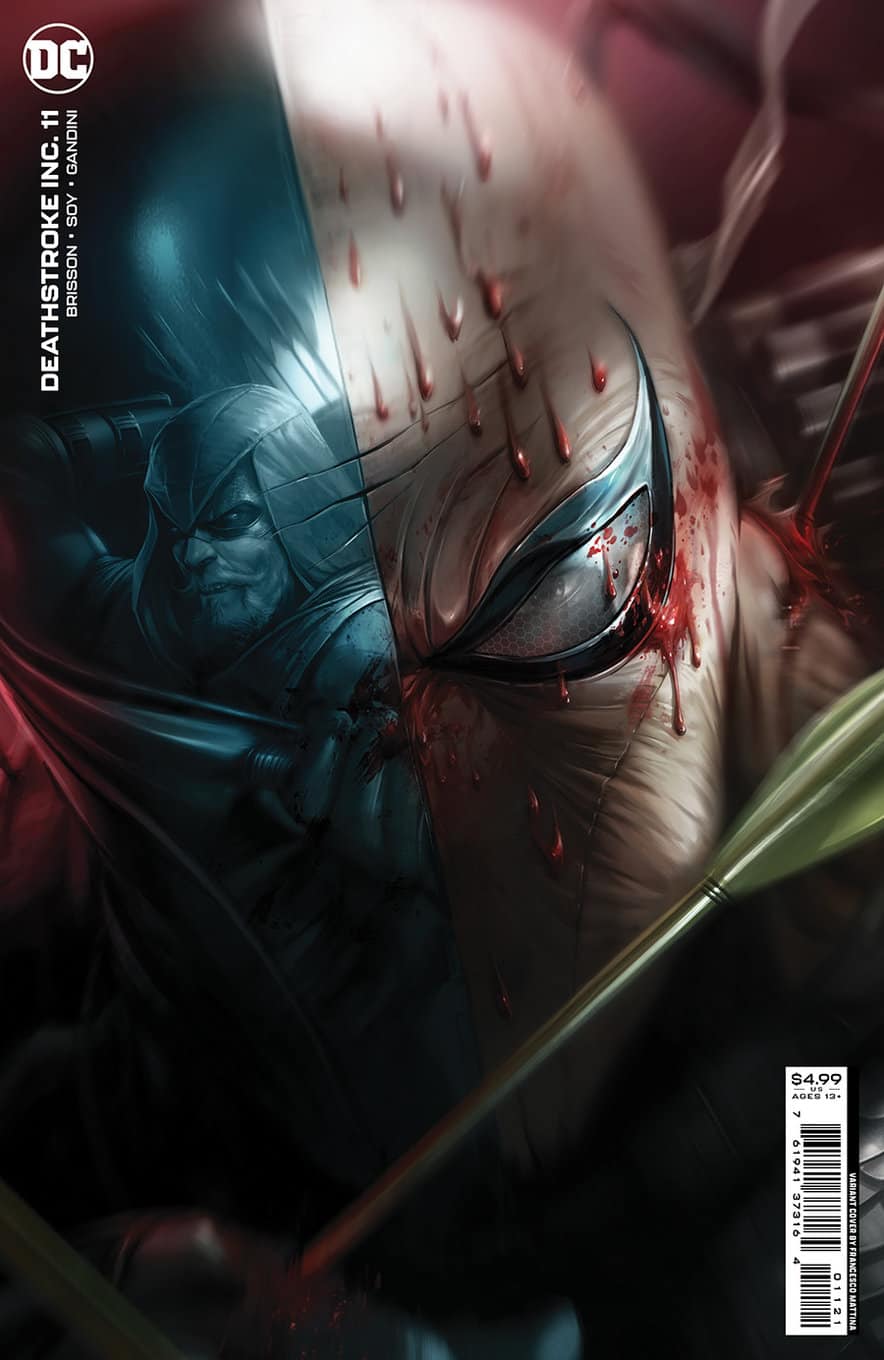 …a cliffhanger spoiled by one of the book’s variant covers. 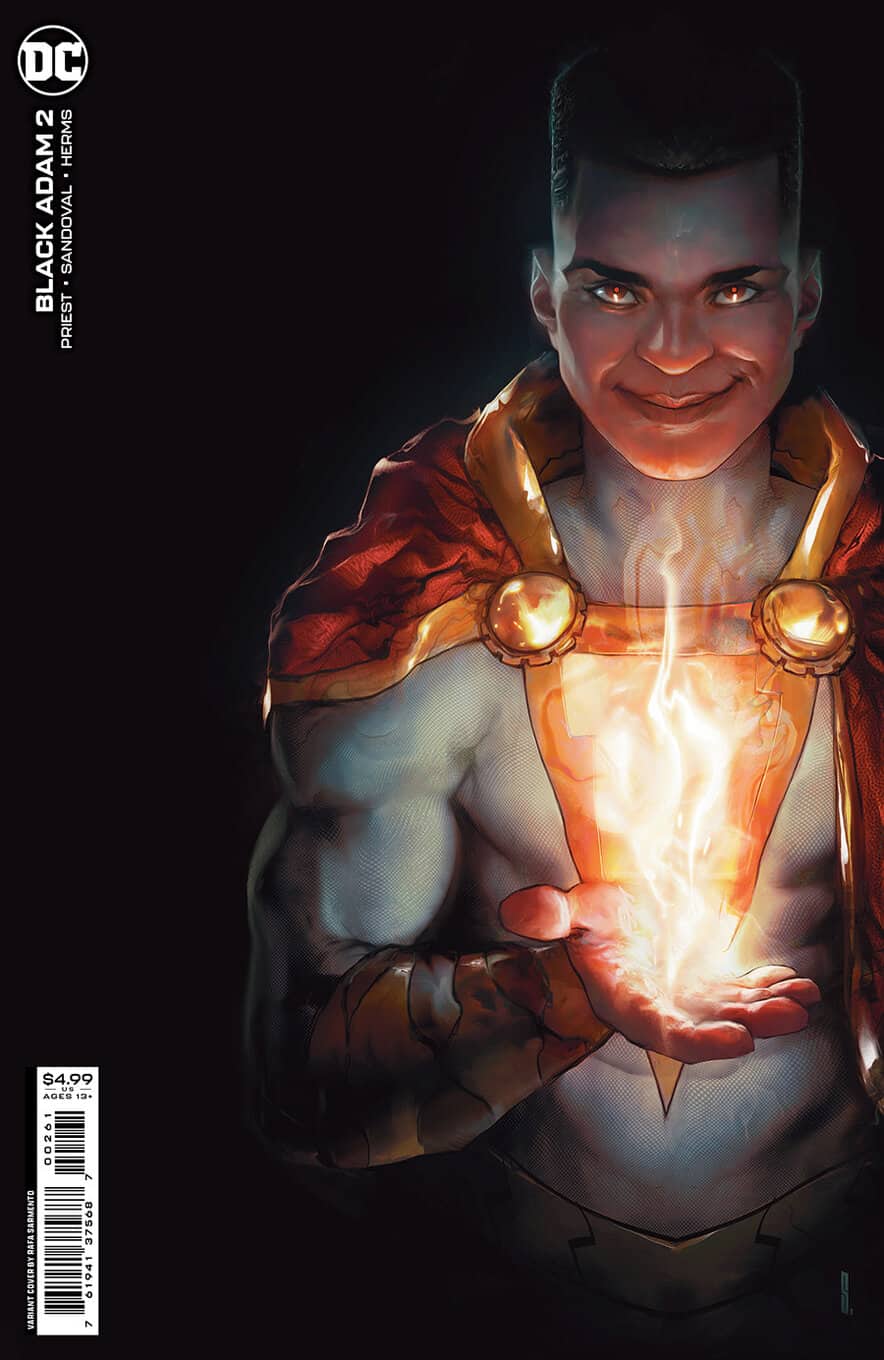 “I am not a hero, I’m a god.” Who is Black Adam? His power and his very life draining from him, Theo Teth-Adam is confronted by a specter from his past haunting him with the treachery he employed to gain his powers and forcing him to confront an inescapable truth: there is no redemption for Black Adam. 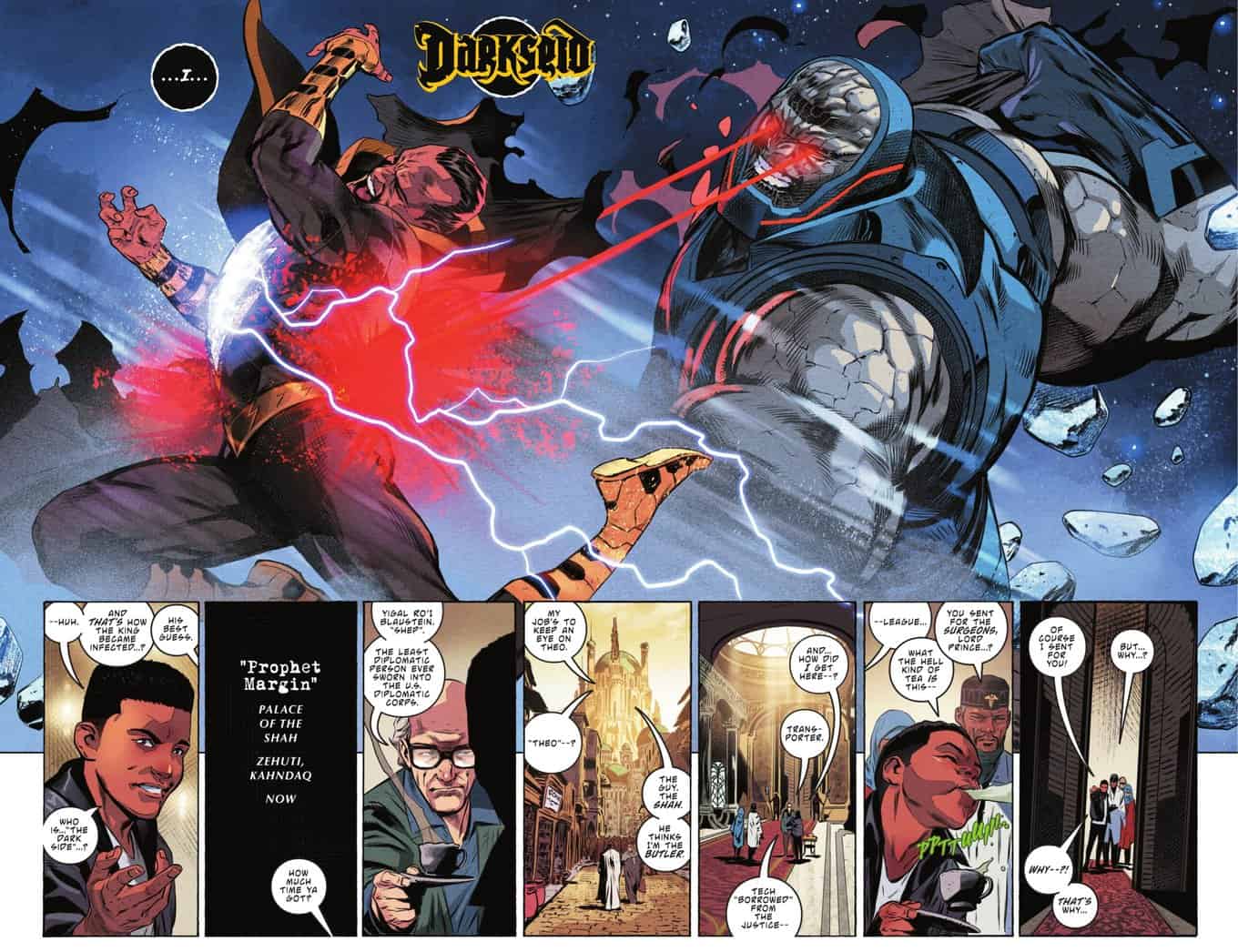 We get more direct evidence as why Black Adam is seemingly fatally hurt. 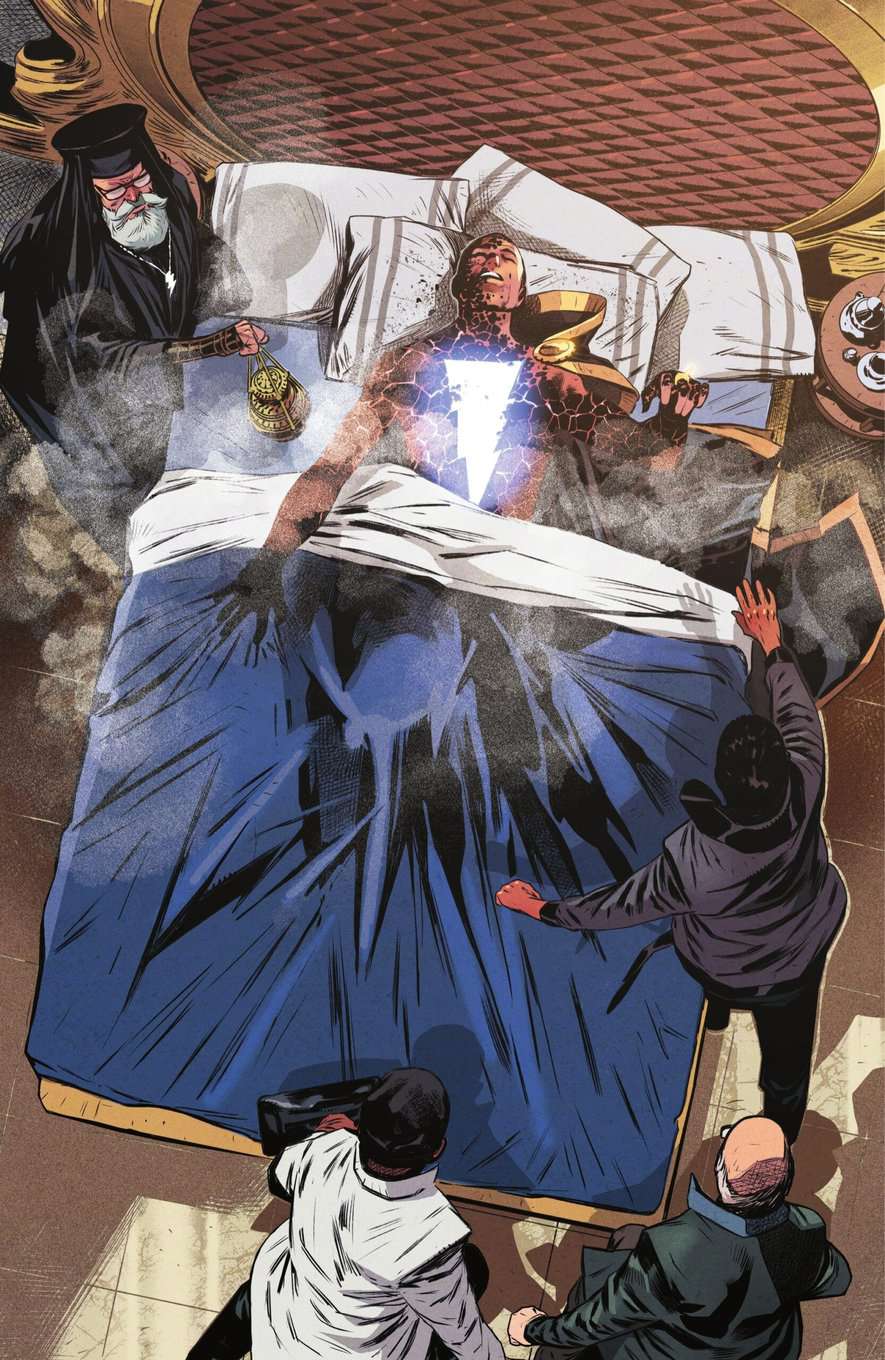 It was due to his Dark Crisis related battle with Darkseid. 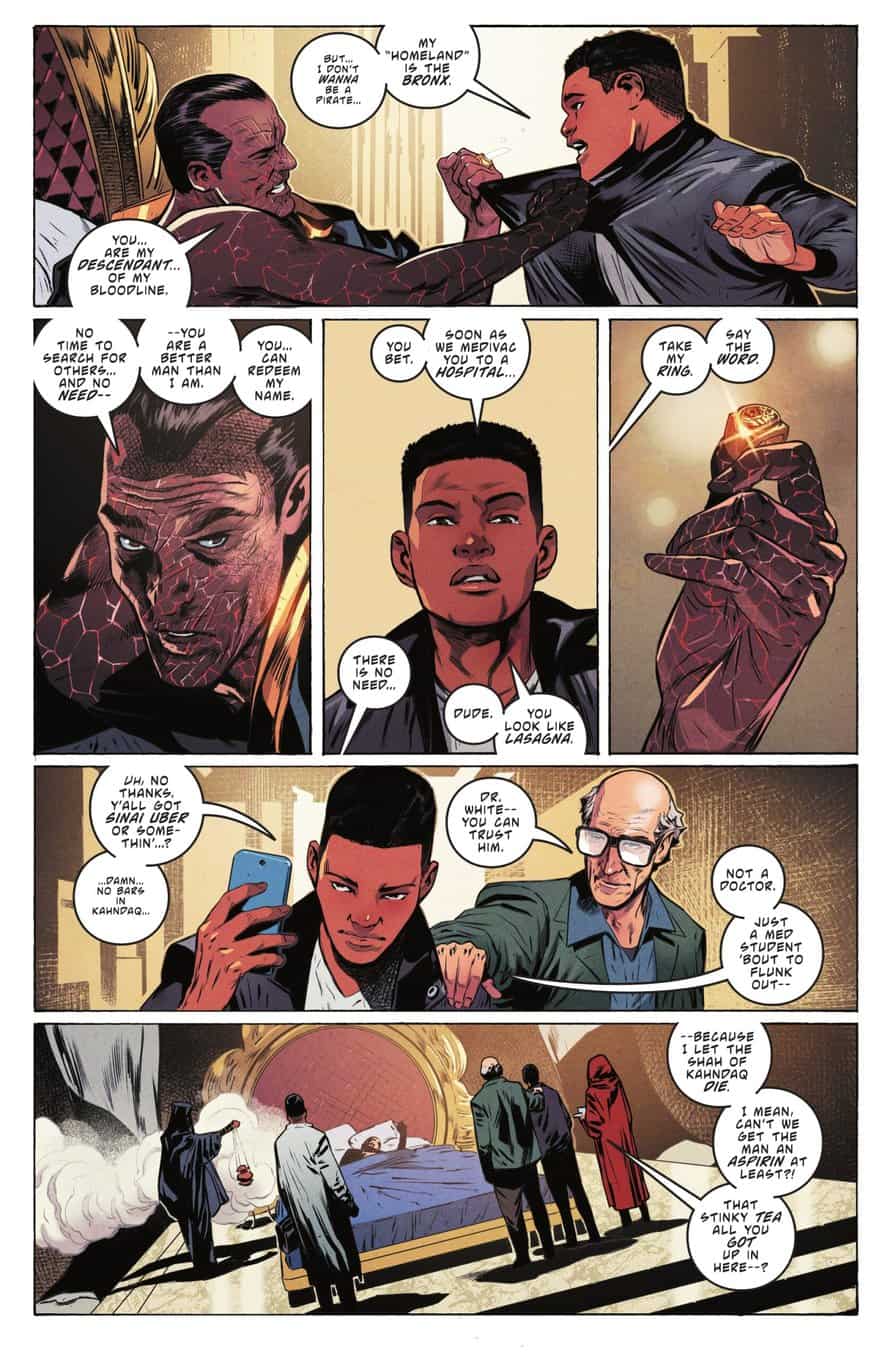 He needs Malik White, presumably Malik Adam, a descendent of his from the Bronx, NY, to carry on the Shazam tradition. 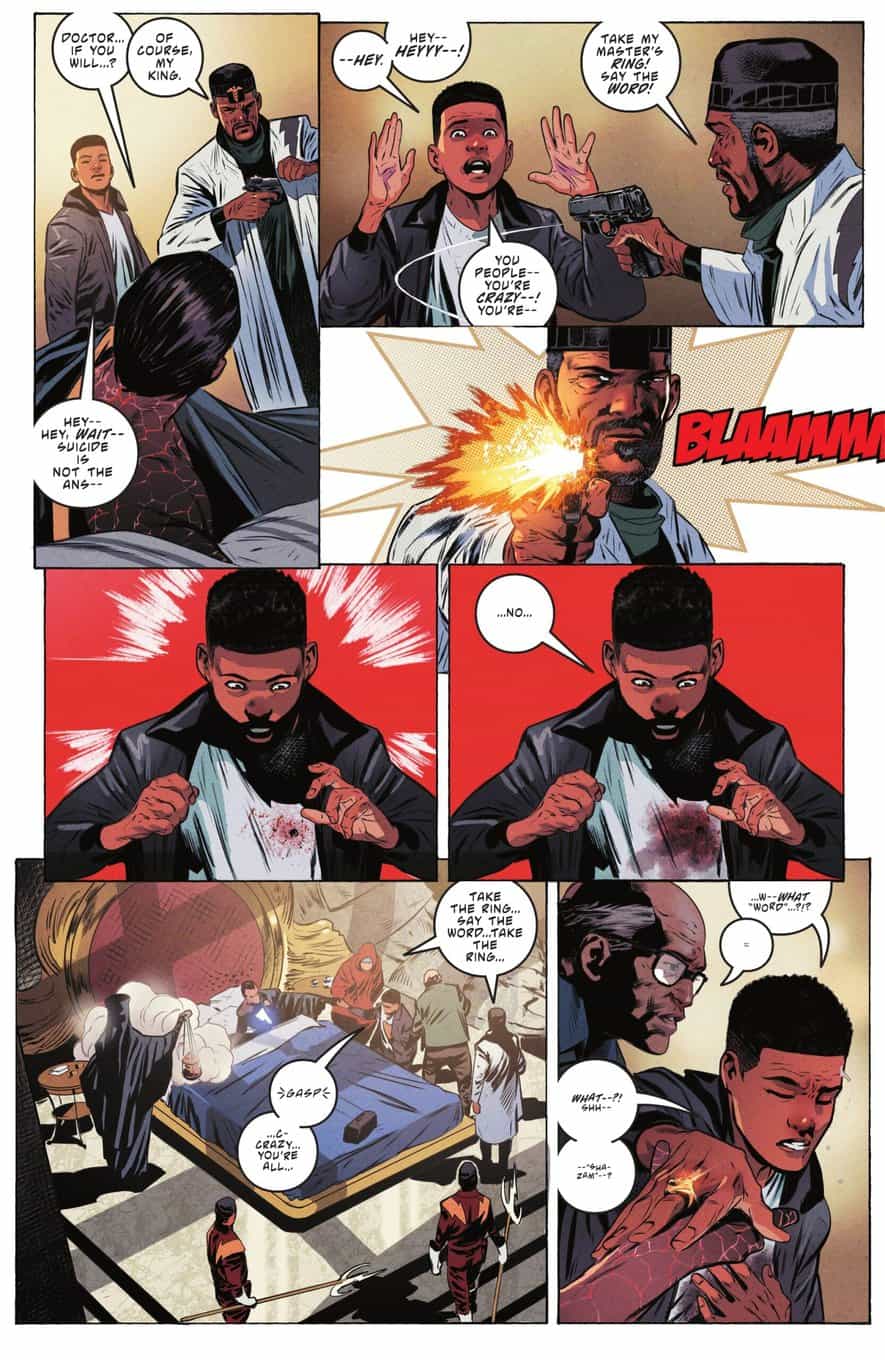 Malik just wants to continue his studies to become a doctor, but Black Adam and his loyalists force his hand. 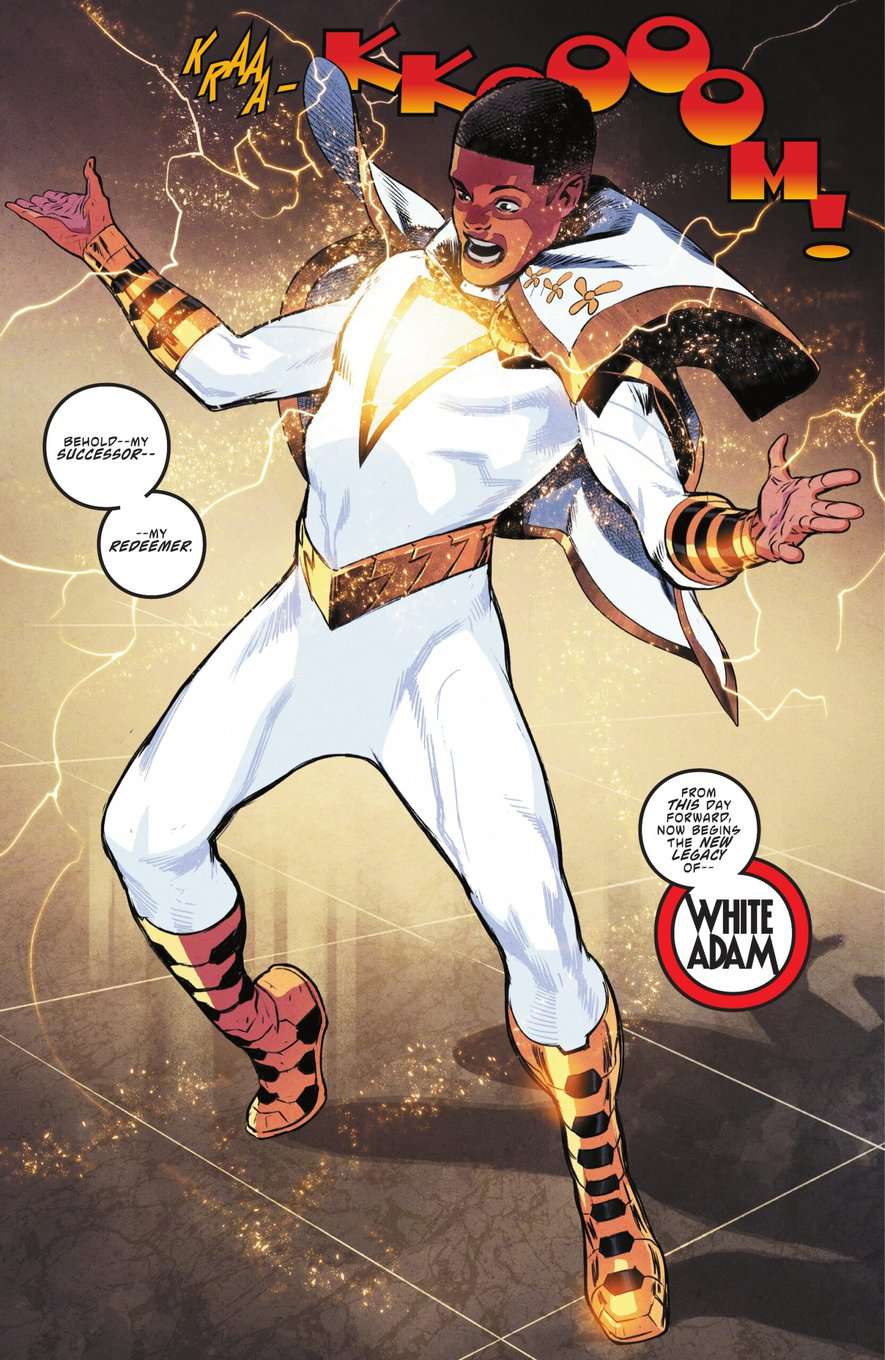 They shot him so to heal he needs to say that magic word of Shazam and is dubbed White Adam. 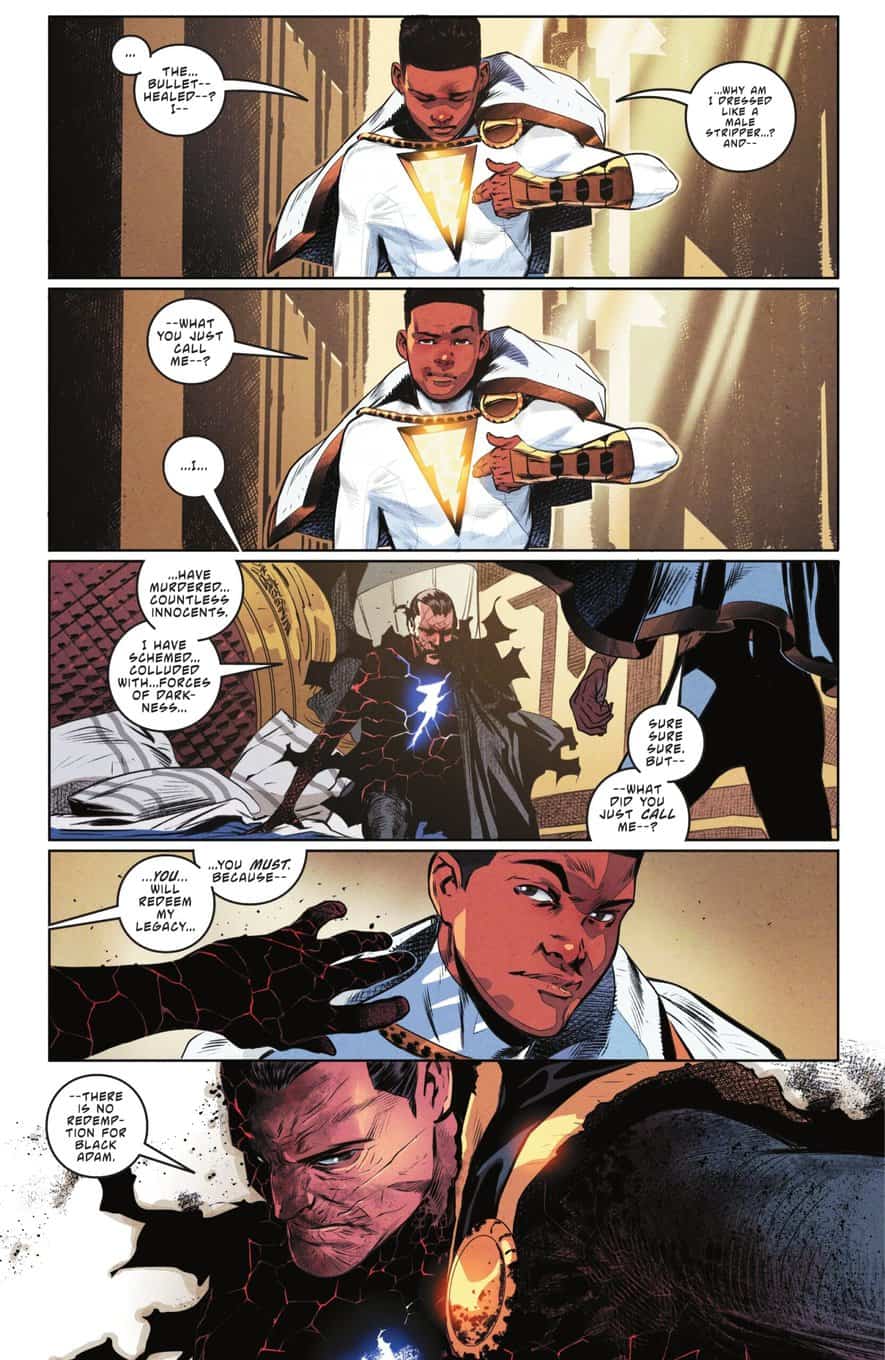 That may be the Great Darkness, the villain seemingly behind Dark Crisis on Infinite Earths, who has infected Black Adam, but nonetheless Teth Adam needs help. 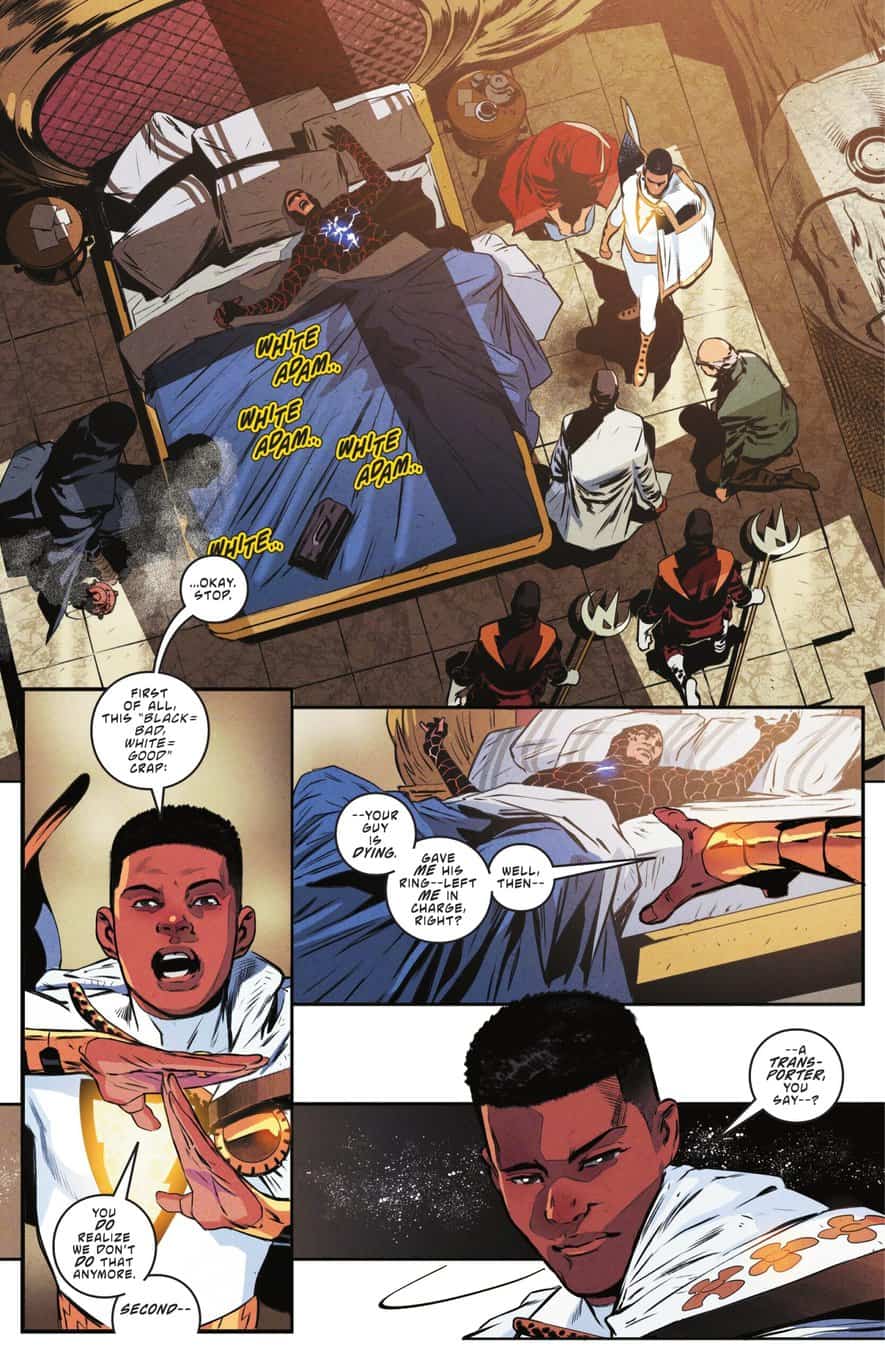 So, Malik has him transported to the hospital that had presumably been interning. 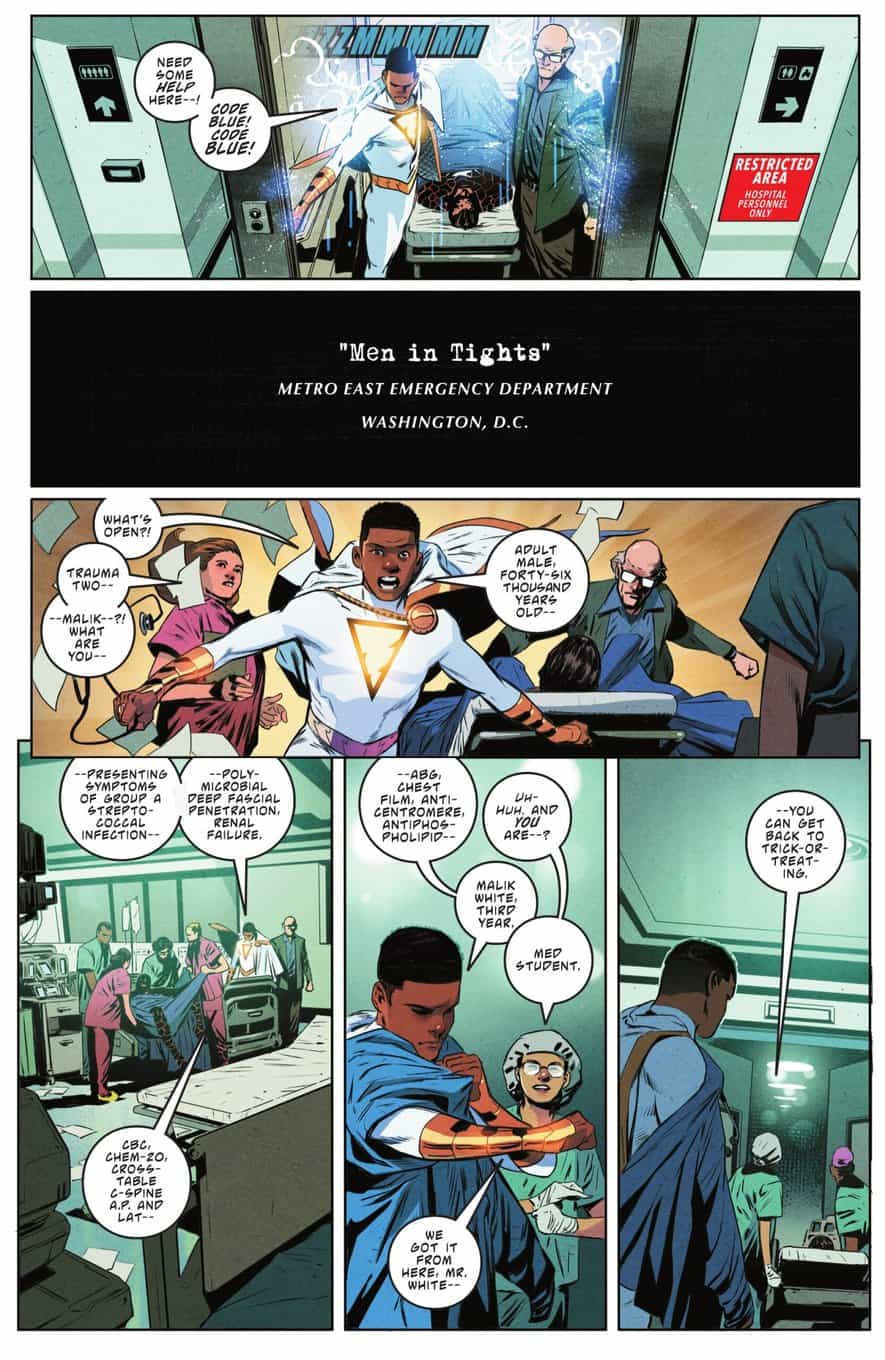 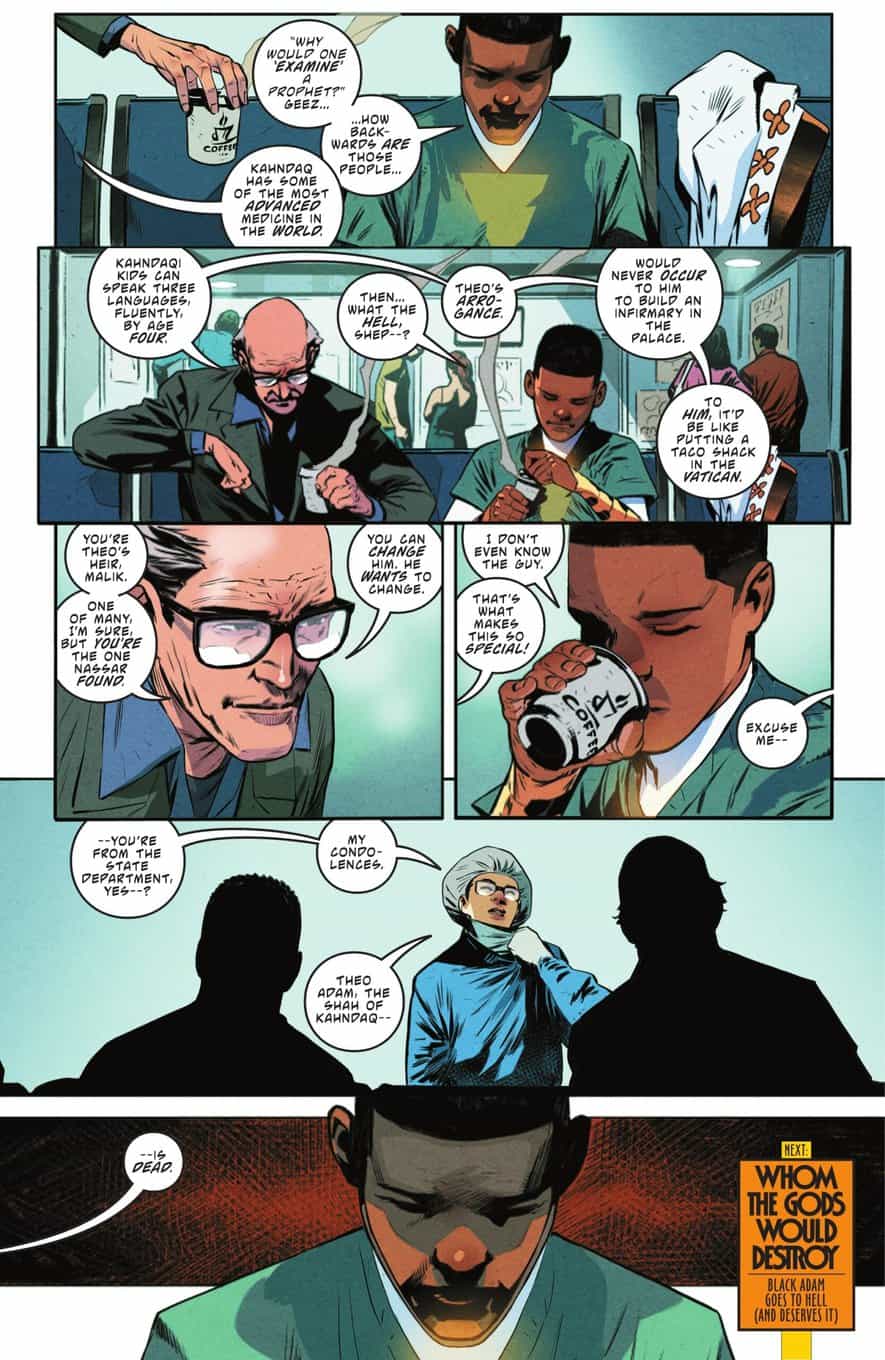 However, it is not enough as Black Adam is pronounced dead at the end of the issue and teased to be going to hell in Black Adam #3. 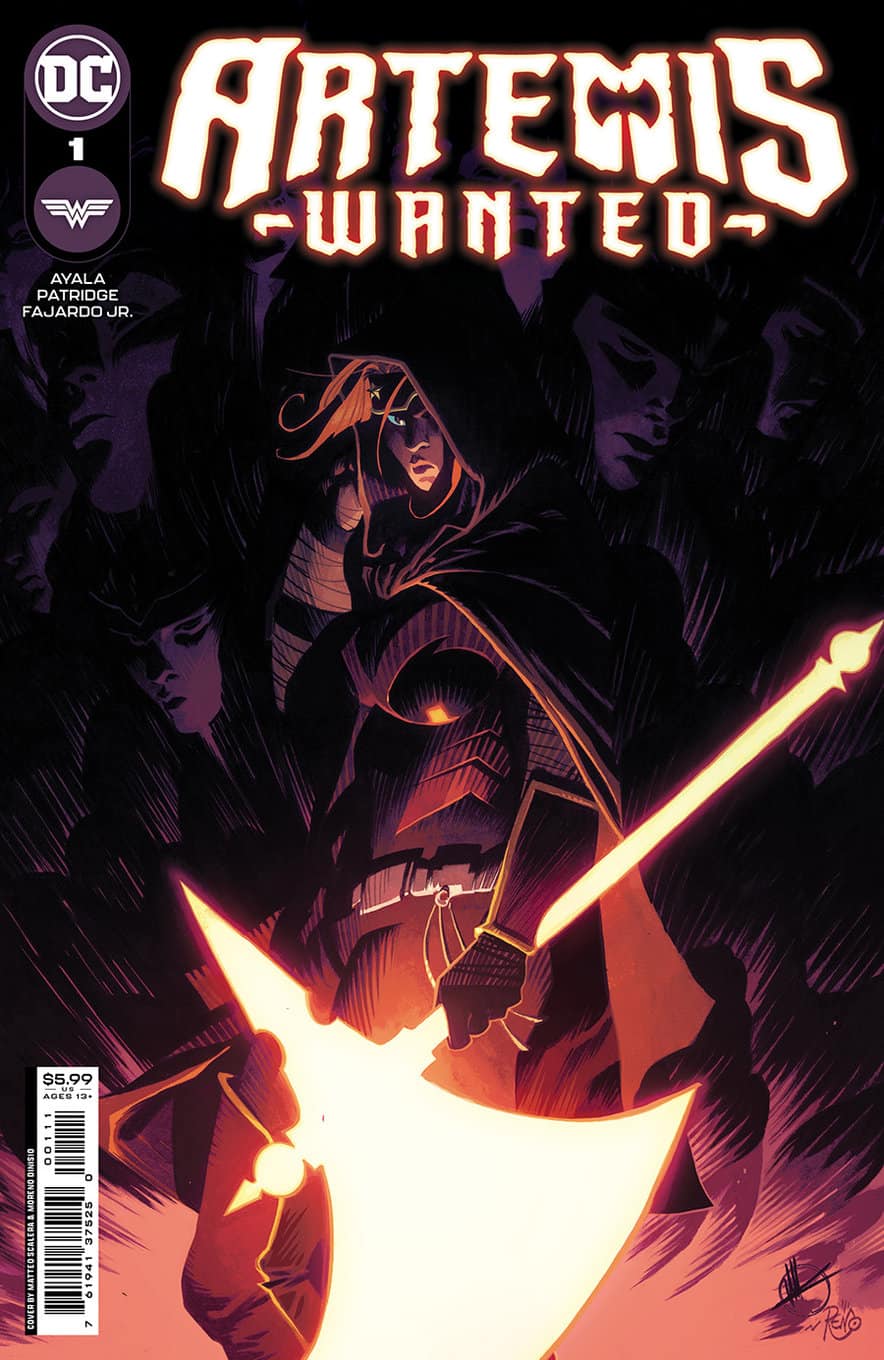 After the events of Trial of the Amazons, Artemis is on the run from her sisters for her sins. She may say it was all in the name of peace, but not even Wonder Woman believes a word she says. Now the former member of the Bana-Mighdall is wanted by not only her people, but all Amazon tribes!

Is there a future for a warrior who has destroyed her past? Find out as Artemis travels the world searching for answers and a new path forward. She’ll need all the help she can get, and it may come from the unlikeliest of sources…the Gods! 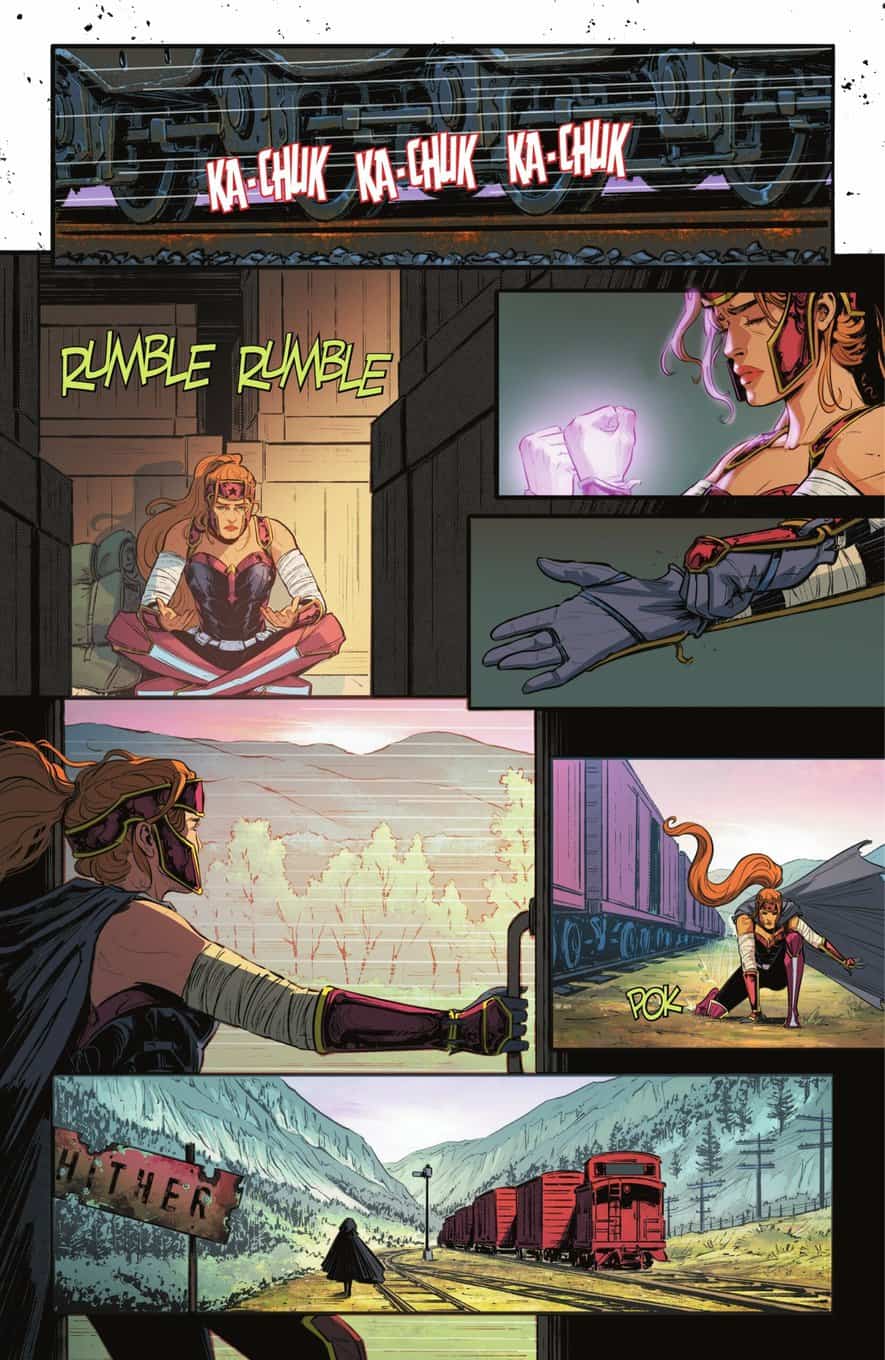 Artemis is traveling the world and ends up in a place called Hither. 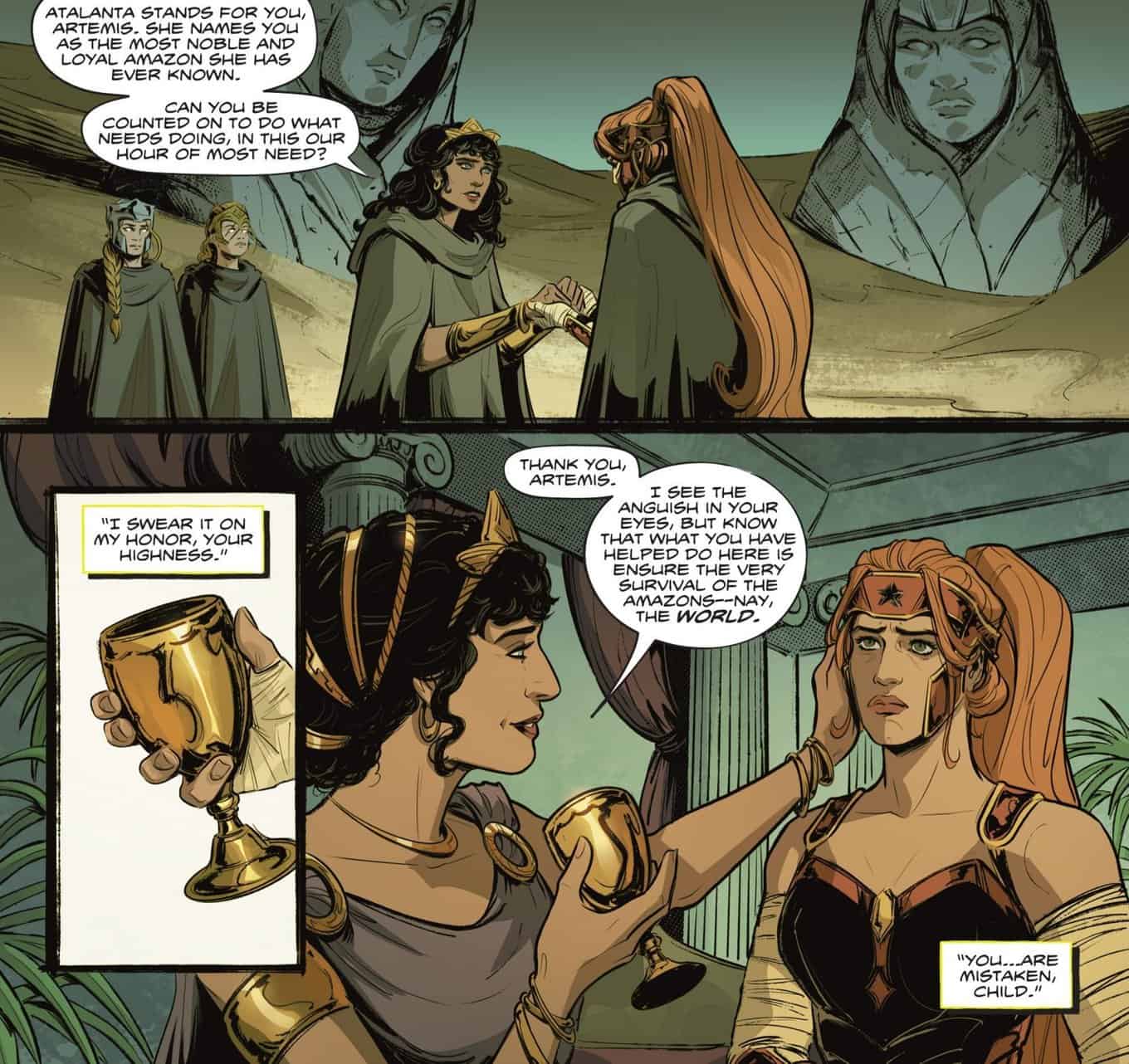 She thinks back to her relationship to the former Queen of the Amazons, and Wonder Woman Diana’s mother Hippolyta, before…

…Artemis poisoned and killed her. 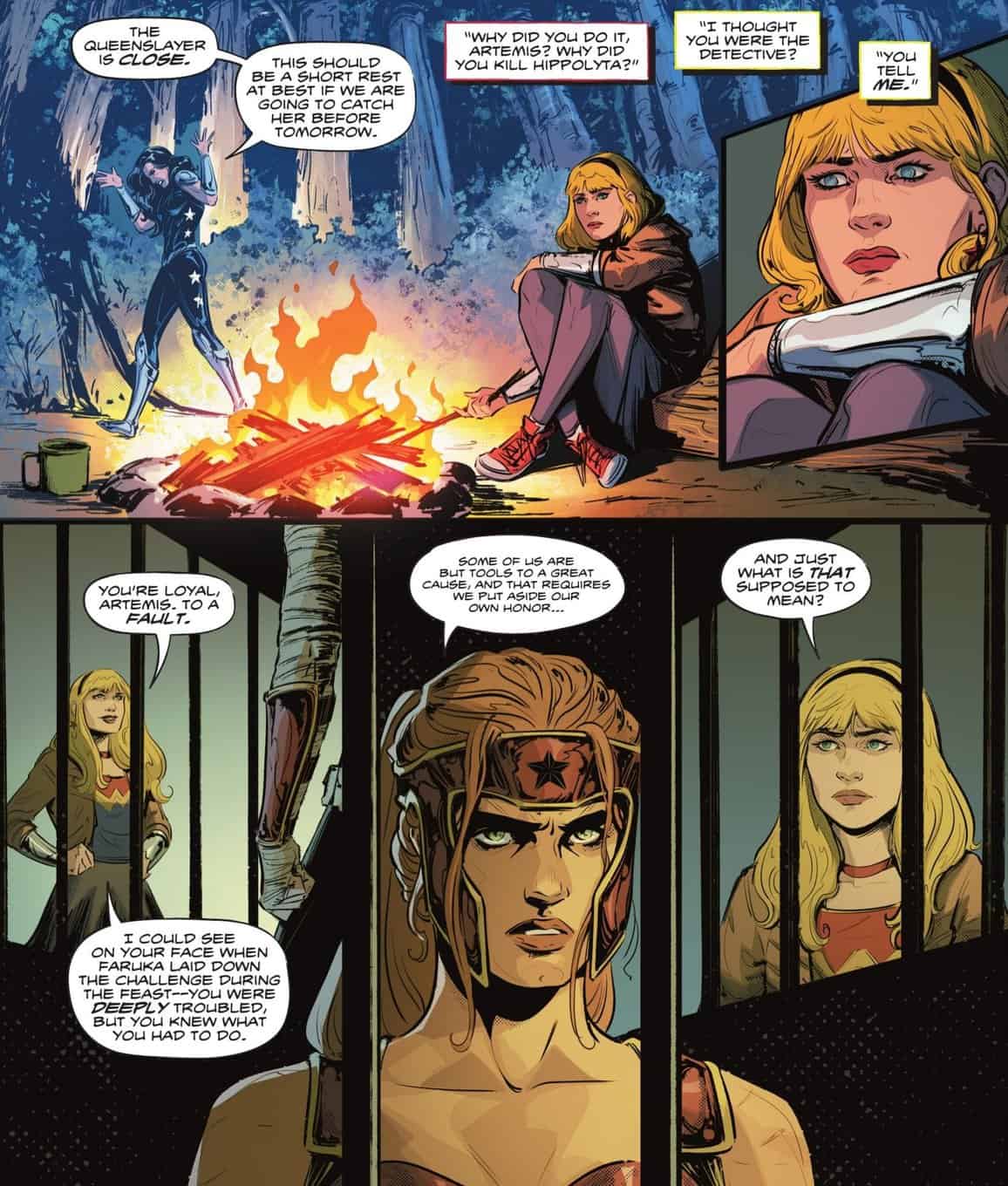 Wonder Women and Wonder Girls in their own right, Donna Troy and Cassandra Sandsmark, are on Artemis trail who’s been dubbed the Queenslayer. 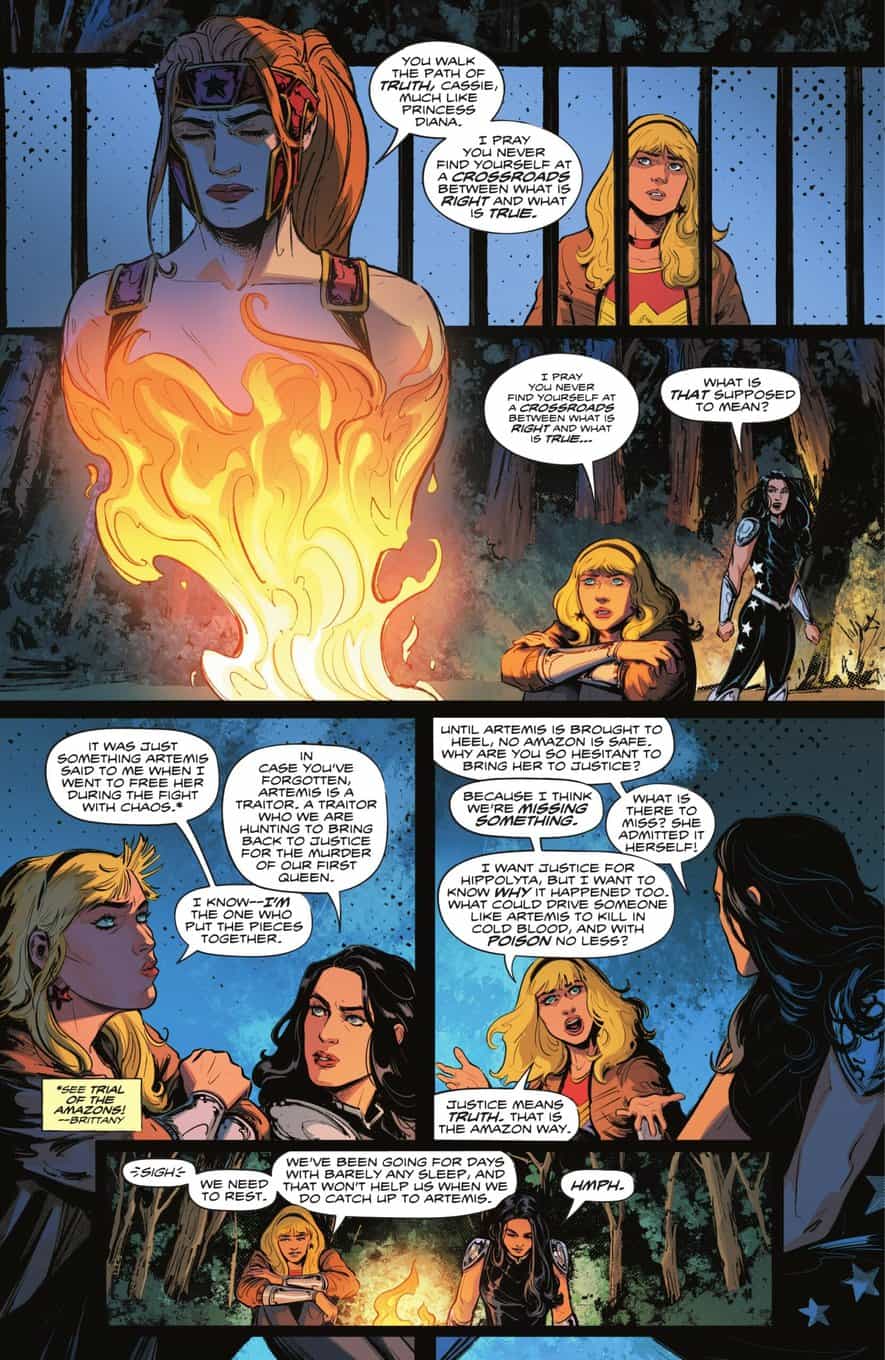 Cassandra recalls some cryptic answers Artemis gave them about why she killed Artemis; perhaps there is more to this than they all first thought? 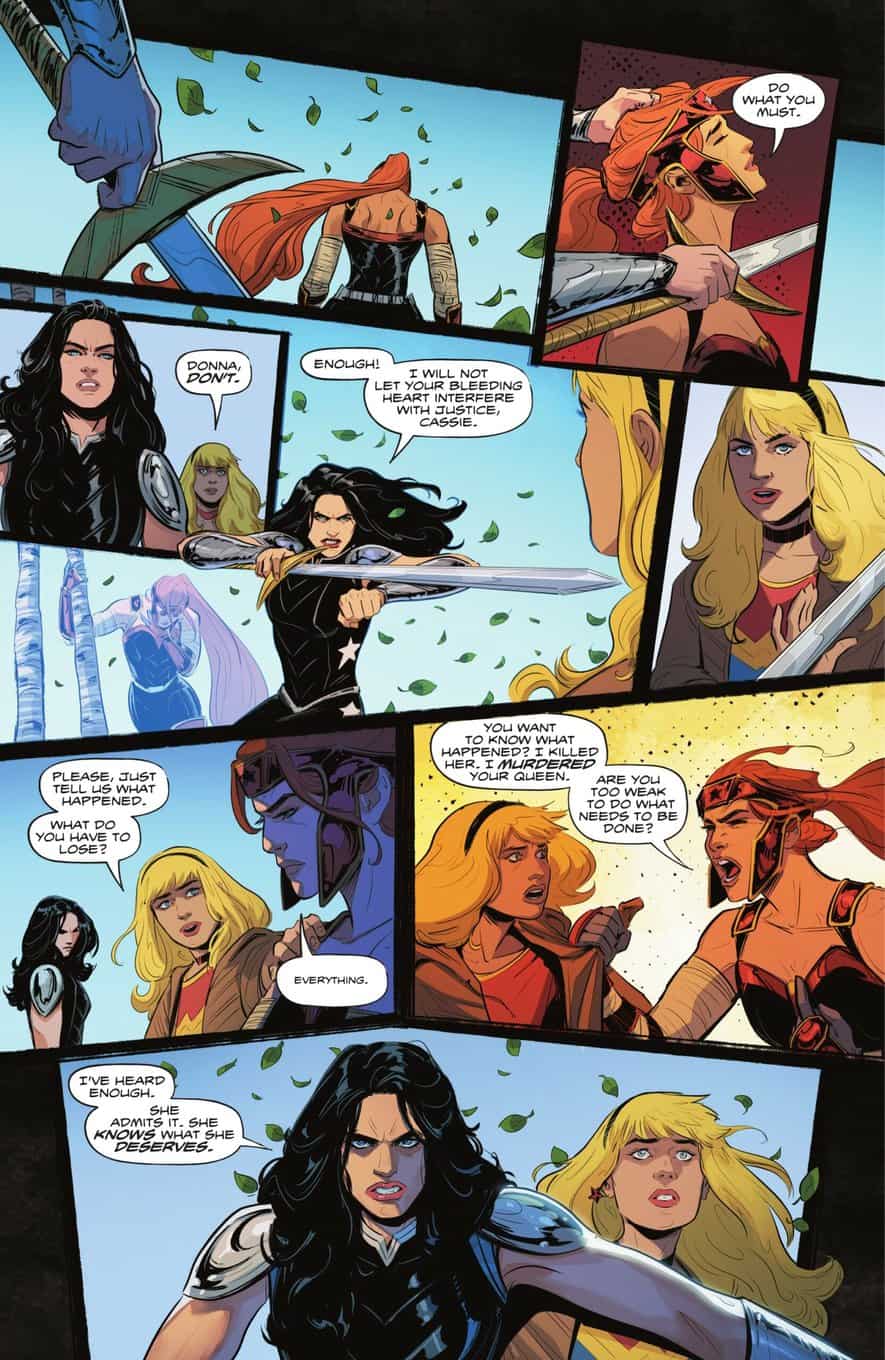 The Wonder Women catch-up the Artemis and Donna Troy wants to kill her for her crime, but… 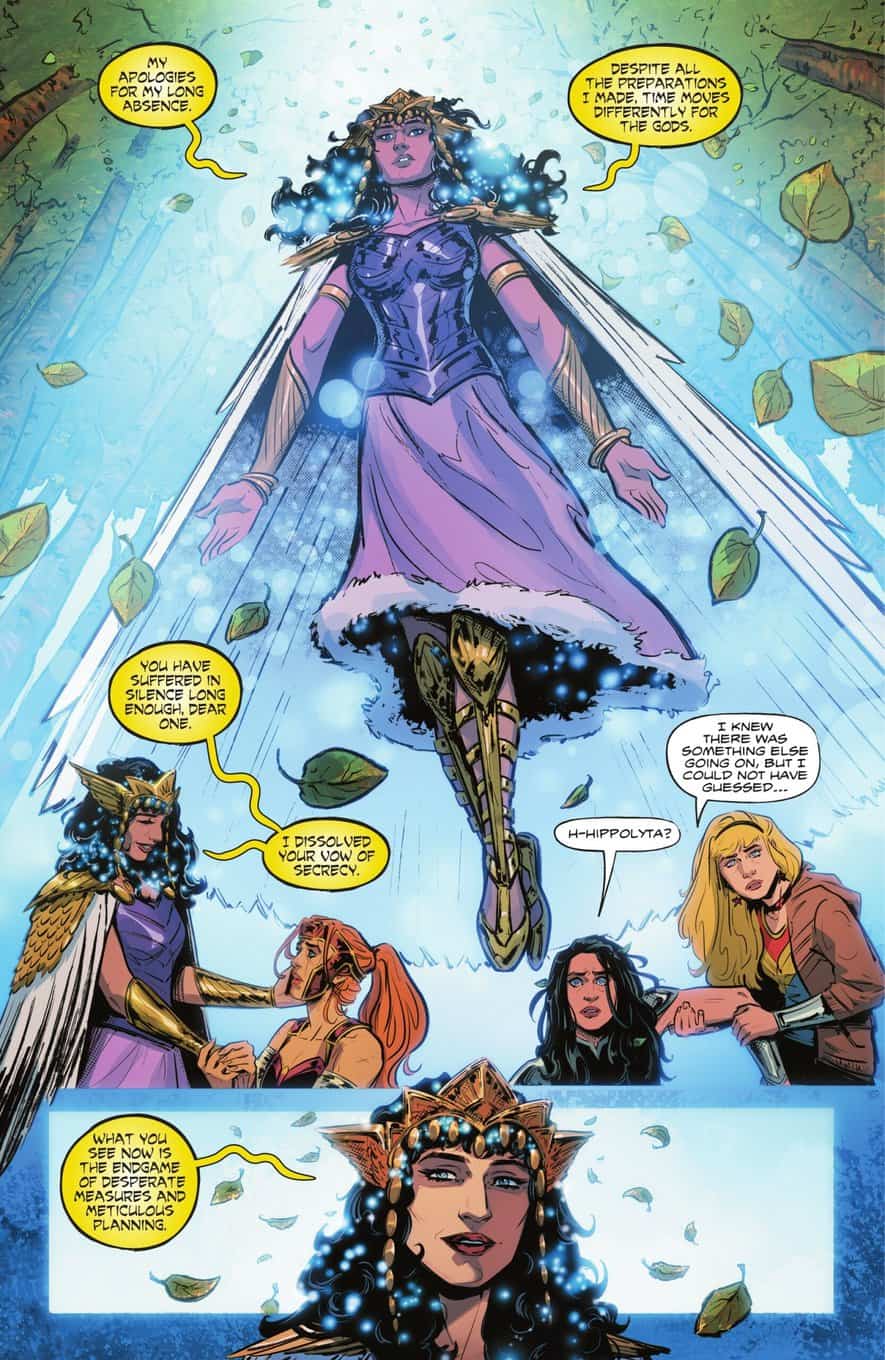 …they’re all greeted by the goddess Hippolyta?! 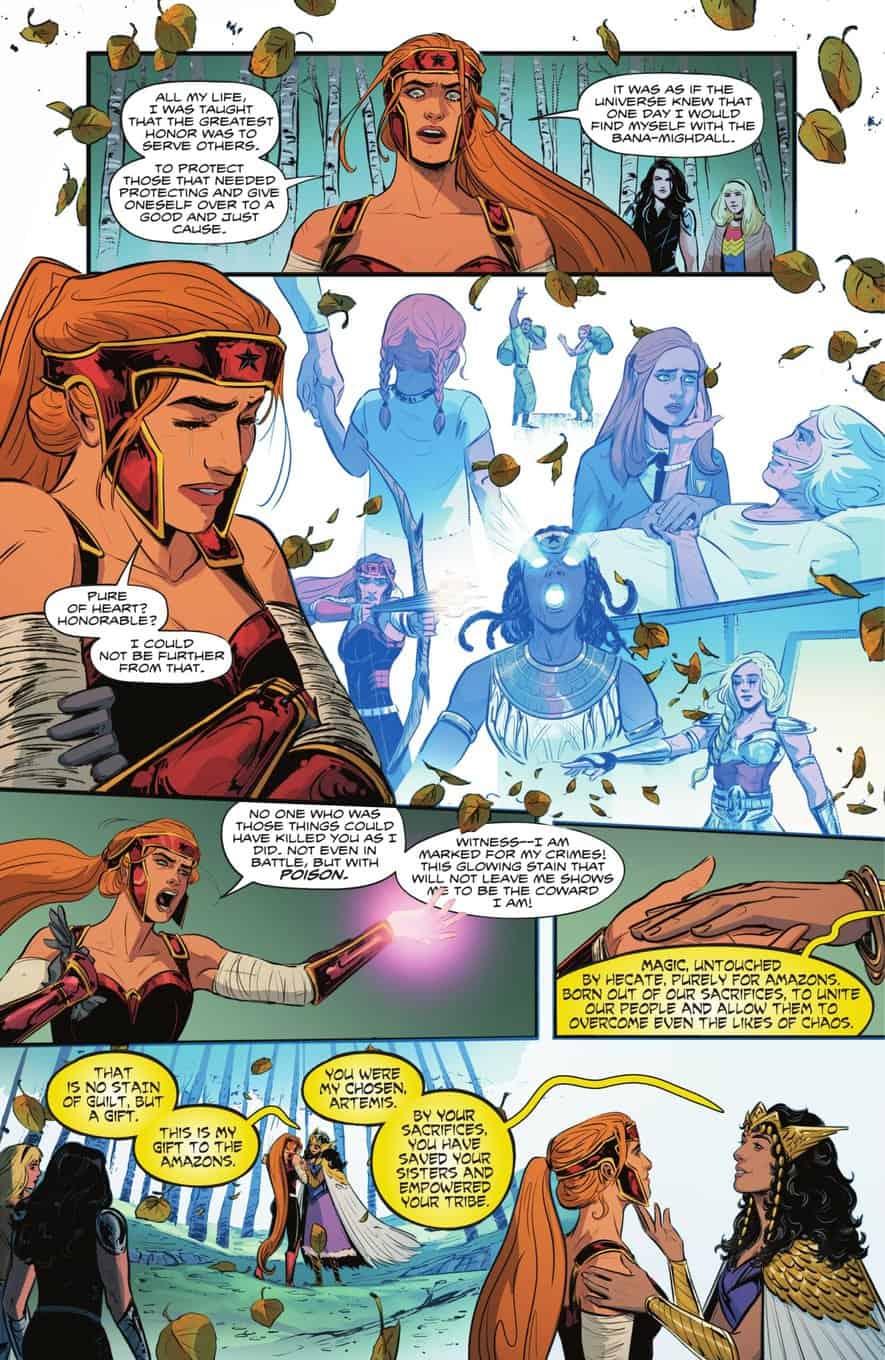 Turns out Artemis was doing the will of the gods. 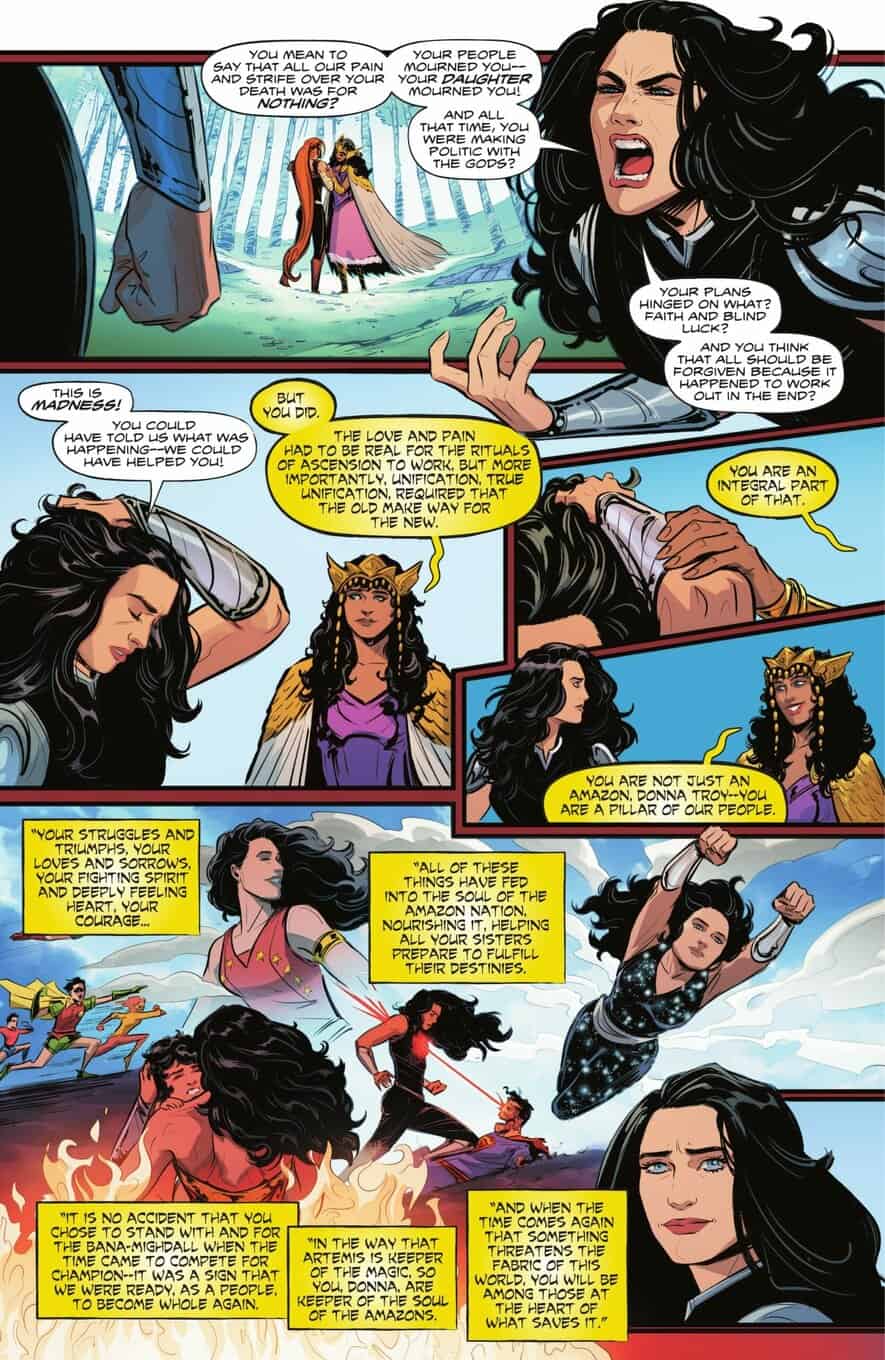 There is now a role for all three of them going forward together – Artemis, Donna and Cassie – which proves intriguing. 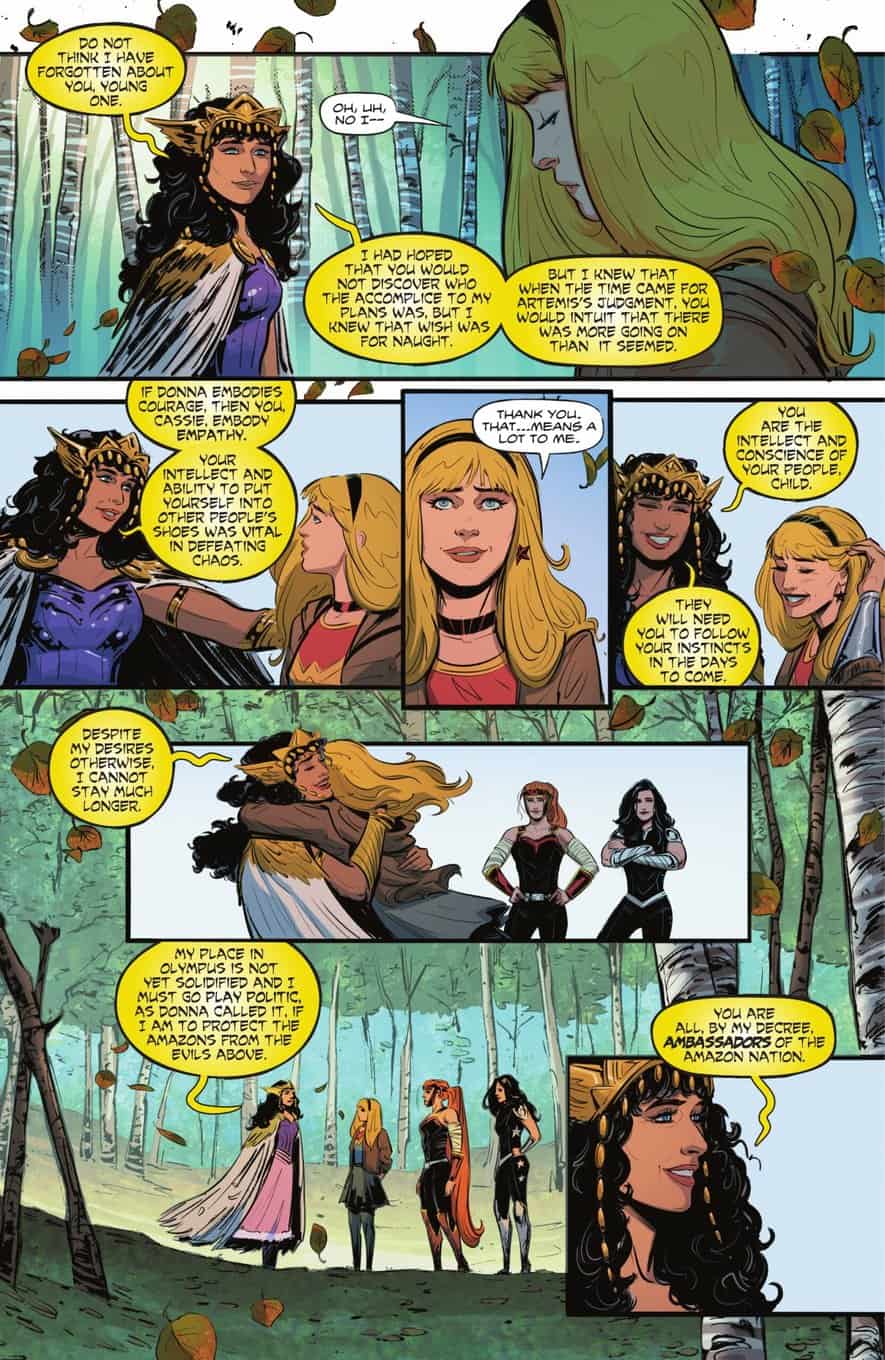 They need to look after each other as well as Amazons wherever they reside if they need help.

The Wonder Women nonetheless turn over Artemis to the new Queen of the Amazons. 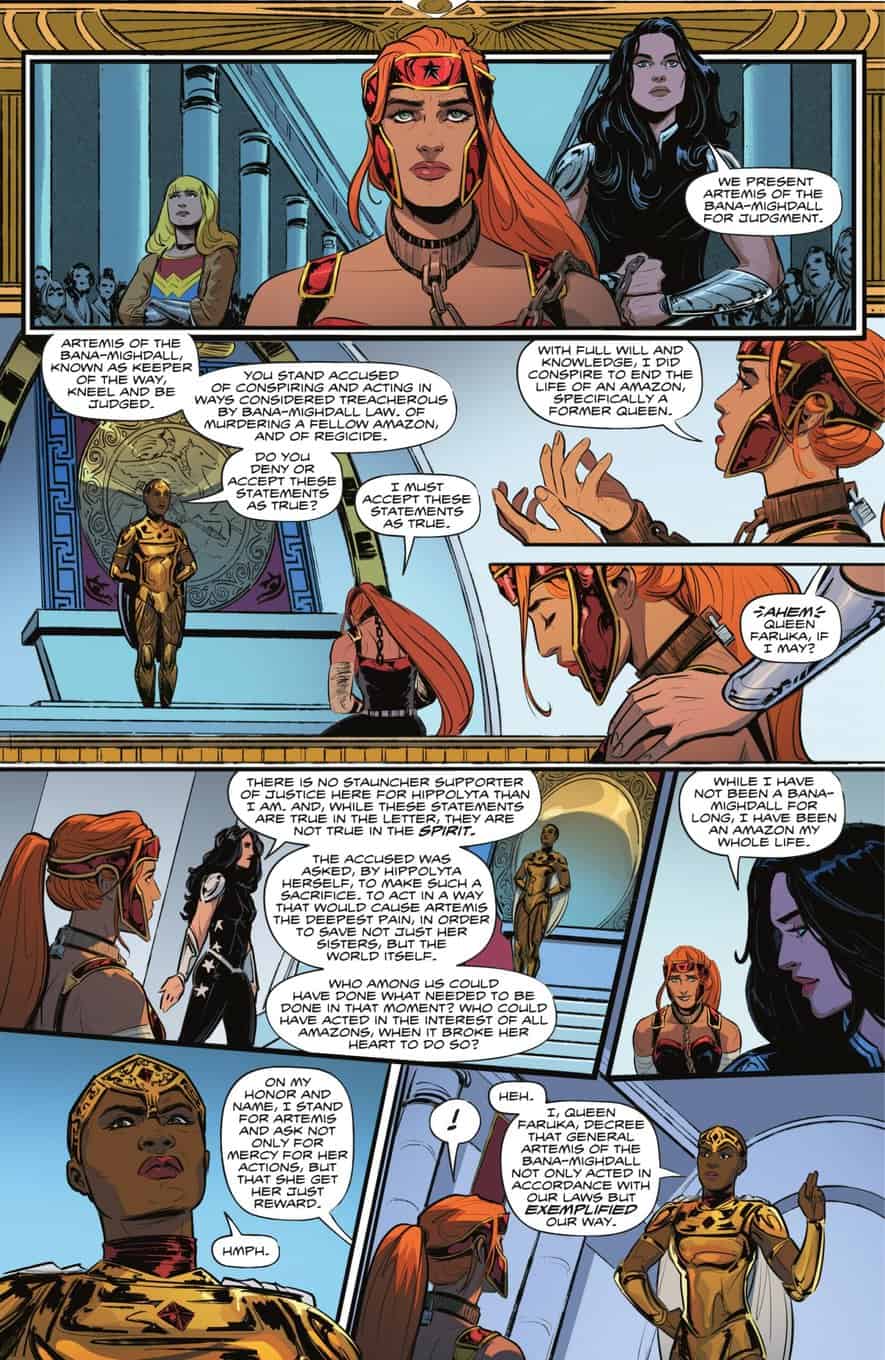 After a once bitter Donna Troy speaks on her behalf Artemis is essentially granted clemency and invited back to the Amazon fold. 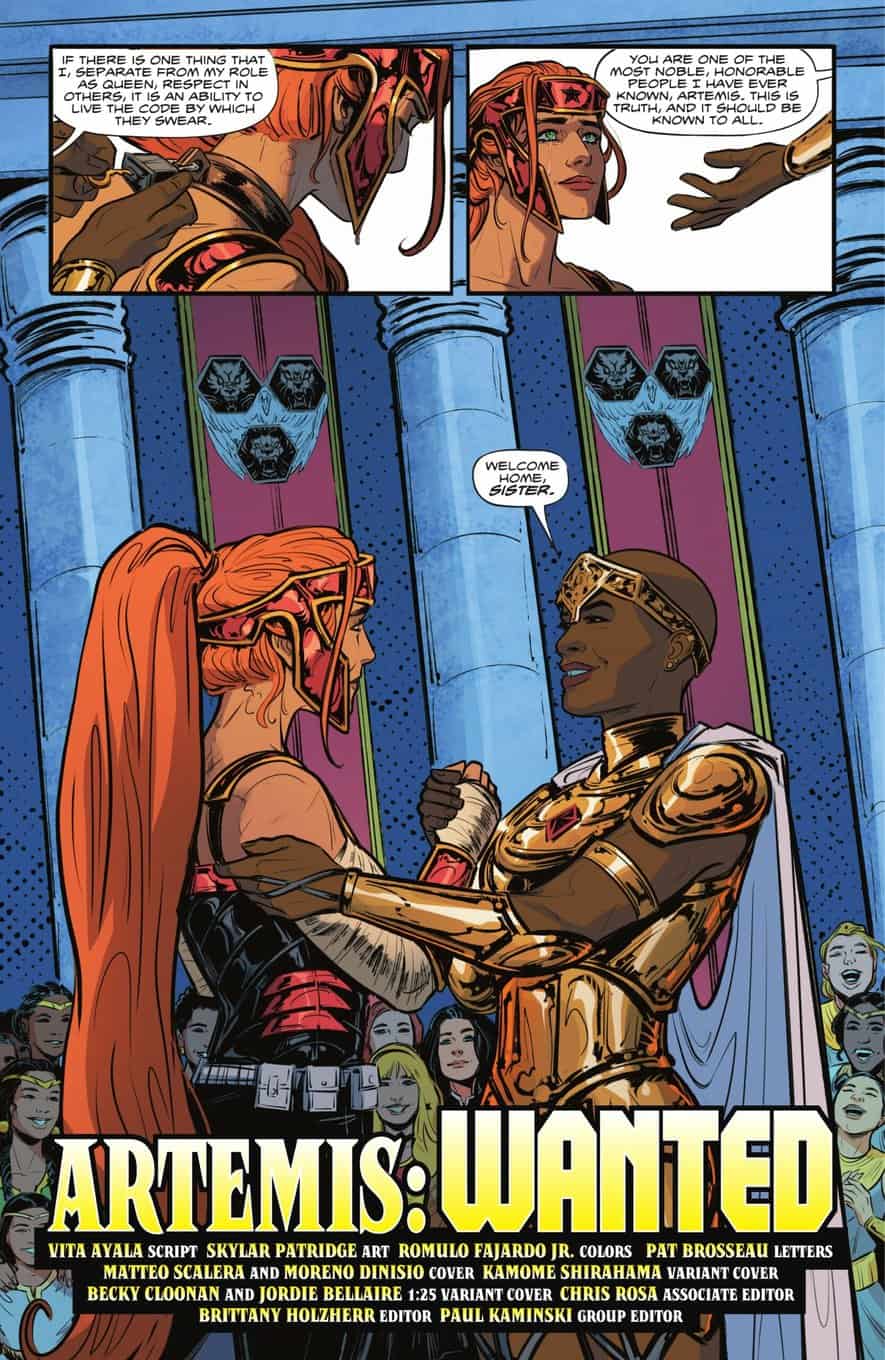 While I do like the idea of Artemis being on the side of right, a comic book series, limited or ongoing, where she’s hunted by Amazons and others, told in the vagabond or drifter vein of David Bruce Banner of the 1970’s Incredible Hulk TV series, had promise. 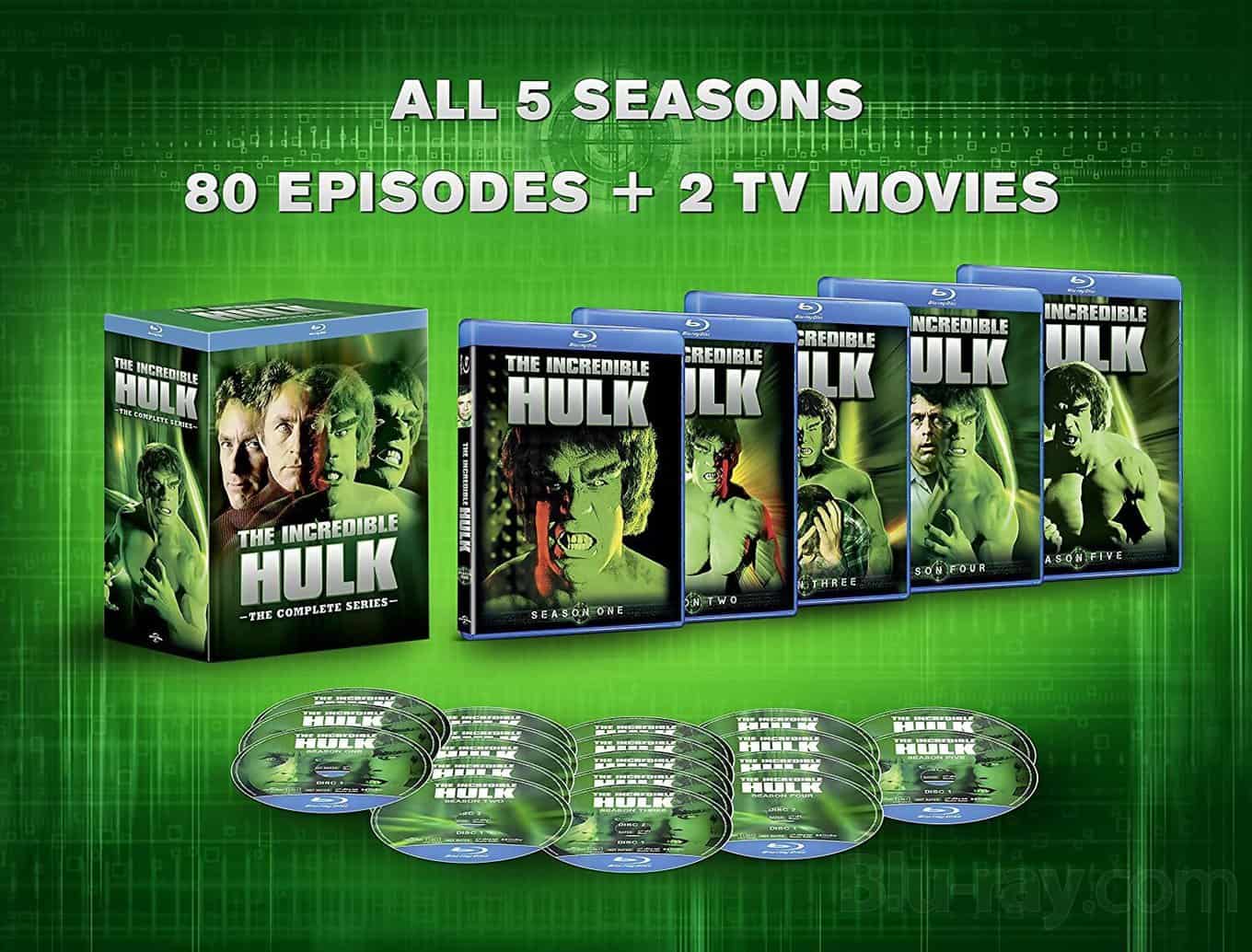 That said, the revelation of the goddess Hippolyta so soon after the Trial of the Amazons does seem to make that event series a bit irrelevant beyond making the Amazons and its leadership more diverse.

Superhero-themed Bingo Rooms Could Be The Next Big Thing