Parker Bordeaux Is All Elite With AEW & Part Of New Trustbusters Faction!

Parker Bordeaux Is All Elite With AEW and Part Of New Trustbusters Faction!

Parker Bordeaux formerly Harland on WWE NXT 2.0 before being released is now All Elite. 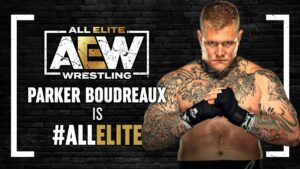 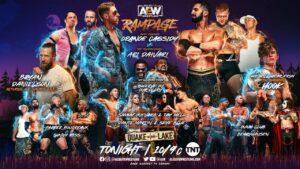 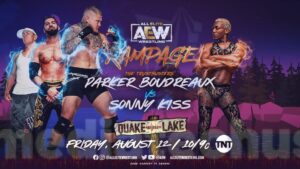 …The TrustBusters’ Parker Boudreaux (with Slim J) vs. “The Concrete Rose” Sonny Kiss!

Parker rammed Sonny into the turnbuckles and blasted him with stiff shots. Sonny fought back with an uppercut. Parker chokeslammed Sonny and then drove him down again for the pin!

“He made it look effortless,” said Jim Ross… 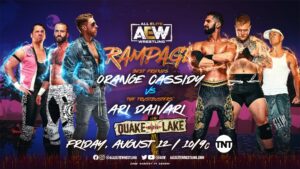 Ari: “I’m going to give you one last chance to join the TrustBusters. All you have to do is lay down.”

Orange played mind games with Ari and rolled out of the ring. Orange returned to the ring and he and Ari chain wrestled with Orange getting the upper hand.

Ari nailed Orange with a neck breaker on the middle rope! Ari applied a sleeper to Orange.

Orange escaped but both men collided as they connected with lariats to one another, both having the same idea. Cassidy connected with a diving cross body press. Ari used a neck breaker but then Orange countered with a suplex!

“Orange is trying to will his way back into this thing,” said Jim Ross.

Orange blasted Ari with a thrust kick. Orange tried for the Orange Punch but Ari countered for a near fall! Orange planted Ari with a DDT! Orange followed up with a diving DDT, spiking Ari Daivari twice in a row!

Slim J popped up on the apron but Chuck Taylor pulled him back down. Parker grabbed the Best Friends but Orange jumped onto Parker with a tope suicida!

Ari connected with an Iconoclasm on Orange for a near fall! Orange fired back with the Orange Punch and pinned Ari!

Orange stood up to Parker and Sonny Kiss ran down to even up the odds! Suddenly Sonny Kiss kicked Orange with a low blow, allowing Parker to chokeslam Orange! The TrustBusters celebrated with Sonny afterwards! 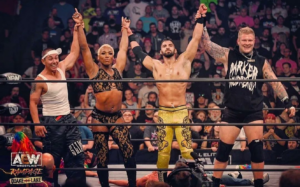 The Trustbusters gimmick appears to be about adults now spending through their own trust funds.