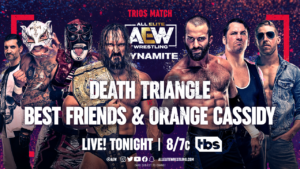 Death Triangle faced on with Best Friends and won the match!

That makes Death Triangle your new AEW Trios Champions and PAC a two-belt champion as he is also currently the AEW All-Atlantic Champion.