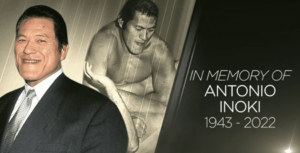 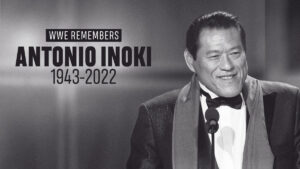 WWE is saddened to learn of the passing of WWE Hall of Famer Antonio Inoki.

One of the key figures in the history of Japanese wrestling, Antonio Inoki was among the most respected men in sports-entertainment and a bona fide legend in his homeland.

Born in Yokohama, Japan in 1943, Inoki grew into a natural in-ring competitor. The incredible squared circle figure found his greatest success in New Japan Pro Wrestling, a promotion he founded in 1972. Over the course of the next two decades, Inoki built NJPW into the most successful wrestling company in Asia. Utilizing talented Japanese competitors like Tatsumi Fujinami and Riki Choshu, innovative high-flyers like Tiger Mask and Dynamite Kid and American Superstars like Bob Backlund and Vader, the young promoter created a product that was unique, influential and far ahead of its time. In addition to running the company, Inoki himself was one of the top stars in NJPW, carrying the championship and battling the likes of Stan Hansen, Tiger Jeet Singh and Hulk Hogan.

In his most-famous match, Inoki fought boxing legend Muhammad Ali in a rare wrestler vs. boxer match in June 26, 1976 – a contest that paved the way for the advent of Mixed Martial Arts, which would explode in popularity decades later. The bout also exemplified Inoki’s undying love and respect for professional wrestling. This passion for competition earned him the nickname “Moeru Toukon” amongst his peers, which translates to “The fighting spirit that burns.”

Inoki was also a tremendous ambassador for professional wrestling, bringing major events to places like Russia and China. And in 2010, WWE did the same by welcoming Antonio Inoki into the WWE Hall of Fame Class.

WWE offers it’s heartfelt condolences to the family, friends and fans of the squared circle legend and the wrestling world as a whole.

On behalf of the IP team, I offer our condolences to the family, friends and fans of Muhammad Hussain “Antonio” Inoki.