Henry Miller is the kind of writer you discover in college despite the lack of hearing his name in any English classes. Showing up in a literature lecture with a copy of Miller’s Tropic of Cancer raised a few eyebrows. His tales of carnality while he lurked around France made prudent classmates act like his novels should only be stashed in a paperbag. Quiet Days in Clichy was one of the first books to read since it was his shortest book. After reading it, I had found out that there was a movie made in the ’70s. This proved to be extremely frustrating since I could track down a copy in the age of VHS. I couldn’t find a copy on Beta. After all these decades, Blue Underground is putting out Quiet Days in Clichy on 4K UHD. Now you can see it all at the end of October. Here’s the press release from Blue Underground with all the details:

Joey is a struggling writer with no money. His roommate Carl is a charming stud. Together, they live, laugh, and love their way through Paris. 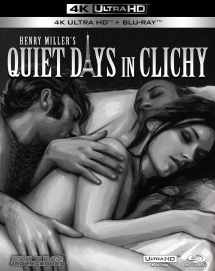 In May of 1970, the United States Government seized the only English-language prints of QUIET DAYS IN CLICHY on charges of obscenity. And while it was ultimately cleared in Federal Court, the film mysteriously disappeared shortly after its release. Now more than 50 years later, this landmark ‘adults only’ classic can be seen in a brand-new restoration, scanned in 4K 16-bit from its recently discovered uncut & uncensored original fine-grain negative, with Dolby Vision HDR and DTS-HD Master Audio!