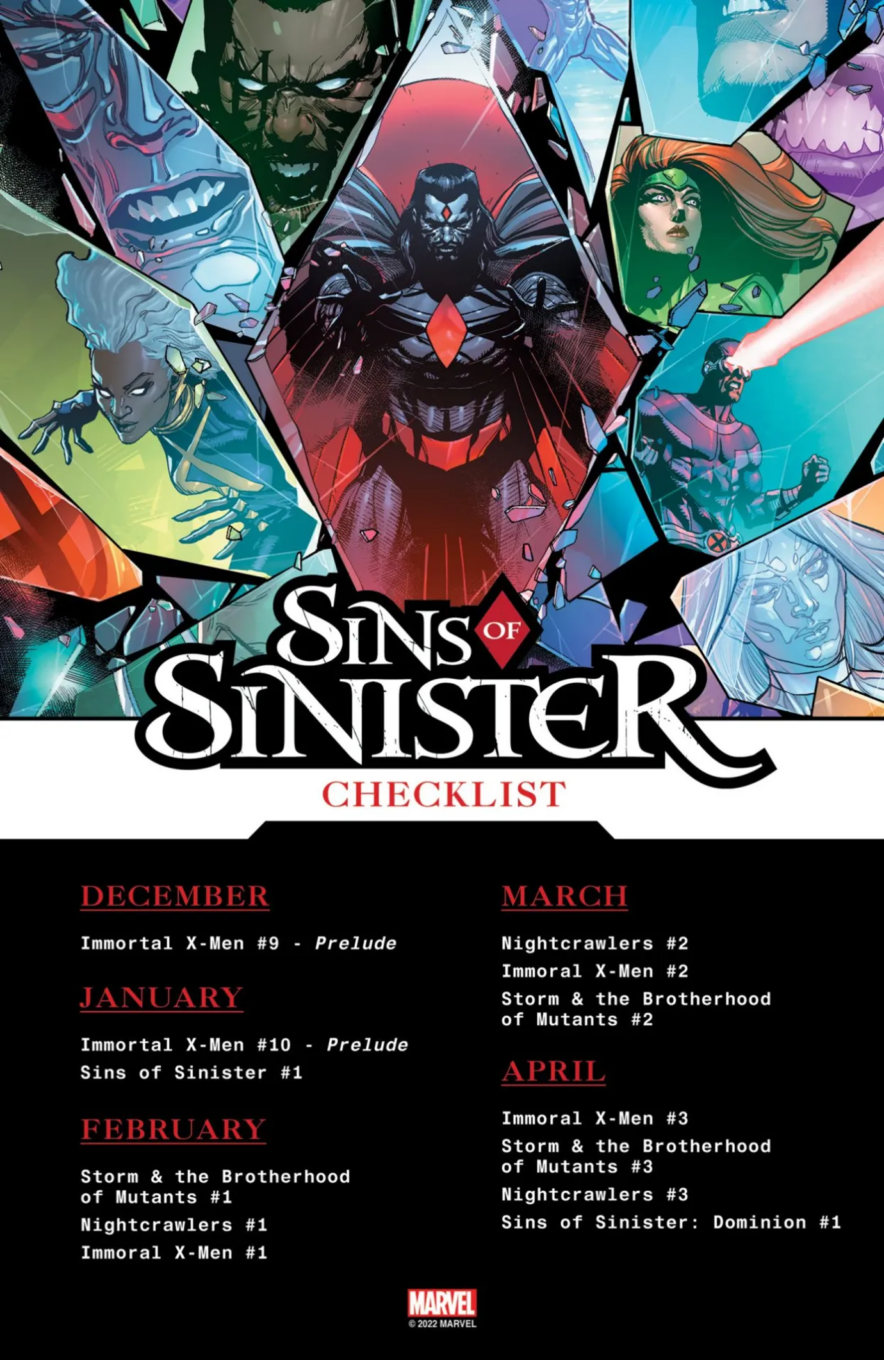 Amidst all the extraordinary comic storytelling year round , these are the epic Marvel Comics events to look out for in the months ahead… 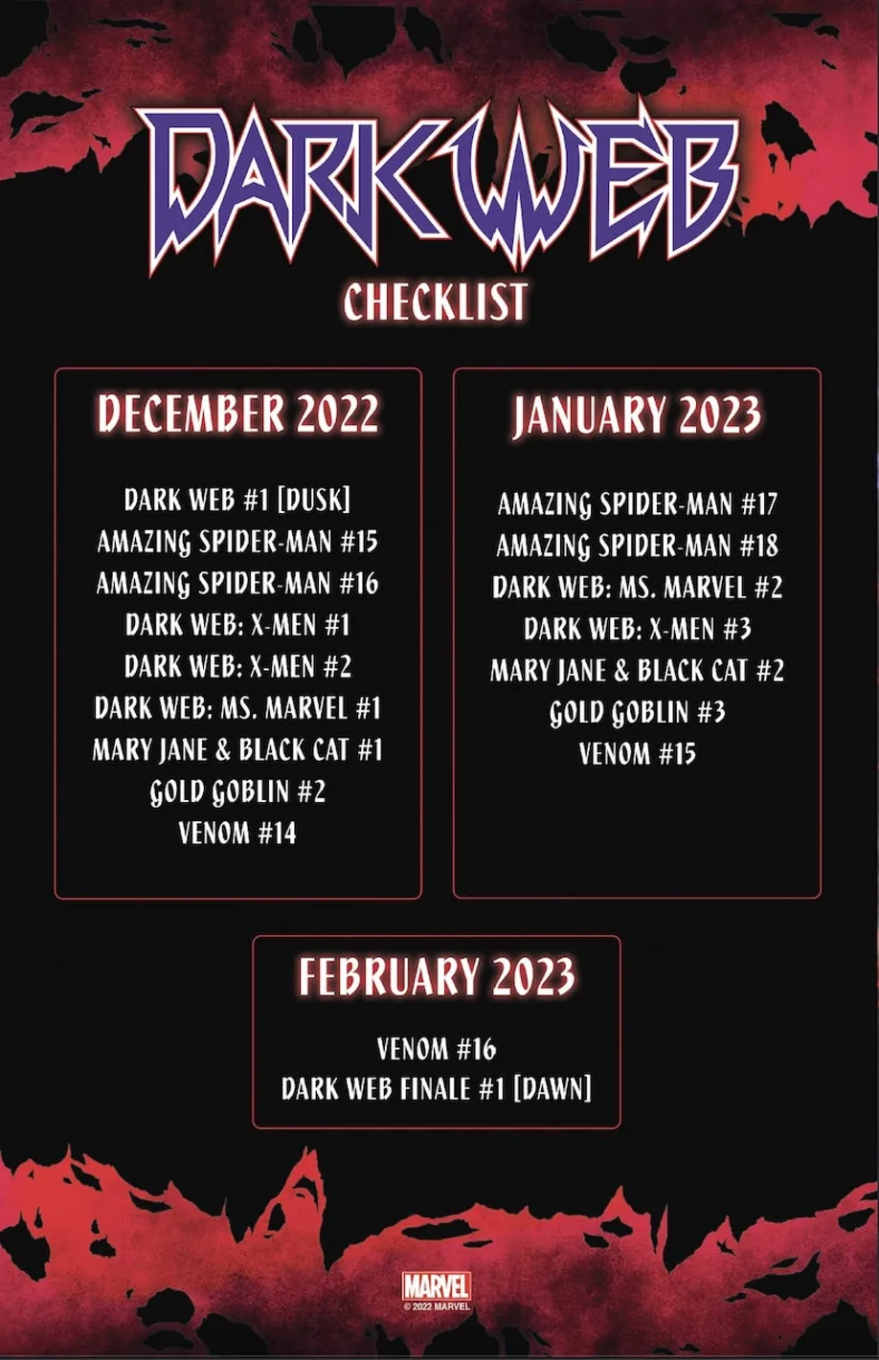 The future is Sinister at Marvel Comics. At New York Comic Con, the Marvel Comics: Next Big Thing panel unveiled next year’s slate of events, which kicks off with the thrilling conclusion to Jason Aaron’s AVENGERS saga in AVENGERS ASSEMBLE this November and carries through to FALL OF X in Summer 2023. 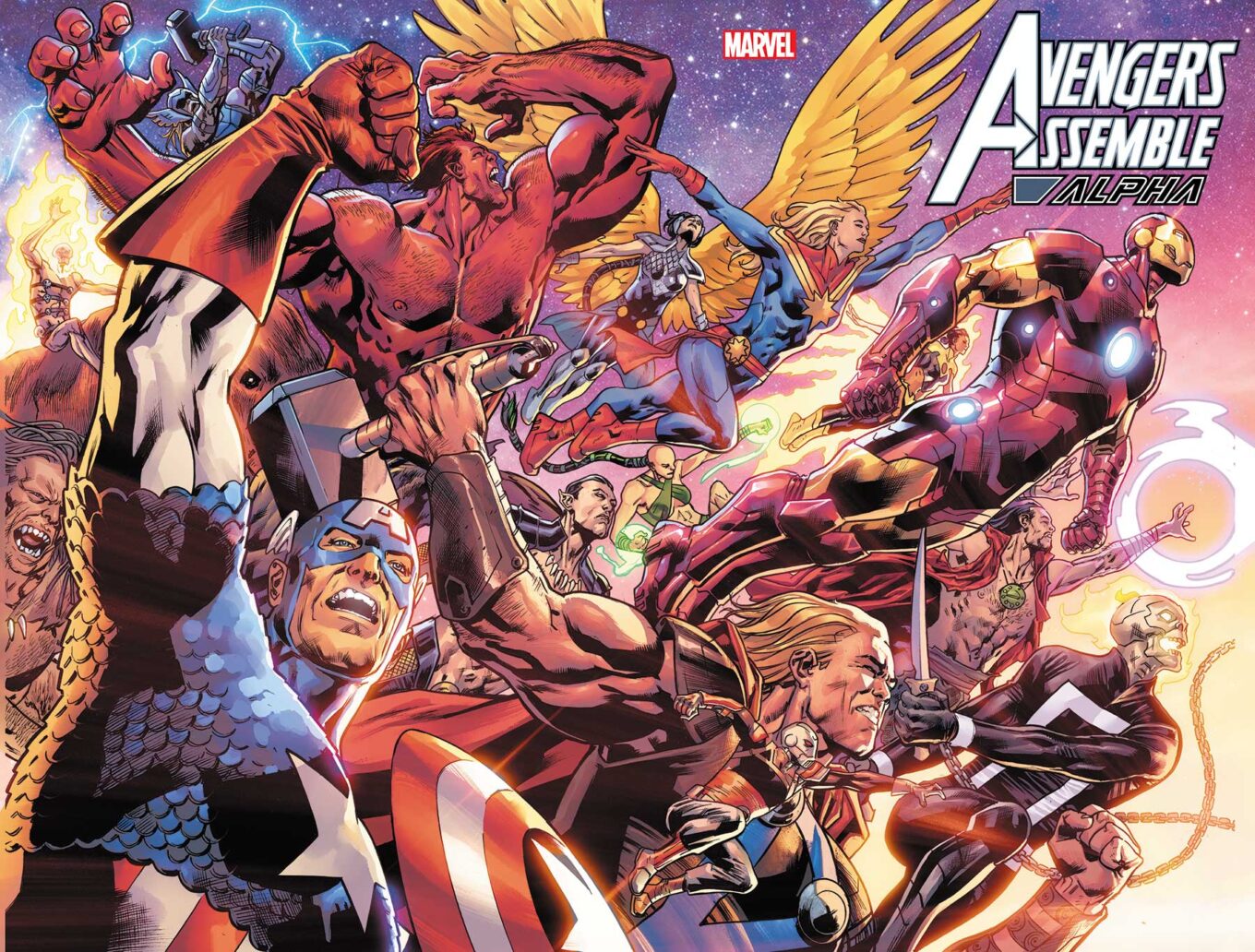 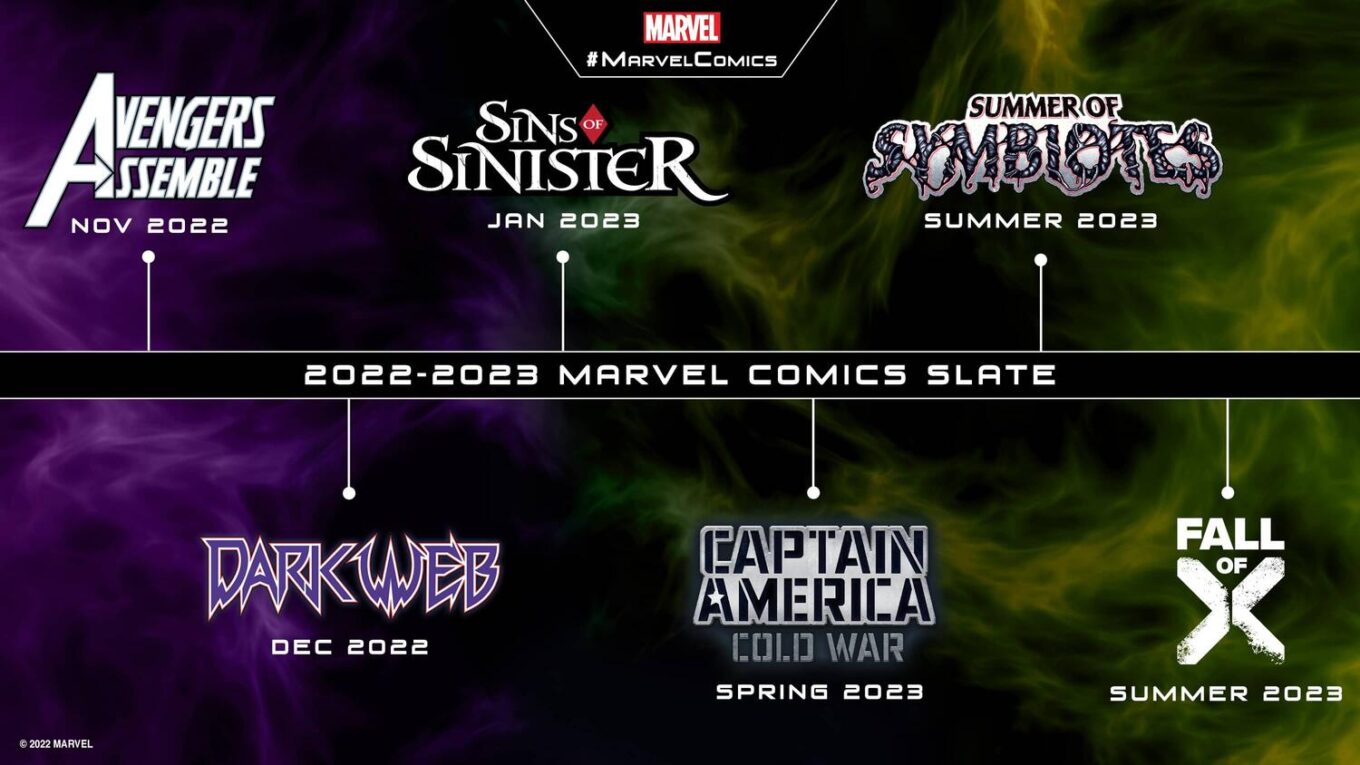 Visionary writer Jason Aaron brings his nearly five year run on AVENGERS to an incredible end. Joined by artists Bryan Hitch, Javier Garrón, and Aaron Kuder, Aaron will tie together his work on AVENGERS, AVENGERS FOREVER, and the AVENGERS OF 1,000,000 BC in a Multiverse-spanning saga that sees the Avengers go to war against an unprecedented army of villains and prove why they’re the Mightiest Heroes of All Earths!

The two spurned clones of the Marvel Universe, Madelyne Pryor and Ben Reilly, team up as Goblin Queen and Chasm to unleash their revenge in this Spider-Man and X-Men crossover that pays off decades of comic book storytelling! The dramatic event will fan the flames of the classic INFERNO crossover and impact Spider-Man, the X-Men, Venom, Ms. Marvel, and more in a series of tie-in issues and limited series.

Mister Sinister’s devious machinations yield the darkest Marvel Comics future to date in this universe-melting X-Men event. IMMORTAL X-MEN, X-MEN RED, and LEGION OF X will be transformed into IMMORAL X-MEN, STORM & THE BROTHERHOOD OF MUTANTS, and NIGHTCRAWLERS as this overarching saga propels further and further into an unforgiving universe where all things are Sinister!

Currently sharing the mantle of Captain America, Steve Rogers and Sam Wilson’s current adventures collide in this crossover between CAPTAIN AMERICA: SENTINEL OF LIBERTY and CAPTAIN AMERICA: SYMBOL OF TRUTH. A pivotal chapter in the 80-year history of Captain America, this espionage-fueled action thriller will be a culmination of various plot threads in this acclaimed new era including the rise of the Outer Circle, Nomad’s return, the brewing conflict with Wakanda and White Wolf, and Bucky’s new persona and mission…

Sun’s out, tongue’s out! Spinning out of titles like VENOM, CARNAGE, and RED GOBLIN comes a slew of new symbiotic stories. Get ready for the return of old faces, the debut of new symbiote heroes, and exciting shifts for iconic symbiote stars. It’s a season of symbiote insanity!

The X-Men hoped Krakoa would last forever. Time to find out if they were right…

In addition, the Guardians of Galaxy return some time in 2023 as well. 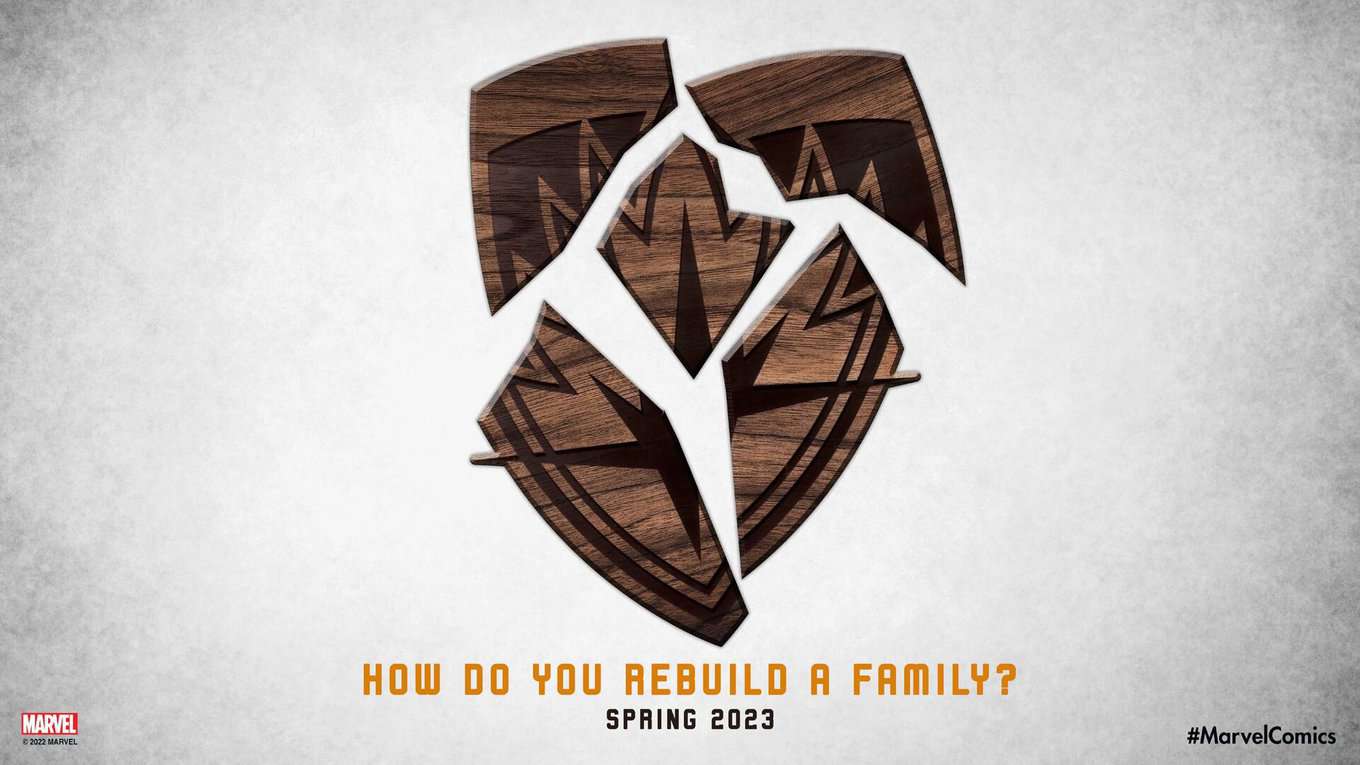