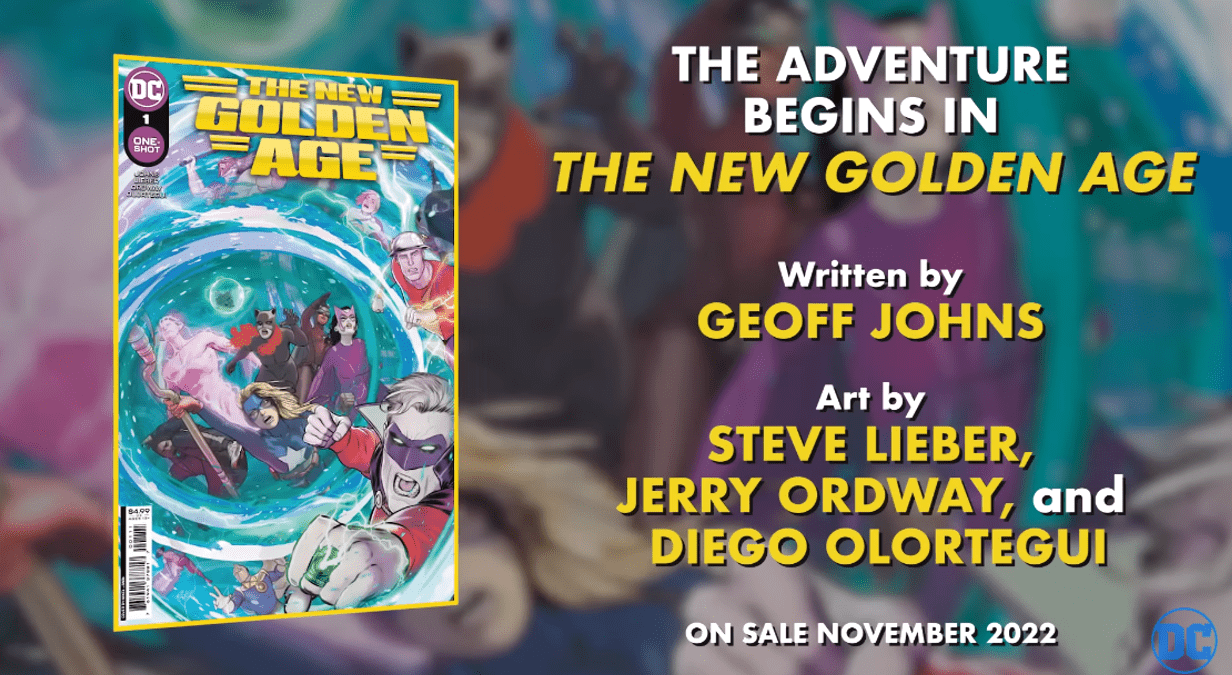 From the Justice Society of America to the Legion of Super-Heroes, The New Golden Age will unlock DC’s epic and secret-ridden history of heroism, launching a new group of titles set firmly in the DC Universe. From the 1940s to the 3040s, heroes take on the great evils of their time. But in the aftermath of Flashpoint Beyond, those heroes and villains will have their lives turned upside down. DC’s future…and its past…will never be the same again. But how are Mime and Marionette connected to this? Why are Rip Hunter and the Time Masters the most unlikable heroes in the DC Universe? And who or what is…Nostalgia? Don’t miss the start of the strangest mystery to have ever plagued the DC Universe.

We open in the near future of 2032 with time villain Per Degaton stalking Helena Wayne the daughter of Catwoman Selina Kyle and Batman Bruce Wayne. 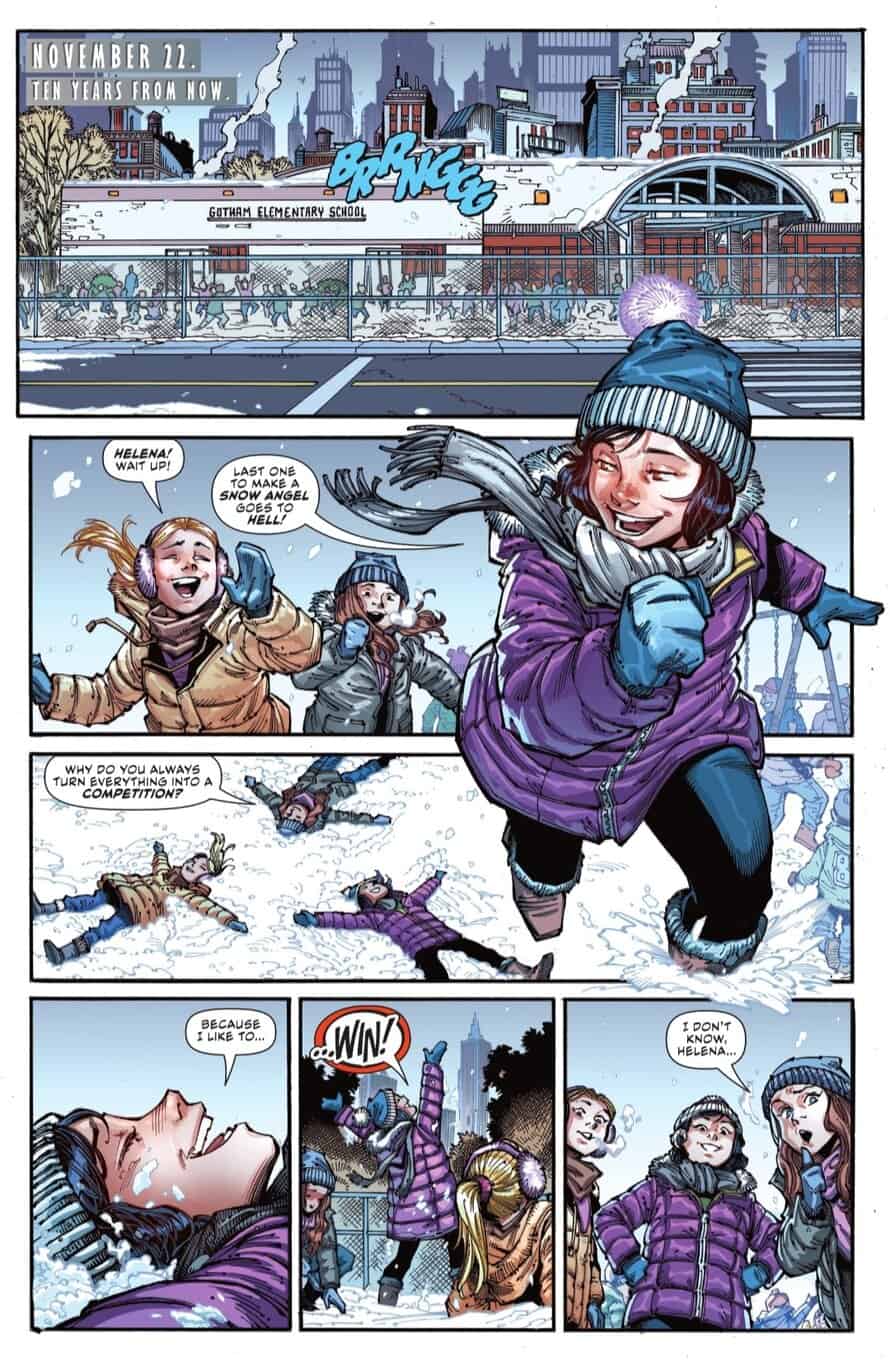 We then pivot the distance past in the Golden Age of 1940, at the moment the Justice Society of America (JSA) was founded where the Jay Garrick Flash teases his and his wife’s desire for a child while Doctor Fate is haunted by Children Lost, including the not-yet-born Judy Garrick aka Boom, to Per Degaton. 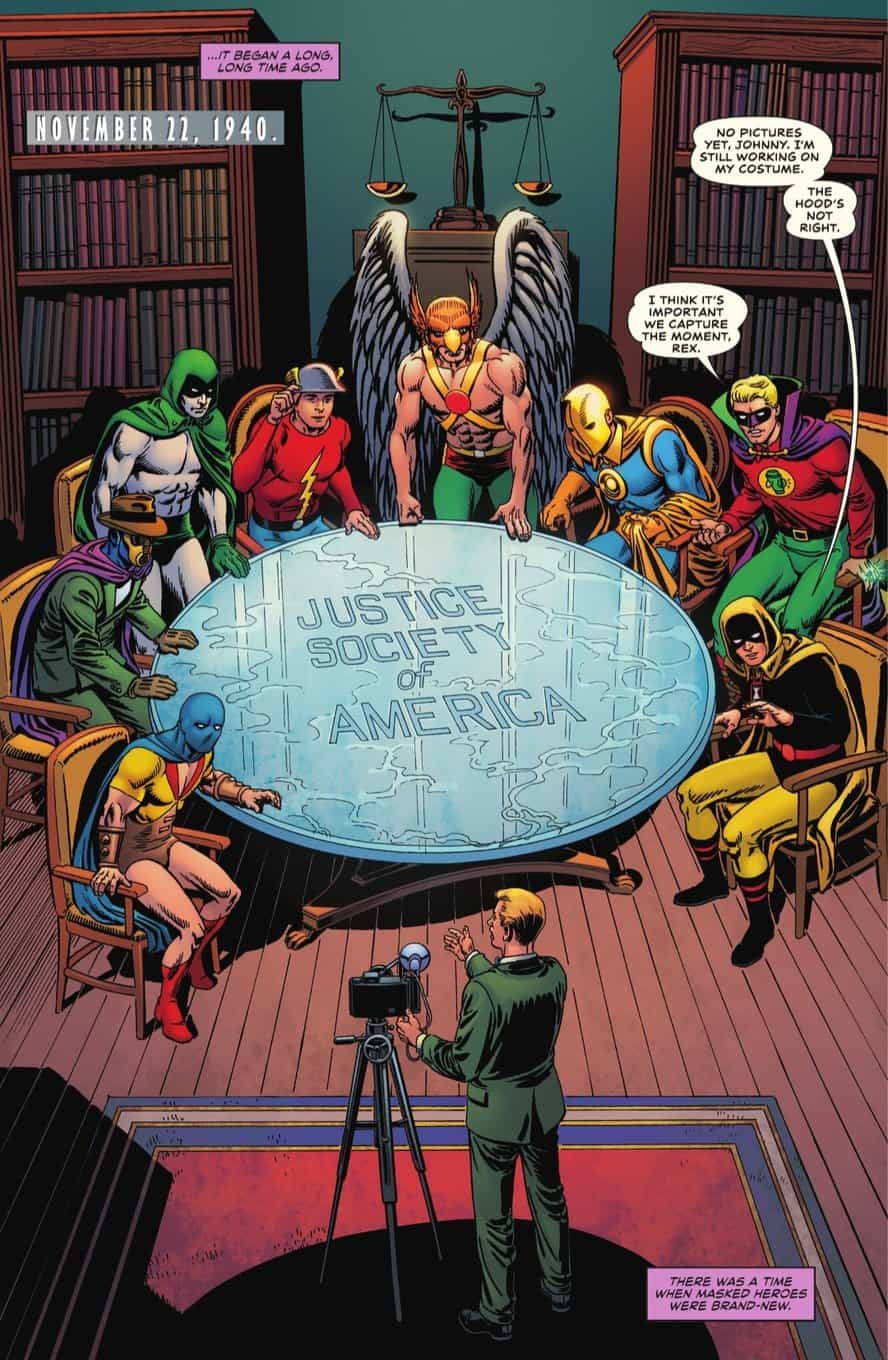 We then move to the far future and the age of the Legion of Super-Heroes in 3022. 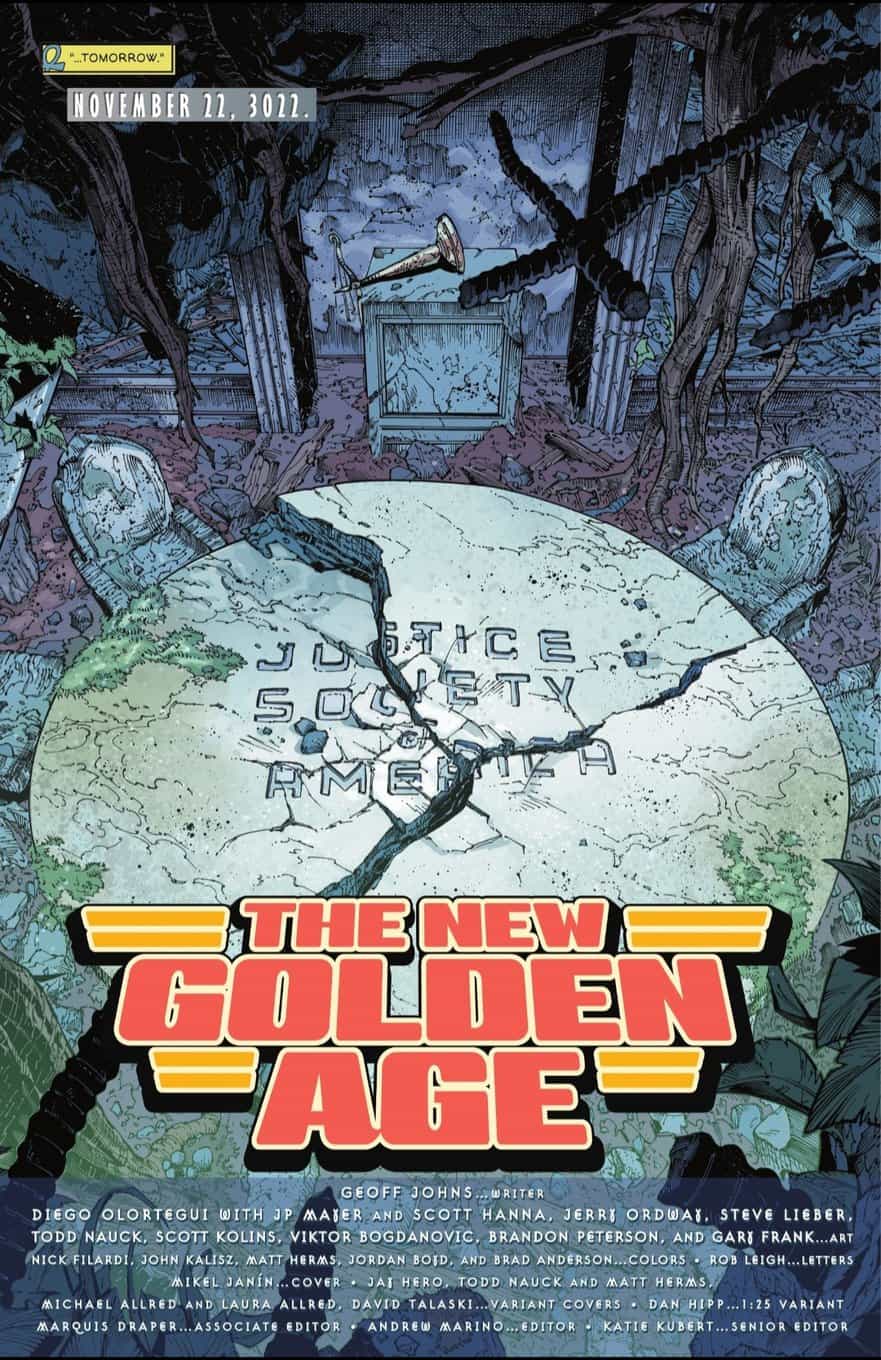 It’s a time where a new Justice Society of America emerges to rival a seemingly smug Legion of Super-Heroes and where that era’s Doctor Fate is killed by Pre Degaton. 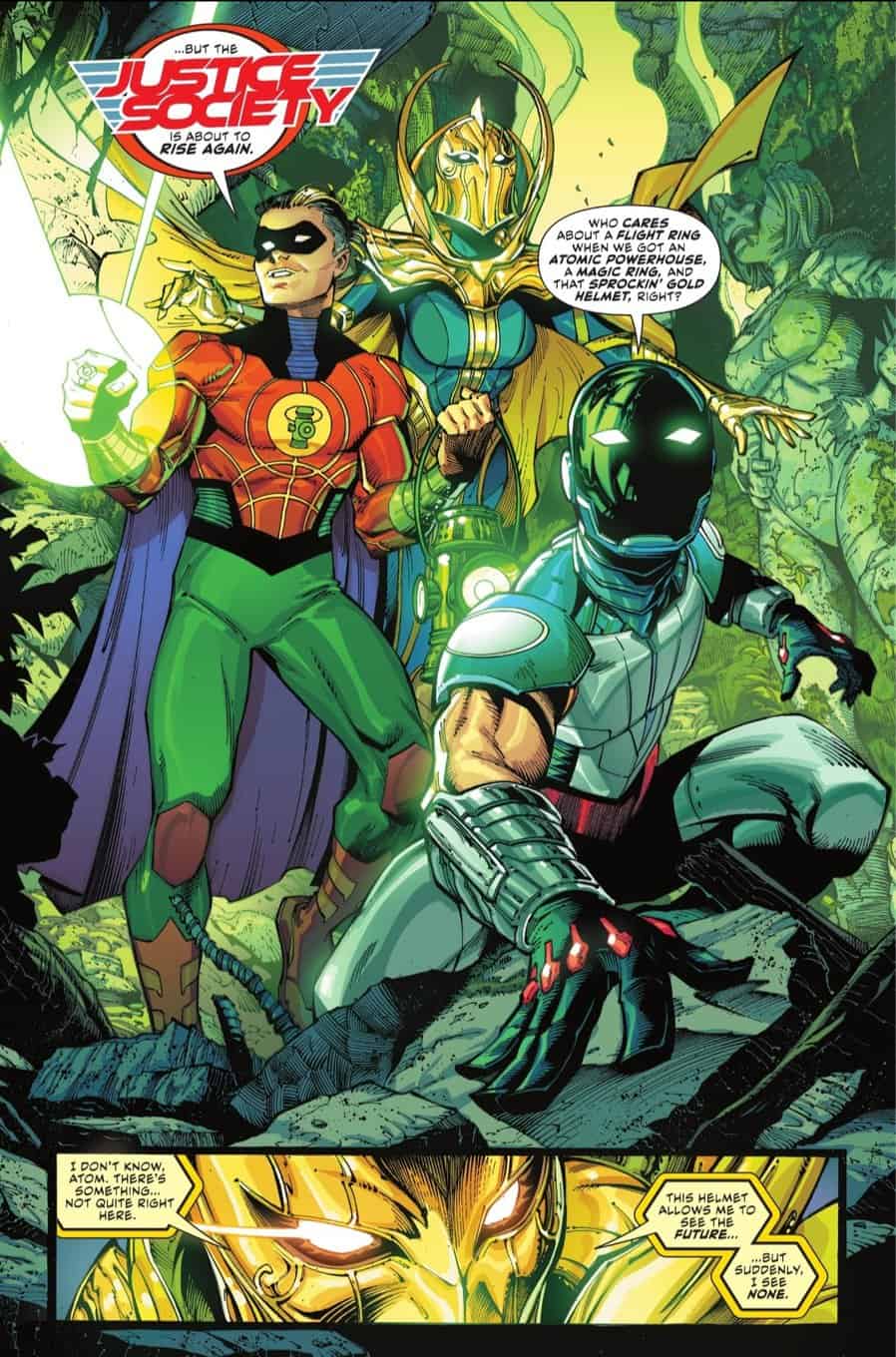 In 1976 an older Doctor Fate is still haunted by his 1940 visions of Lost Children as Power Girl and Star-Spangled Kid aka Skyman emerge before we head back to, presumably 1940, where the Alan Scott Green Lantern is haunted by his soviet rival the Vladimir Sokov Red Lantern as Per Degaton looms and the 1951 disbanding of the JSA is foreshadowed. 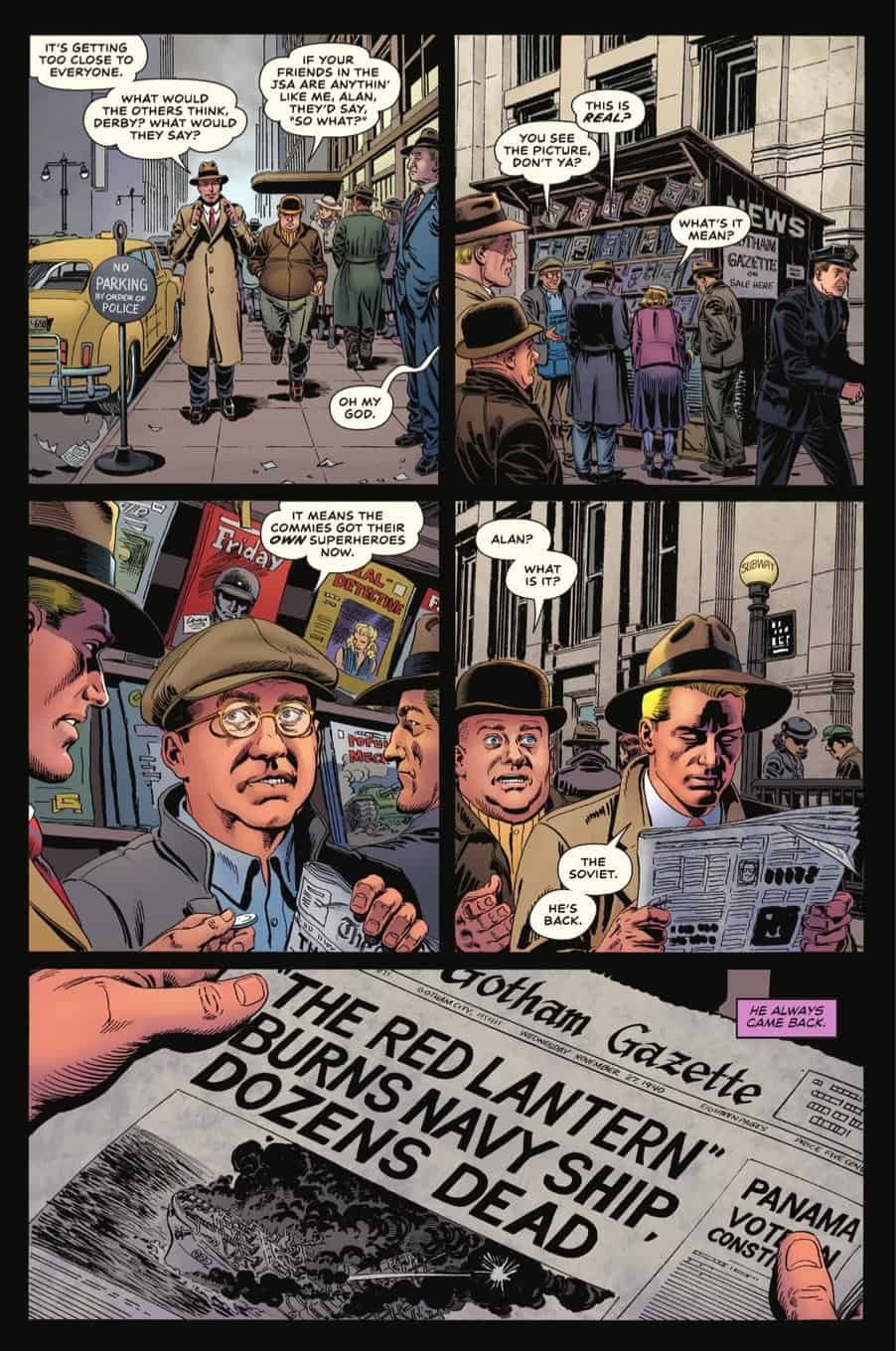 In 2032 Helena Wayne learns her father Bruce Wayne is Batman after she stabs him thinking he was an intruder. 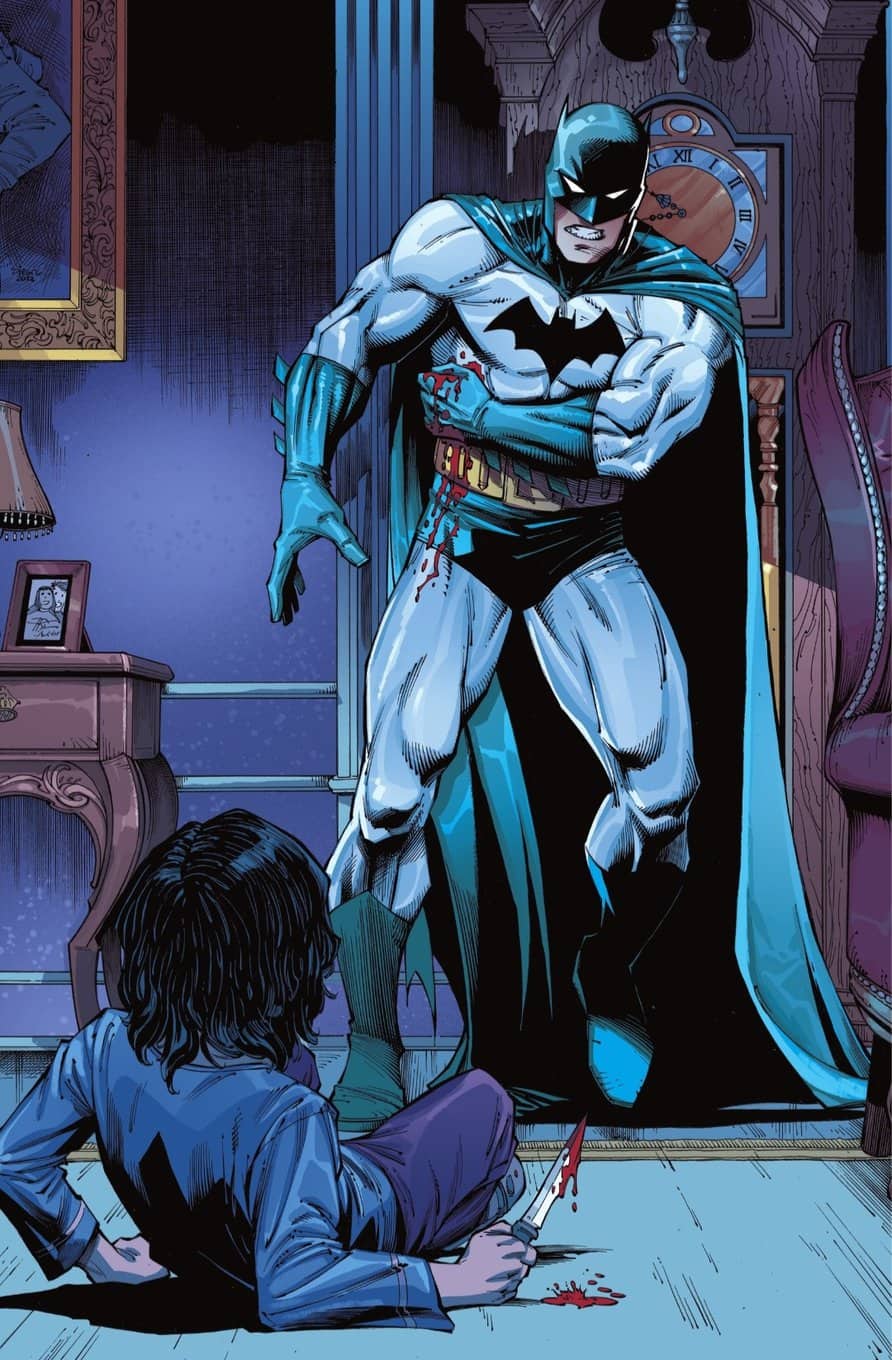 We then pivot to 2009 where Doctor Fate confronts Catwoman over a mystical bauble heist, that results in an unlikely scuffle between the two where readers get a vision on the Tower of Fate where Per Degaton has pilled up the bodies of 20 Doctor Fates throughout time that he has killed?! 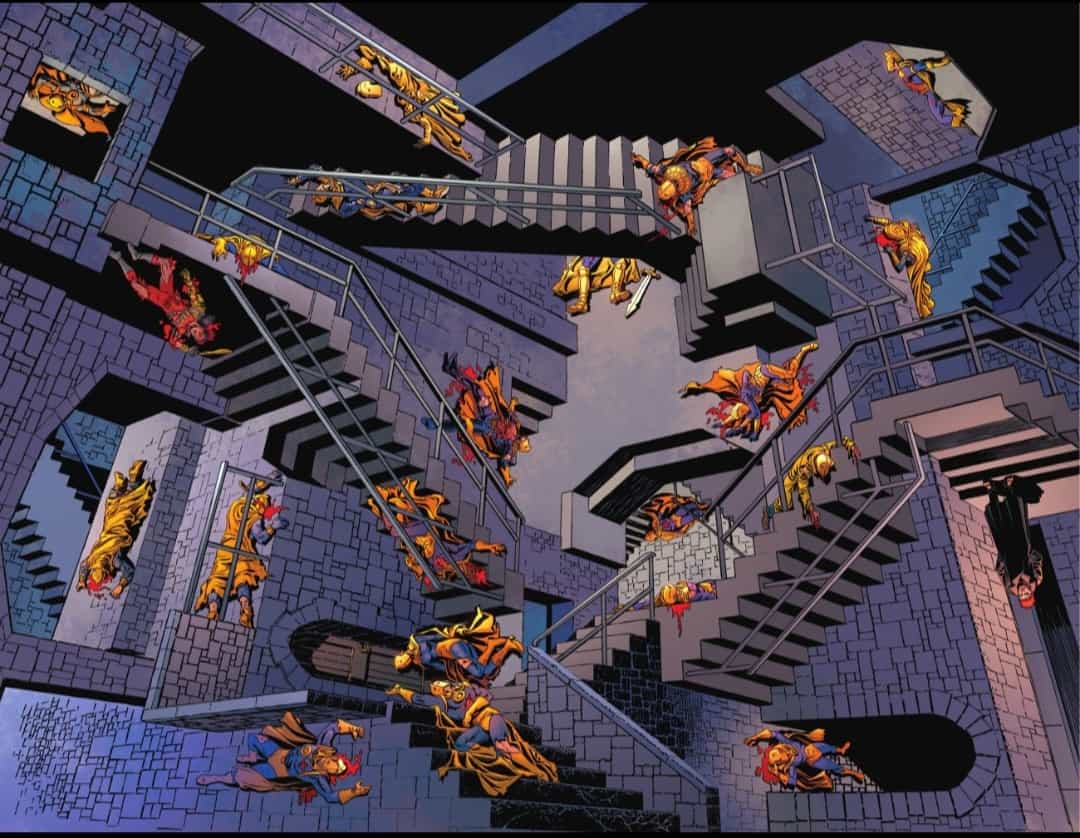 Doctor Fate then foretells Catwoman’s future and that of her daughter, who doesn’t exist yet, who is set to die with the JSA to which Catwoman laughs noting she never plans to have kids. 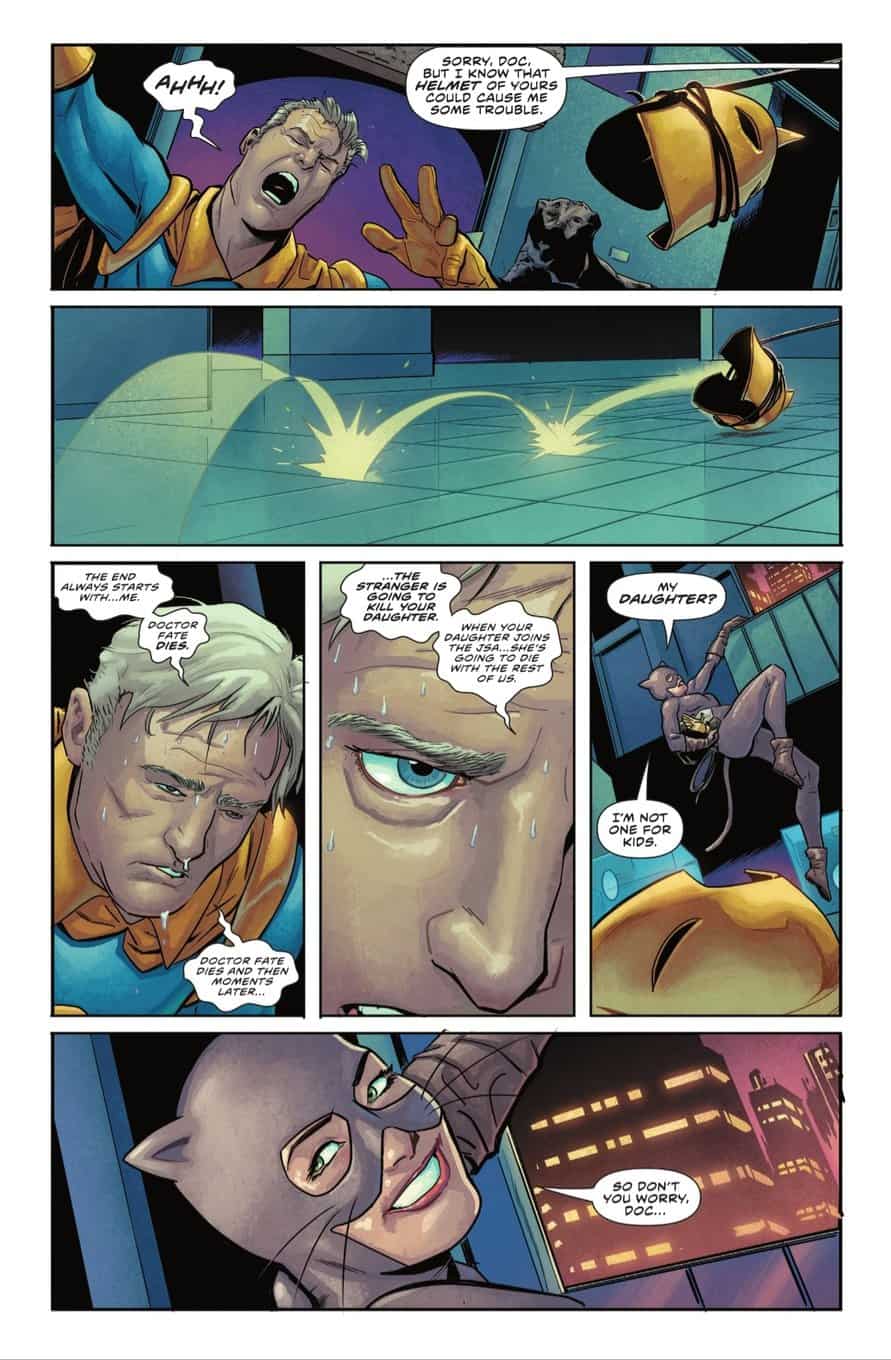 Which is ironic as we pivot back to the future 2032 where wife Catwoman is upset with husband Batman over their daughter Helena Wayne learning their costumed secrets including the fact the Joker’s son will be a future Robin as Per Degaton continues to stalk the youngest Wayne. 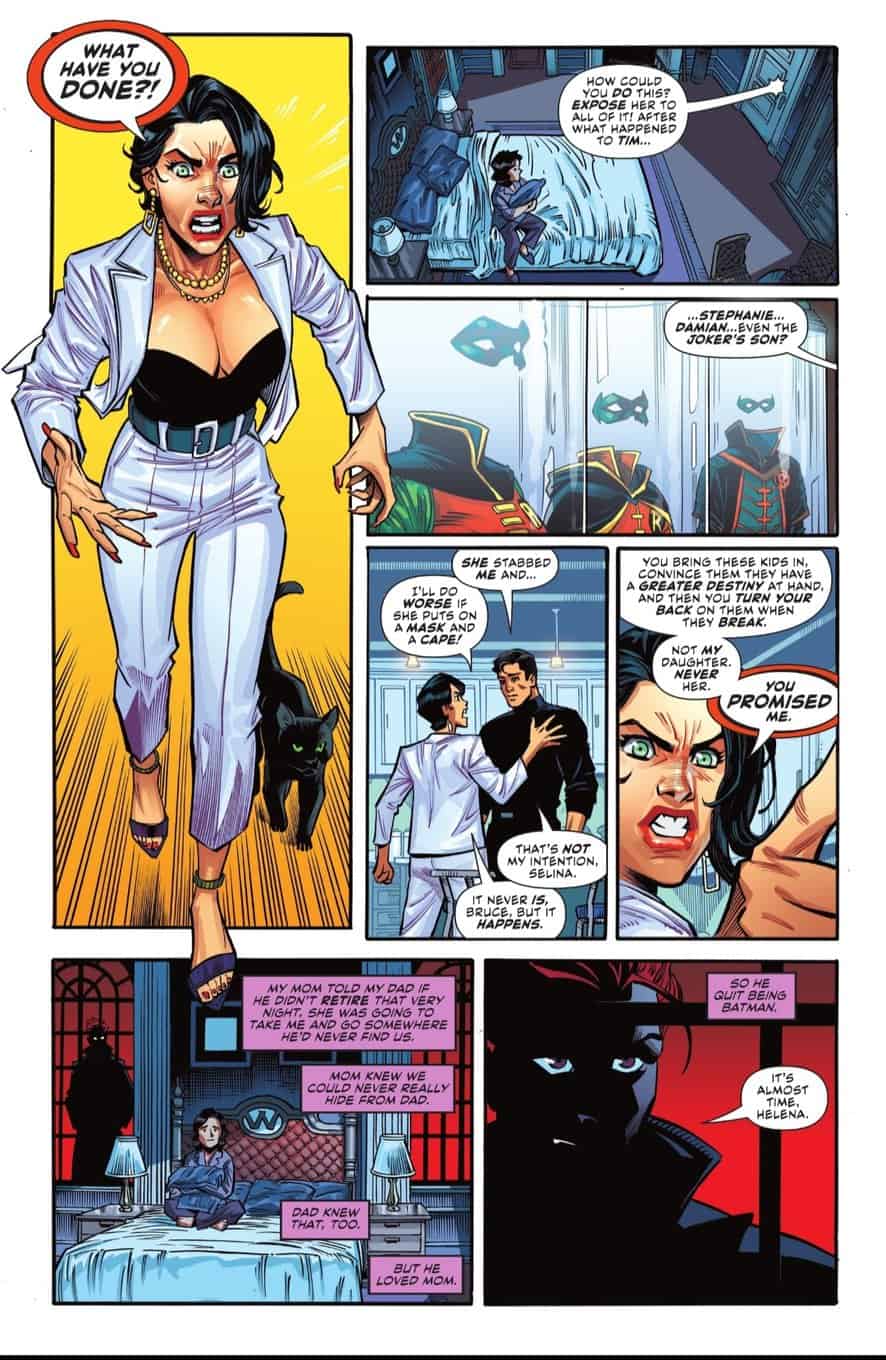 In 1848, yes that far back, we see the Time Masters recruit Corky Baxter as he confronted a young John Wilkes Booth who he told that he’ll be famous for 17 years later on April 15, 1865 assassinating United States President Abraham Lincoln; Booth seems mesmerized by the possibility of his historical infamy. 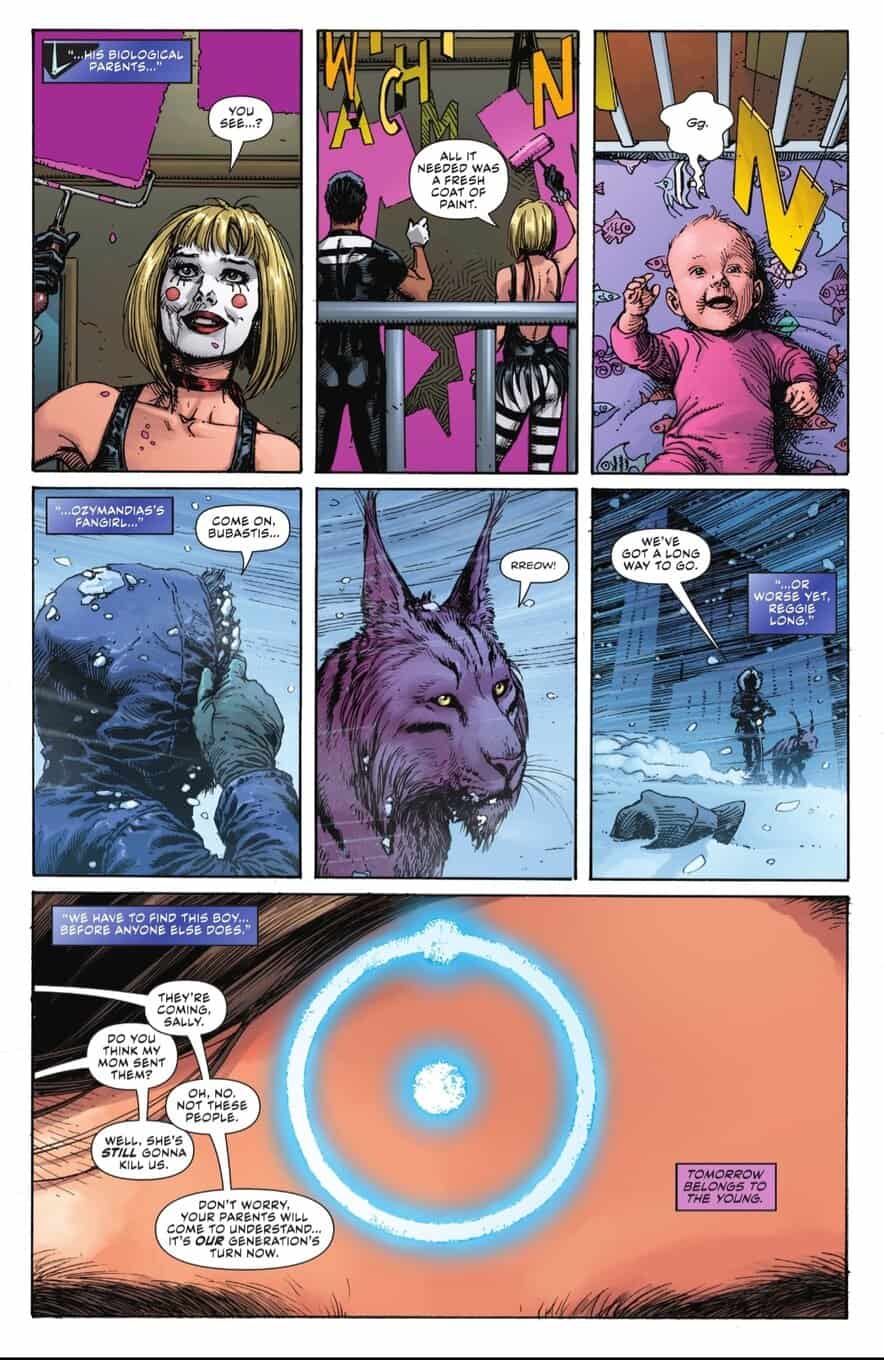 We then go back to the present in 2022 when it appears we see the child of the Watchmen / Doomsday Clock twosome of Mime and Marionette manifesting Doctor Manhattan. 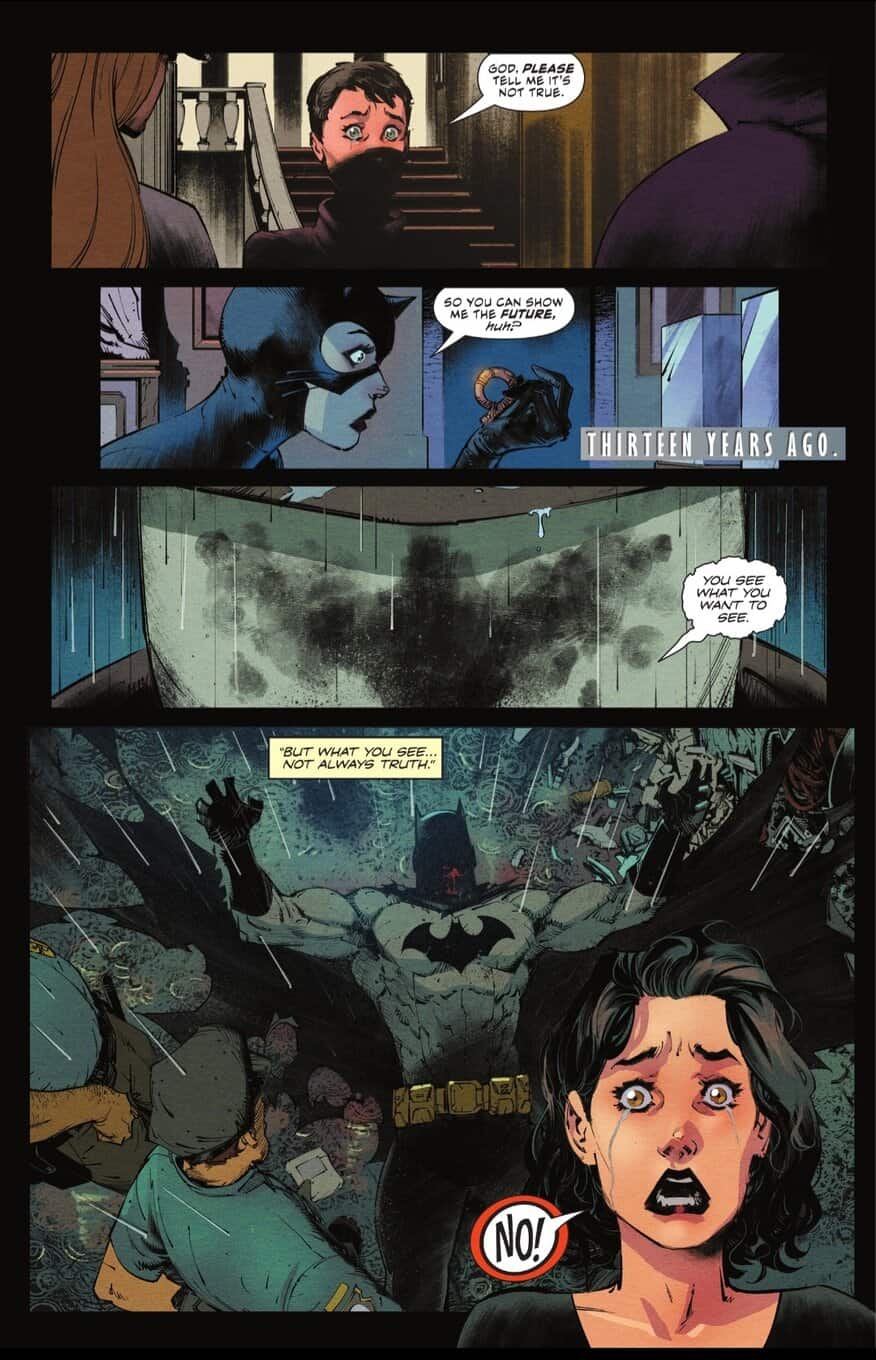 The book then ends over three page of overlapping timelines of 2022, 2009 and 2040 where we see a now 18 year old Helena Wayne grapple with the murder of her father Batman as she is set to become Huntress and travel to the present joining the modern day Justice Society of America team in their new series. 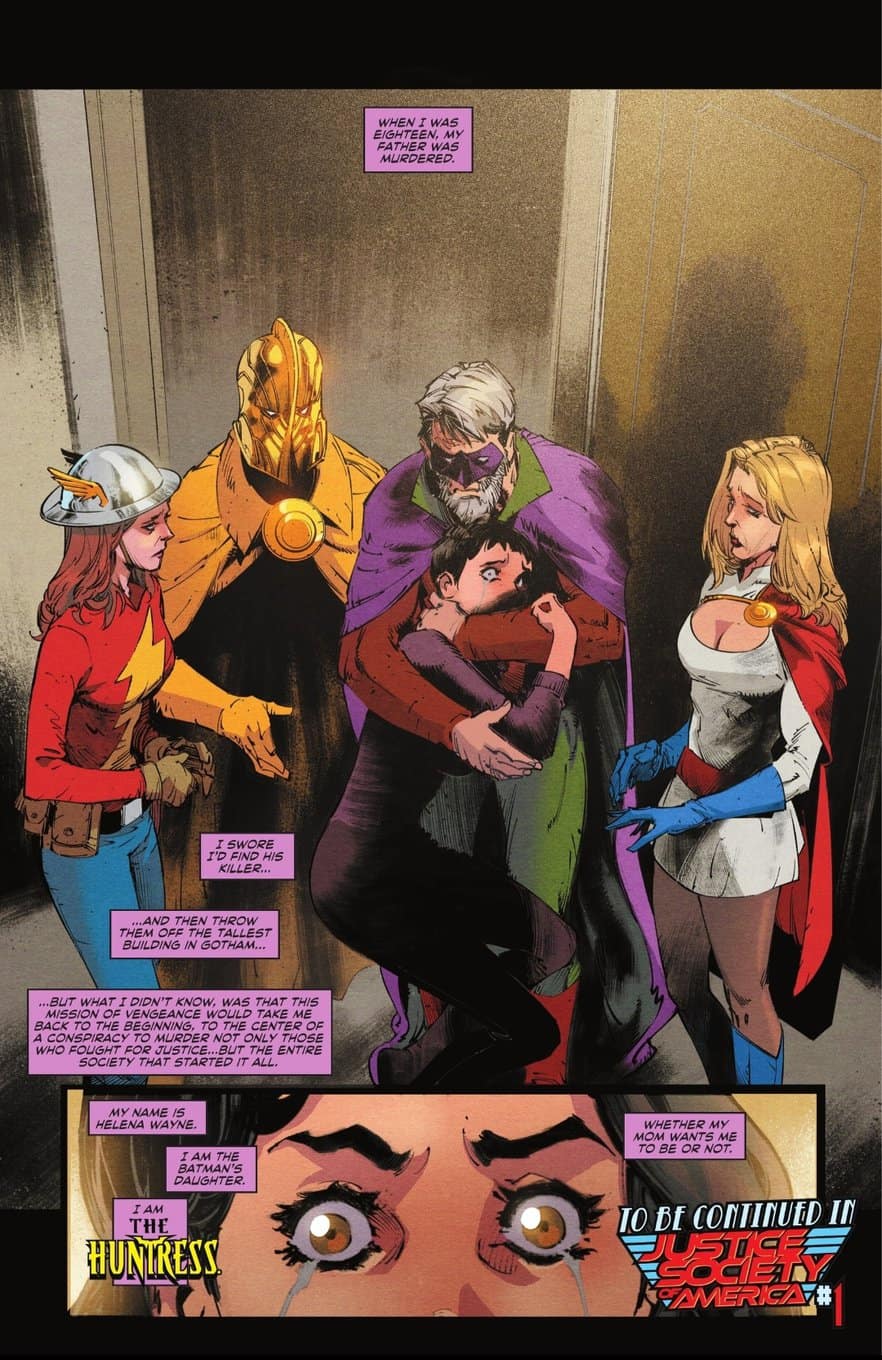 The book then ends with twelve Who’s Who type bios (full spoilers here) of The Thirteen that were restored to the timeline including this mysterious fellow. 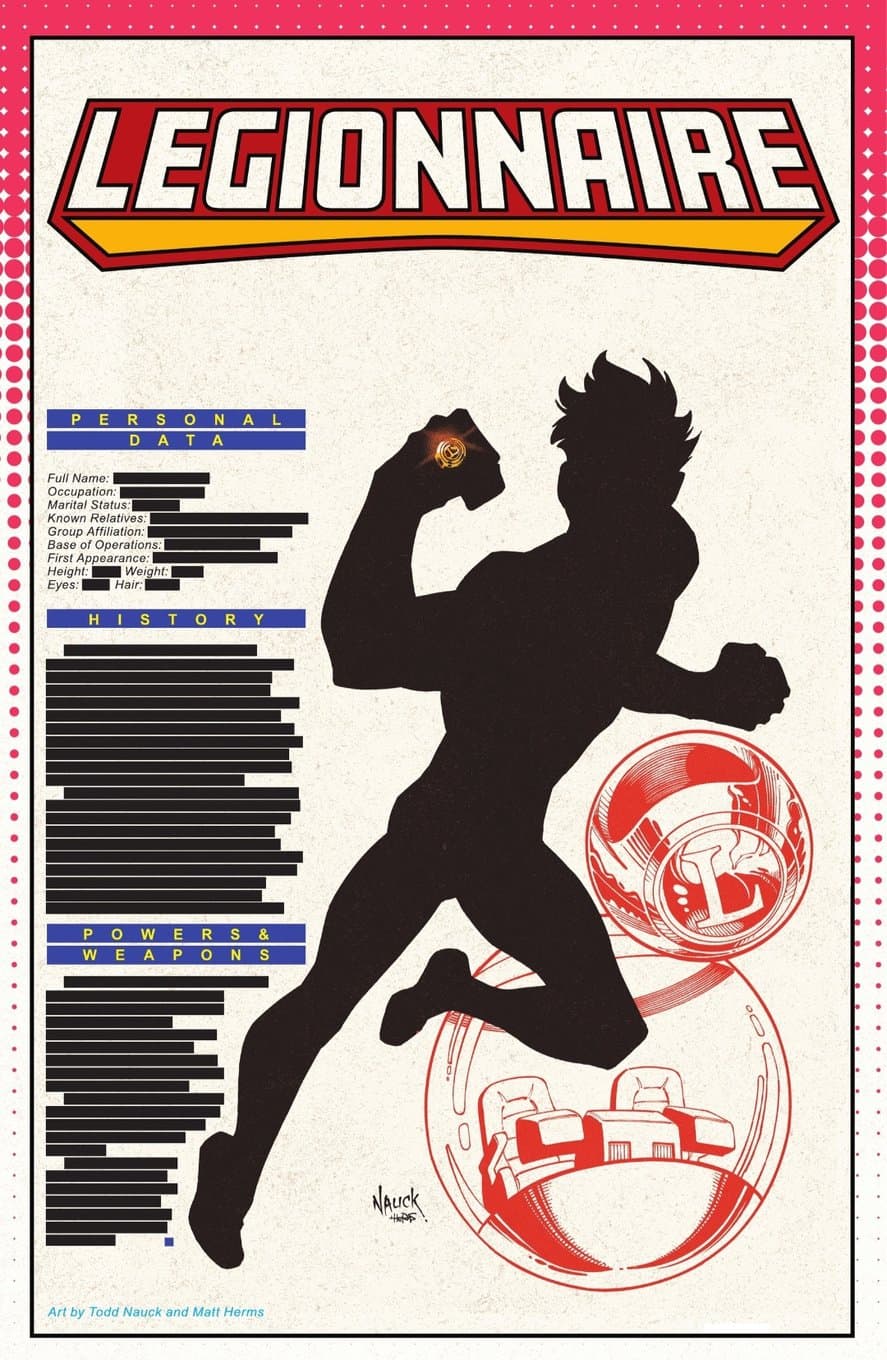 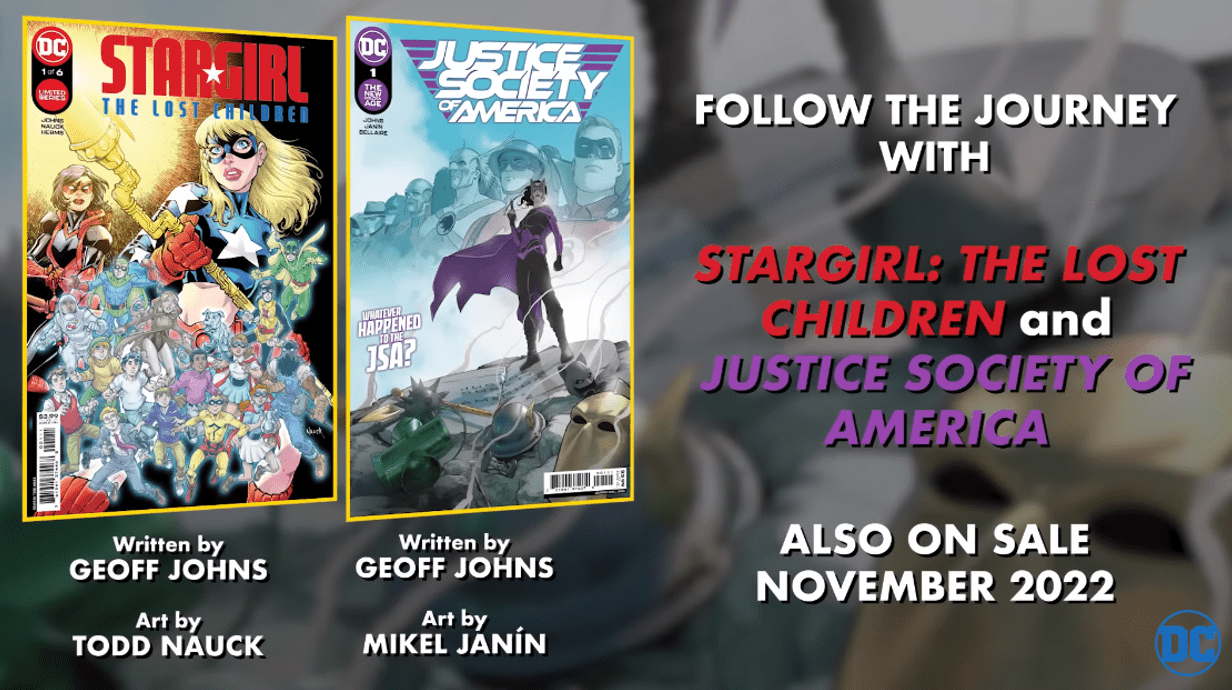 An action packed issue with some dizzying transitions across time, but with vibrant and eclectic art team rendering an overall story that was satisfying.  8 out of 10.