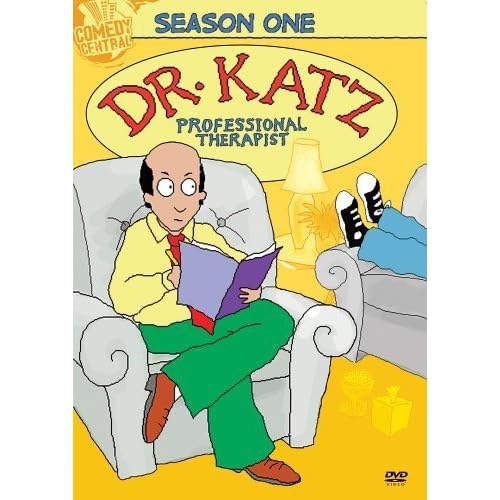 The EmmyÃ‚Â® Award Winning animated series’ first season has finally arrived on DVD. Sure, they’re all on one disc and there are only six episodes, but it’s quite a quality package.

The premiere episode ‘Pot-Bellied Pigs’ sets up the status quo for the show; Dr. Katz treats his patients by letting them “vent” comedic bits. It also introduces us to Ben, his slacker son. The comedians showcased this episode are Bill Braudis and Dom Irrera.

‘Bully” features more of Ben’s arrested development via a discarded stuffed animal and the debut of Dr. Katz musical styling. This episode also features “before they were huge” celebrities Joy Behar and Ray Romano as Dr. Katz’s patients.

The video looks just a good as it did on Comedy Central, which means it’s not that impressive. Little known secret; the show’s not really “animated.” The show didn’t look great then and it hasn’t been upgraded one bit.

Can anyone really complain about Dolby? It’s in Dolby. The show didn’t really have an impressive soundtrack, but everything sounds very crisp and clear.

There are plenty of Special Features, but they’re either solid or not impressive.

The audio commentaries are funny, if you enjoy the show. They are insightful, in anecdotal ways, but not in regards to technical aspects. But the commentaries, especially those featuring Katz, Benjamin, Romano or series co creator Tom Snyder are pretty funny, although Dave Attell disappoints with his offering.

There are a few “Short Attention Span Theatre” shorts, which hold nostalgic value, but little else.

Also included is one of the original Squigglevision shorts, which was used to pitch the concept to Comedy Central.