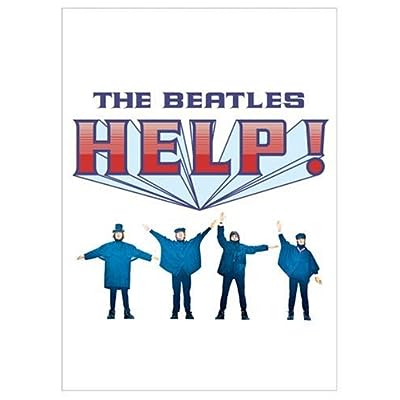 Before Richard Lester became known as the guy who ruined Superman II, he was the guy who directed the Beatles’ films. First he made the fictional documentary style A Hard Day’s Night, then worked together with the boys on this film. The mad cap, zany oddity that is Help!

The plot of Help! is completely ridiculous. Ringo gets a ring with a giant red ruby on it in some fan mail, so he wears it. It turns out, however, that the ring is a vital part in some sort of ritual sacrifice. He who wears the ring shall be sacrificed. Thus the life of Ringo and his fellow Beatles is in danger as a band of crazy men run around trying to complete their holy rites. It must also be mentioned at this point that the ring is stuck on Ringo’s finger; he can’t just take it off. Later two scientists become obsessed with the ring and join in the chase. It is only with the help of the beautiful Ahme, who is part of the cult, but doesn’t want to see the boys harmed, that they survive each attempt on their lives.

In his essay included with DVD, Martin Scorsese refers to this film as “Proto-Monty Python” and nothing could be further from the truth. Over flowing with silly narrative and non sequitur after non sequitur this film feels exactly like a Python flick. The only difference is it stars the Beatles and features seven Beatles songs that play no inherent role in the story. The is one particularly Python Moment where the film goes into intermission, then goes into Part Two which is just strangeness for about a minute before launching into Part Three. They even go to the Alps for no apparent reason.

It’s hard to judge the performances of the Fab Four. They’re basically playing themselves, and as Ringo says in the song, they seem to be “acting naturally.” They do the witty banter thing rather well and very little else is required of them. The rest of the acting in the film is okay, but nothing stand out. In fact, were this film made without the Beatles, it would be very easy to say that it is a bad film.

All the humor and enjoyment comes from the fact that it is The Beatles who are stuck in this preposterous situation. The scenes where they perform their songs are well shot and are pretty much the birth of the music video. It is easy to see that the guys are having a great time making this film and experimenting with some thing visually. Had they gone on to make a couple more films they might have made something quite amazing. Sadly though, this and the more straight forward A Hard Day’s Night were the only two films they made and must be enjoyed for what they are.

This film is presented in 1.75:1 widescreen. Sound is in Dolby Digital 5.1 Surround. This film has been wonderfully remastered and looks fantastic.

The Beatles In Help!: (30 min.) This is a really good featurette about the film that even mixes in audio interviews with the band to nice affect. They spend a chunk of time talking about how the band was smoking a lot of pot during this time, which is pretty funny.

A Missing Scene: (4 min.) Don’t be tricked into thinking you’ll get to see this missing scene. This is just people talking about the scene and describing it. Richard Lester talks about why it didn’t work and a girl who was in the scene and thusly cut from the film talks about how disappointing it was.

The Restoration Of Help!: (11 min.) The process they went through to make the film look this good is fascinating. The men who are doing it and talking about it are not. They are very boring and make this hard to watch.

Memories Of Help!: (6 min.) Cast and crew reminisce about the film. This is nice, but nothing special

The Inside Pulse
This is a strange film that will delight hard core Beatles fans and most likely baffle everyone else. It is a fun film if nothing else and will make you laugh a few times. It’s worth a rent for sure. Can’t say I’d recommend it for purchase.