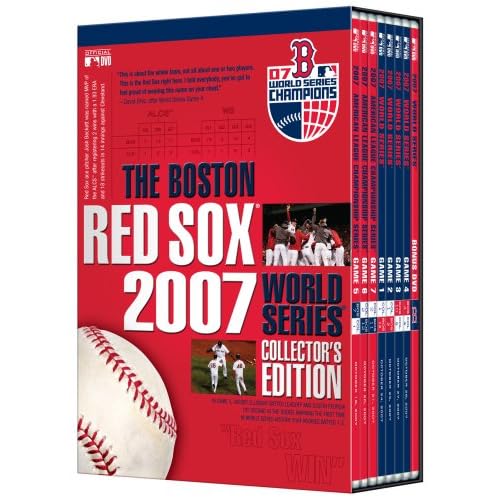 The Games
Spoiler Alert!!! Please stop reading this review if you don’t know which team won the 2007 World Series and want to be surprised at the ending of this boxset. Forget the spoiler alert. Since this isn’t called The Colorado Rockies 2007 World Series Collector’s Edition, the identity of the victors might already be ruined for you. Stop reading now to avoid a spoiler about which player gave America free tacos with his stolen base.

Has it really been a grueling three years since the Boston Redsox won their last World Series? Doesn’t quite have the ring of an 86 year “Curse of the Bambino” being broken. To toddlers in New England, this was a lifetime of disappointment being lifted from their diapered lives. Finally, they could potty train in peace. The Boston Red Sox 2007 World Series Collector’s Edition allows the tykes to relish the final three games of the American League Championships and the four game World Series sweep. The contests ended well past their bedtimes. Now they can know what happened before their parents woke them up to see the final strike out.

The missing first four games of the American League Championships will tick off completionists. Game one had the Sox’s Josh Beckett dominating from the mound as the hitters tore into C.C. Sabathia, the Indians’ ace. A chowderhead could easily enjoy rewatching the 10-3 victory. However the next three games were New England nightmares especially Game 2 when the Sox gave up 7 runs in the 11th inning. Eric Gagne went up in flames instead of being the legendary flamethrower. Down 3-1, it looked like the Indians would be playing the Colorado Rockies for their chance to end a World Series drought. But there was no sign of panic on the Redsox bench. This was a team that was down 3-0 against the Yankees in 2004. They knew 3-1 wasn’t fatal. This boxset begins with the complete game 5.

The Cleveland Indians attempted to play head games with Sox starter Josh Beckett by having the pitcher’s ex-girlfriend sing the National Anthem. Instead of being rattled, Beckett strikes out 11 and gives up only a single run. The Boston bats tore apart Sabathia. There would be game six back in Boston.

While the new members of Red Sox Nation expected the stars of this series to be David “Big Papi” Ortiz and Manny Ramirez, it was fresh faces that stole the series. Jacoby Ellsbury was a late season call up. He excited the team when they could have had their usual September swoon. Ellsbury started the post-season on the bench. With the Sox down 3-1 in the ALCS, manager Terry Francona called his name. Ellsbury and made an immediate impact with his bat and speed. Is it irony that Ellsbury became an Indian killer since his mother is member of the Navajo tribe? Besides being the best looking athlete in Boston after Tom Brady, Ellsbury gave America free tacos when he stole a base. Reggie Jackson might have been Mr. October, but did he give America free tacos?

Rookie sensation Dustin Pedroia proved he was ready for the big time. His first World Series at bat ended with a home run over the Green Monster. Starting pitcher Jon Lester would have an amazing season after battling cancer during his rookie year. Closer Jonathan Papelbon transformed into a superstar during the post season. Serial killers must study Papelbon’s stare. His glare instills fear in weak hitters before the wind up. His legend flourished with his post-series celebratory Irish step dancing to the Dropkick Murphy’s “Shipping Up to Boston.” No longer would it only be thought of as the theme to The Departed. These farm club talents wouldn’t have to defect to the Yankees to capture the World Series glory like Roger Clemens, Wade Boggs and Sparky Lyle.

Was this a great World Series? The Rockies arrived in Fenway on a major hot streak having gone 21-1 and rested for over a week. Fox announcers Joe Buck and Tim McCarver saw this going to six or seven games. They predicted the Sox would be screwed up when they arrived in Denver. How could the Sox win without a DH and the thin air? They thought every starting Sox pitcher not named Josh Beckett was going to be torched. For folks who hate listening to Buck and McCarver, you get the option to listen to either team’s radio crew call the game. It’s always good to listen to locals in the booth if you have a rooting interest. The folks on Yawkey Way want Joe Castiglione to call the homers. While two of the games were tight, at no point did the Red Sox jeopardize the entire Series. They were in control without fear. This Series will be best remembered for free tacos, step dancing and diving goggles. With the lack of the three losses to the Indians, The Boston Red Sox 2007 World Series Collector’s Edition is a pure victory lap for fans. There’s nothing in these games that could scare a toddler.

VIDEO:
The picture is 1.78:1 anamorphic from the HD broadcast of the games.

AUDIO:
The soundtrack is Dolby Digital Stereo. For those who want the hometown call of the game, you can listen to the Red Sox, Indians and Rockies broadcasting teams instead of the Fox guys. There’s also the Spanish broadcast of the games.

Manny Ramirez Walk off HR in ALDS Game 2 (3:29) has Manny being Manny.

Final 3 Outs of World Series and Clubhouse Celebration (7:58) demonstrates how to champagne-proof a locker room.

Interview with David Ortiz During the Red Sox Rally (5:12) has him holding the trophy inside Fenway.

Jon Lester on His Comeback From Cancer (0:52) is a solo interview. The following segments are interviews with the subjects in front of a white background. This is the raw footage.

Curt Schilling on the ALCS Comeback (1:14)

Jerry Remy on the Importance of Terry Francona to the Red Sox (1:32)

Jason Varitek on Helping the Young Players on the Red Sox (0:50)

Jason Varitek on Winning the WS and What He Did with the Game Ball (1:17) is only part of the story. Papelbon claims his dog ate the ball.

Terry Francona on the Night the Sox Won the AL East (0:36)

Terry Francona on How the Sox Never Panicked in the ALCS (0:44)

Terry Francona on Embracing David Ortiz after Winning the WS (0:27)

The Inside Pulse
The lack of the first four games of the American League Championship Series is frustrating for fans who want to relive the entire event. But for Redsox fans eager for the comeback against the Cleveland Indians and the sweep of the Rockies, this is perfect. You don’t have to listen to Tim McCarver and Joe Buck calling the game this second time around.