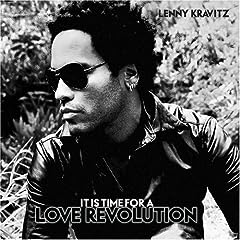 Make no mistake about it, Lenny Kravitz is a talented musician. Still, it seems he’s carved a nice little niche out for himself, basically making the same album over and over again. (Who am I to fault that approach when each one seems to continue selling?)

His latest effort, It Is Time for a Love Revolution, travels the same tried and true road of its predecessors, though there are solid glimmers of greatness on here. “Bring It On” excels in its overly simplistic rock approach, and the added dimension of the sitar is a fantastic little touch. “Good Morning” could almost draw comparisons to The Beatles and the deliberate rock beat mixes very well with the orchestration. And unlike earlier in his career, when the louder end of his approach worked best, Kravitz sounds best on the ballads these days—case in point, “I’ll Be Waiting”, a piano-driven heart-tugger that also benefits from heavy orchestration.

But they can’t all be hits. The title track tries hard to rock, but ends up coming across as bland. “Will You Marry Me” just tries too hard for it to be taken seriously at all. Everything else sort of blends together—it’s not bad, it’s just nothing new.

Kravitz has obviously found inspiration in many genres with a ’70s feel, and whether it’s funk, soul or rock, he does a great job blending it all together. Fifteen years ago, you were excited to see what he’d come out with next, though at this point, apparently, we’ve already heard it all before.