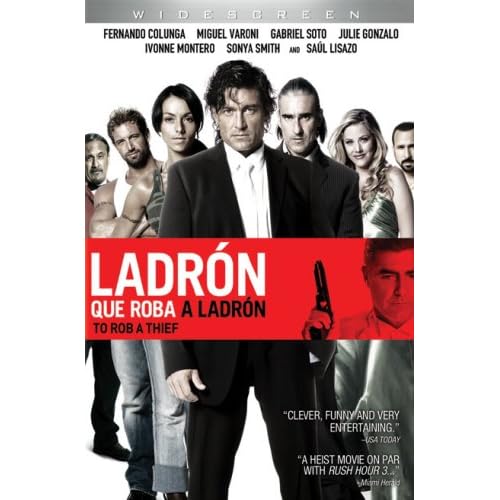 These days it seems that a good measure of whether a movie is truly great or not is to see how many films try to copy the formula that worked for a particularly good movie that had box office success. The more movies that attempt to copy a film, the better that film was or so it seems. If that’s the case, then Ocean’s Eleven must be a better movie than we originally thought. Ocean’s Eleven was great no doubt. It gave way to a couple of sequels, but it also gave way to a handful or more movies trying to copy that winning formula for themselves. They can throw twist after twist at us, but in the end these movies still seem like a poor imitation of the original. But you have to give producers and the big movie companies credit. They do come up with some creative twists to attempt to make their movie seem unique. Such is the case with Ladrón Que Roba a Ladrón a.k.a. “To Rob A Thief”.


In Ladrón Que Roba a Ladrón, two thieves, Alejandro Toledo (Fernando Colunga) and Emilio Lopez (Miguel Varoni), reunite to rob the biggest thief they know, Moctesuma Valdez (Saúl Lisazo). Valdez is a TV infomercial guru who’s made millions selling worthless health products to poor Latino immigrants. Valdez’s empire is next to impossible to infiltrate. But Emilio and Alejandro know if they go undercover as day laborers they can rob Valdez right under his nose. It’s a perfect plan, except that no one on their team wants the job. Refusing to give up, Emilio and Alejandro decide that they are going use real day laborers instead and quickly form a random crew of non-criminals to perform their biggest heist yet.

The translation of the title of the movie into English is a Latin-American proverb that means “a thief who robs from a thief will receive 100 years of forgiveness.” That can basically sum up the premise for this movie. But basically this is the Spanish version of Ocean’s Eleven with a little Robin Hood thrown in for good measure. Certainly not an unique idea for a film. However, there are a few differences between this film and Ocean’s Eleven. First, they can only get 8 members for this heist team, and second, the actors in Ladrón Que Roba a Ladrón speak Spanish. That’s really about it.

All of the usual characters needed for a good heist is here to play their specific roles. You have the “brains” of the operation in the form of the main two thieves, Emilio and Alejandro. Then, you have a tomboyish female mechanic, a valet, a nanny, a Cuban refugee actor, a muscle-head construction worker and the always in demand electronics expert to round out this crew. We really only need an acrobat to complete things. All of the characters in Ladrón are played mostly by telenovela actors, and they all pretty much have that handsome/smarmy look of soap-opera stars. Americans will recognize one American actress, Julie Gonzalo (Veronica Mars), who is actually from Argentina, but other that hardcore Spanish soap-opera watchers will recognize the cast. That’s not a bad thing as all of the actors do a good job in their respective roles. Certainly not the worst cast assembled ever.

The main twist for this movie is, of course, the language. It is aimed at the Spanish-speaking U.S. audience. The entire movie is in Spanish, but there are English subtitles available for non-Spanish speakers. That means you do have to pay extra close attention to the screen, while watching the movie, but reading the entire movie is not as bad as it sounds. The movie flows along well enough that you might even forget you can’t understand what they are actually saying. There is another twist in that there is a slight commentary on contemporary Latino immigrant life. Emilio and Alejandro decide to recruit real day-laborers because they say that “they are America’s invisible underclass”. Americans often overlook all of the Latino laborers that park their cars, wash their dishes, or mow their lawns says this film. That commentary is a little misguided, though, and not true for the majority of Americans. But this film is really not trying to make a political statement. There is too much fun here to worry about something that serious. Still the observations are interesting and they are in Ladrón.

But the film is completely predictable. This Spanish version of Ocean’s Eleven follows the classic formula of Robin Hood as they steal from the rich to give to the poor. While it may not be totally original, Ladrón is still entertaining even if you don’t speak Spanish. The characters may not be as cool as Danny Ocean and his crew, but Ladrón does have one thing going for it. There is an interesting mixture of “American-style Hollywood” cinematography with a largely “Latino vibe” surrounding everything in this film. In the end it pales in comparison to the movie it makes no secret of copying, but at least it doesn’t take itself too seriously to believe that it’s better than Ocean’s Eleven, which is more than you can say about a lot of films out there.

The video is given in 1.85:1 anamorphic widescreen color, which is enhanced for 16:9 TVs. There are no major issues here. Pretty much what you would expect from a new DVD release.

Audio Commentary
There is a full-length commentary with director Joe Menendez and JoJo Henrickson (writer/actor). They do the entire commentary in English, since JoJo can’t speak Spanish at all. Interesting since he actually wrote the film and he is in the film as well. This commentary is a good mix between being entertaining and informative actually.

“Making of Ladrón Que Roba a Ladrón” Featurette
This featurette runs 13 minutes and it’s the basic stuff you would expect. We hear from the cast and crew, in both Spanish and English, as they talk about the film. Everything you want to know about the film is here basically.

“Making of the Score with Andres Levin” Featurette
This is a short three-minute featurette on the music used in the film. The composer of the film, Andres Levin, doesn’t really say much about it, but there are various shots of him behind-the-scenes putting the music together and it being performed. It is what it is.

Deleted Scenes
There are 24 scenes here that runs 22 minutes total. There is optional commentary from Mendendez and Hendrickson about why these scenes were cut. But basically they were all cut for time reasons. Still nothing too major that you will miss if you don’t watch them.

Don’t expect it to be the next “big” movie in the heist genre of films. It’s entertaining enough for a rental, if you don’t mind reading subtitles. But I wouldn’t go as far as recommending a purchase unless you are a super fan of any of the Latin-American actors involved in the film. Still there are worse imitations of Ocean’s Eleven out there.