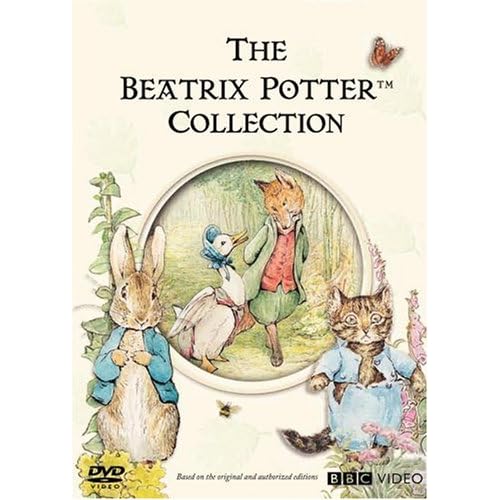 Beatrix Potter created a whole world of cute little animals wearing clothes that have been enjoyed by children all over the world for years. Between the years 1992-1995 BBC produced a series of cartoons based on her timeless tails.

There are nine 22 minute cartoons here that are beautifully animated. They really bring Potter’s style to life. However, despite the beauty, not all of them work. They vary from very good to just bland. The worst being The Tale Of Pigling Bland – the story just isn’t that interesting. Also each of the episodes is bookended by short live action scenes of Beatrix Potter (Cusack) working on the stories in her little shack talking a rabbit that is sitting on her desk. None of these is very good and makes the cartoons look really great by comparison.

Most the stories revolve around either Mr. McGregor trying to catch the rabbits to bake them in a pie, or the Fox or the Badger trying to eat the lead of the tale. In fact the eating of the main character is a part of most of the plots here and occasionally the cartoons take a dark turn that might upset some kids.

These aren’t bad cartoons but they are definitely geared towards children and will be enjoyed by them far more than adults. However they aren’t so terrible that a parent couldn’t sit down and watch these with their child. However, and this is only a suggestion, if you want to spend some really quality time with your kids, pick up the books instead of the DVDs and read them aloud.

The Tale Of Peter Rabbit And Benjamin Bunny

The Tale Of The Flopsy Bunnies And Mrs. Tittlemouse

After gorging themselves on the rubbish heap in Mr. McGregor’s garden they all fall asleep and are captured by the crotchety old man. It’s up to their father, Benjamin, and Mrs. Tittlemouse to save them. Also, Mrs. Tittlemouse has a bee problem and only frog problem can help her.

The Tale Of Tom Kitten and Jemima Puddle-Duck

Moppet, Mittens and Tom Kitten attempt to stay clean as per their mother’s instructions but curious kittens just can’t keep out of trouble. Also, when Jemima Puddle-Duck decides she wants to hatch her eggs she leaves the farm to find a safe place to do this only to fall under the guile of the sly fox.

The Tale Of Mrs. Tiggy-Winkle And Mr. Jeremy Fisher

In this very odd cartoon a young girl loses a handkerchief and enlists the hedgehog Mrs. Tiggy-Winkle to help her. Either this girl is very tiny, or Mrs. Tiggy-Winkle is a huge hedgehog. Along their search they meet Mr. Jeremy Fisher, a frog who shares with them his fishing adventure.

The Tale Of Mr. Tod: The Further Adventures Of Peter Rabbit and Benjamin Bunny

In this rather disturbing cartoon seven little bunnies are kidnapped and it’s up to Peter and Benjamin to rescue them. Luckily Mr. Tod, the fox, gets into a nasty fight with his unwelcome guest, the badger.

The Tale Of Two Bad Mice and Johnny Town-Mouse

Two mice, Tom Thumb and Hunca Munca create havoc in the farm house where the decide to live in a doll house and are discovered by the humans. Also, Johnny Town-Mouse entertains a visitor from the country who was accidentally was carried inside in a vegetable basket.

The Tale Of Pigling Bland

Pigling Bland and his brother who appears to have ADHD go on adventure to the market. Along the way a cop arrests the ADHD brother and Pigling ends up staying with a man who treats him nice but secretly wants to turn him into bacon. Here he meets Pig-Wig who’s been imprisoned by the man for some time.

The Tale Of Samuel Whiskers Or The Roly Poly Pudding

Tom Kitten falls into the grasp of an evil rat, Samuel Whiskers who wants to turn him into a kitten dumpling. It’s up to the adult cats to find him and save him.

The Tailor Of Gloucester

In this, the most different story of the bunch, a tailor is making a coat for the Mayor when he falls ill and the little animals come together to finish the coat for the sick man.