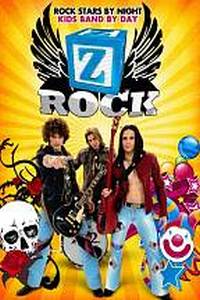 Spinal Tap. Tenacious D. Flight of The Conchords. These three bands all have two things in common: They are all very funny and they all really rock. Sadly, this show isn’t about any of them. This show is about ZO2 and try as they might they both fail to rock or be funny.

While the three previously mentioned comedic bands were Actor/Comedians turned musicians, ZO2 are musicians turned actors. Unable to make it as musicians they seem to be trying to worm their way into the industry through this show.

ZO2 is brothers Paulie Z and David Z and Joey Cassata. By night they play rock gigs; apparently they opened for KISS once. However, by day they pay the bills by playing kids parties as The Z Brothers. Shot like a documentary the show follows the band as they balance their day and night lives, however the show is most definitely scripted.

There are several problems with this show. To start the band cannot act, it is obvious this is not their first talent. Secondly the band can’t rock. There songs just aren’t interesting. The show somehow manages to get lots of cameos including but not limited to Sebastian Bach, Dave Navarro, Dee Snider and John Popper. But they are by no means enough to make the show worthwhile.

That’s not to say the show is all-bad, there are a few laughs, but most the time you sit there thinking you’d rather be watching any of the other bands mentioned in the first paragraph. They seem to pull ideas from all of them just not as good.

After a gig, Paulie and David have an all-nighter with some groupies. They oversleep the next morning and are late to a very important gig at a major record executive’s kids birthday party and it turns out one of them slept with the exec’s sister.

The guys show up for a kid’s party in Long Island, only to find out it’s been double-booked by their kiddie world nemesis Kidtastic!

The Z Brothers meet John Popper after playing at a bris. After some persuasion, Popper offers them a record deal, however it’s not exactly what they were expecting.

John Popper wants to show the guys how awesome being a full time kids band can be and books them for a $10,000 birthday party for Gilbert Gottfried’s son.

Neil, the owner of Southpaw, where ZO2 play regularly, can’t handle his feelings for Paulie and puts a stop to their regular gigs there. ZO2 gets a gig at Manhattan’s Cutting Room, but the crowd isn’t in to rock music and it takes some encouraging words from Joan Rivers to get them to finish the show.

The guys shoot their first music video under the direction of Dave Navarro who is just coming off a major adult movie shoot. However, the band has creative differences with Navarro to devastating results.

The band’s future is questionable when each guy takes his own path. Paulie pursues his solo career and meets Dee Snider, David tries modeling and Joey starts taking nursing classes.

The group finally gets a break opening for Joan Rivers. However, the temptation of the casinos puts the gig in jeopardy.

The boys don’t want to sell out and decide to reject John Poppers deal. When they realize Dina sacrificed a lot to make it happen they decide to accept the deal. However they then find out the major record executive wants to sign them after it’s too late.

After they begin working with John Popper, the guys realize they aren’t allowed to write their own music and want out of their contract. Popper lets them go giving them one last task: help him get revenge against the major record executive. Little do they know how much this might hurt them.

The show is presented in widescreen 1:78.1. Sound is in Dolby 5.1 surround. The show looks and sounds fine. Nothing to complain about here.

Behind The Mayhem: (12 min.) Making of stuff. Talks about how the band got the show after doing the rock band/kids band thing in real life. Interview with cast, guest stars and crew.

Advice From Joan Rivers: (2 min.) Joan gives Dina advice on how to deal with the band. Not funny.

Brooklyn Meets Hollywood: (2 min.) This is the band ad-libbing with the guest stars of the show. Not really funny,

Behind The Scenes: (2 min.) A shortened version of Behind The Mayhem. Not funny and totally pointless to boot.

If you want to see a funny TV show about a rock band watch Tenacious D or Flight of the Conchords, this isn’t half as good as either of those shows and I can’t really recommend it to anyone.