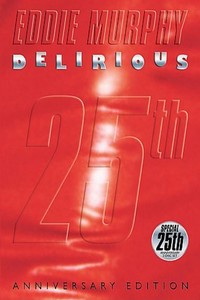 When you think of Eddie Murphy these days all that comes to mind are his bland uninspired kids films. However, if you’re old enough you remember when he made good movies; he made funny movies; he was on Saturday Night Live and one night in 1983 he took the stage in a red leather jump suit and made comic stand-up history.

Delirious starts out a little painfully with some very dated gay jokes. Some of it is funny, but a lot of is it just ignorant based on what we know now. But after the rocky start Eddie hits his stride and the laughs don’t let up. He tackles topical subjects of the time, talks about celebrities like Mr. T, James Brown and Michael Jackson. He does a few impersonations as well.

But the funniest stuff is the personal stuff. He talks about everything from kids going crazy when they hear the ice cream man, playing with G.I. Joes in the bathtub, and family picnics.

Just about every joke in this stand up is memorable and quotable and as much as I’d like to thrown down of my favorite here, however I’d have to edit them down so much they wouldn’t be funny. Accord to wikipedia he uses 230 F words and 171 S words in just over an hour. Now that is pretty impressive.

At one time Eddie Murphy was the king of comedy and this is a wonderful video document of that time.

The film is presented in 1.33:1 fullscreen and Mono sound. This is a pretty good-looking transfer. For 25th years old there really isn’t anything there to distract from the comedy. The sound is okay, there are parts where I had to rewind it a couple times to hear what the audience was shouting.

Making Of Delirious: (25 min.) Many comedians talk about how influential Delirious was for them. There is also an interview with Murphy himself reflecting on the performance.

Never before seen footage: (4 min.) These are two bits that are really funny. One is Eddie commenting on someone who shouted for him to do Buckwheat and the other his him going off on the difference between white people and black people cussing.

Full Eddie Murphy Interview: (34 min.) This is the full interview Eddie gave for the Making of bit. It’s a really good interview and worth watching the whole thing.

This is a truly classic stand up performance. If you like stand-up comedy odds are the comedian you enjoy was inspired by this performance. It’s laugh out loud hilarious and very very rewatchable. This is a must own for any comedy fan.