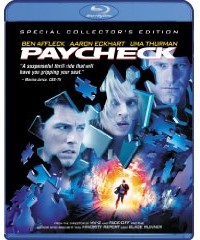 Philip K. Dick: a master writer of science fiction. John Woo: a master filmmaker of Hong Kong Action. Ben Affleck: an underrated actor that a lot of people hate for some reason, but I really like. It would seem like an easy assumption that the combination of these three good things would equal a good movie. But we all know what happens when one assumes.

Affleck plays Michael Jennings, a reverse engineer who takes other products and makes them better then has his memory erased afterwards with the help of his friend Shorty (Paul Giamatti). His old college buddy, James Rethrick (Aaron Eckhart), offers him a three-year job that will pay millions of dollars so he takes it. However after getting his memory wiped, he learns that he forfeited all his money and sent himself an envelope filled with 20 seemingly useless items.

Quickly he is wanted by the police and other men are trying to kill him and he no longer knows why. Soon he figures out that he sent himself these items to help figure out the mystery. A mystery which involves a machine that can see into the future and a woman that he doesn’t remember loving (Uma Thurman.). He ultimately meets up with her and with her help along with Shorty they begin to unravel the mystery.

As an action film, Paycheck is okay. Jennings is a really good fighter for an engineer and this is never fully explained. You see him training early on in the film then he’s kicking ass at the end, but he’s an engineer, so that’s kind of confusing. But it looks cool so it’s somewhat forgivable.

As an adaptation it’s pretty horrible. They got the memory wipe, the envelope of trinkets and the machine that sees into the future right, but beyond that the book and film couldn’t be more different. In fact, the entire point of the short story is completely lost in the film. The story was simplified to make a fun action movie which is a shame because it could have been a really good film and actually had something to say.

As a John Woo film it’s a pretty dismal outing. While it’s leagues and bounds better than MI: 2, it pales in comparison to his early work like Hard Boiled. However, he does manage to cram in his obligatory signature slow motion white dove. Too bad it makes no sense in the context of the scene.

As a film based on a Philip K. Dick story it’s floating in the middle. It’s way better than the likes of Minority Report but doesn’t hold a candle to Blade Runner or A Scanner Darkly.

The film was much more entertaining than originally envisioned, but it’s still a pretty bad film and it really falls apart at the end. Affleck and Thurman have surprisingly good chemistry together which is about the only thing that saves this film from being totally worthless. That and Paul Giamatti is really funny.

This film is presented in 2.35:1 anamorphic widescreen and 5.1 Dolby Digital Surround Sound. Say what you will about the film, but it looks really good, and on Blu-Ray it looks even better. Not the most impressive film I’ve seen on Blu-Ray but still really good.

Commentary with director John Woo: John Woo is actually a very interesting man to listen to and definitely has a strong understanding of film. He makes you want to like the film more than you do. He offers lots of interesting insight into the production and his thought process on why he did everything. I’d love to hear his commentary on a good film. (As a side note: It’s amusing to hear John Woo refer to Affleck as sexy.)

Commentary with writer Dean Georgaris: There really is no reason for any film to have more than one commentary unless one of them is a joke commentary. Georgaris does have some interesting things to say, but being made to sit through this film three times was just too much. It would have been much better if he and Woo could have done the commentary together.

Paycheck: Designing The Future: (18 min.) Pretty typical making of. Two interesting things of note. One: Woo originally wanted Matt Damon but he was busy. It was Damon who recommended Affleck. Two: Apparently the film is greatly inspired by Alfred Hitchcock. Sorry, I just don’t see it.

Tempting Fate: The Stunts Of Paycheck: (17 min.) You know what? The stunts in this film are pretty darn impressive. Too bad I didn’t notice until I saw this special feature. You don’t realize who much work goes into things like a motorcycle chase scene until they tell you. This is pretty interesting stuff.

Extended/Deleted Scenes: (12 min.) You get seven of these. Definitely file these under deleted for a reason. They add nothing to the movie.

I’d really heard nothing good about this film going in so I was more or less pleasantly surprised with what I saw. It’s not what one would call a good film and I’d be hard pressed to recommend it to anyone, but I enjoyed myself while watching. Affleck did a pretty good job, but I expect more from Woo.