I hope everyone else is enjoying their own Horror movie month like we do every year at my household. It’s really amazing how I get in the mood for these things every year, and to be honest, I’ve been a little depressed that more stores haven’t had those big displays of fright flicks we used to get around this time every year. Part of my fun every year used to be getting to pick out some stuff that I’d never seen before and usually get it for cheap. This year I went and looked and there was only a small rack of movies and half of those were Goosebumps movies.

Thankfully, I’m pretty stocked up in this department, and on top of my usual slate of Slasher and Giallo films I like to take in every year, I’ve expanded my lineup for some awesome Monster movies. Plus I’ve got plenty of friends that were all too happy to add a wide array of their own additions to my marathon. One of those additions I’ll be talking about today, is a vampire movie from the 1980s that will probably end up as one of my favorite films of the whole subgenre.

I’d like to start off by saying that the more I see of Kathryn Bigelow’s work, the more she impresses me on almost every level. The Hurt Locker was shattering in just how good it was this past summer, really putting to shame a lot of the “blockbusters” it was up against during the same time period. Point Break doesn’t feature what I would call “good” performances, but it may feature some “ultimate” ones, as in we get perhaps the “ultimate” Keanu Reeves, Patrick Swayze, and Gary Busey in the movie. We also get some kickass stunts and one of the most memorable chase/shootouts ever. It’s been a long time since I’ve seen Strange Days, but I remember the movie absolutely delivering on every level when it needed to, coming through really well on an interesting Sci-Fi premise. Even K-19 is a little better than a lot of people give it credit for, as Harrison Ford and Liam Neeson square off nicely, and Bigelow gets the claustrophobia of the story down pretty nicely.

Then there’s Near Dark.

I’d always heard about the movie, but never gotten around to seeing it, despite the fact that the picture mostly consisted of actors that belonged in James Cameron flicks, including Bill Paxton, Lance Henriksen, Jenette Goldstein, and the ugly biker dude with the beard that Arnold beats the crap out of at the beginning of T2. I was just never able to get it off my “list of shame” until recently, and now I see what all the fuss is about.

Near Dark is a kick ass, action packed, and at times, terrifying movie, that shows that Bigelow is a director who knows exactly what she’s doing when she sets out to make a cult movie. Guys, if you’ve got a girlfriend who loves vampires and keeps going on and on about Twilight and how romantic they are, you’ve got three real options for a smash-mouth, ass kicking vampire comeback; a movie with the word Blade in the title and Wesley Snipes on the cover (preferably one of the first two), the last 40 minutes of From Dusk till Dawn, and then you’ve got this movie. While I’d recommend the Blade films if you’re looking for slick action movies with some of the best fight scenes ever, and the Rodriguez/Tarantino hybrid for Grindhouse-esque depravity, the best all-around movie may just be Bigelow’s Vampire/Western.

This movie is the anti-Twilight. Say you’re a cowboy. You’re a good looking guy and you’re in town for the night to get drunk and if you’re lucky, get some action while you’re at it. While you’re screwing around with your friends you spot this hot blonde in tight jeans, and after a little of your charm she even agrees to take a ride out in the country with you. Now, you figure it’s your lucky night, but this girl is pretty aloof and keeps talking about how awesome the night sky is. She also just spooked your horse, which is really peculiar, but she’s still really cute, so you let it all go.

Just before dawn, she’s freaking out about getting home, and you think it’s because her dad will be pissed she was out all night, but you still manage to get her to make out with you a little. But just when it’s getting good, she bites you, and then runs off before the sun comes up. You decide to write the whole thing off when your truck breaks down and you have to walk home, but there’s something definitely wrong that you start to notice when the sun comes up.

Turns out your skin is on fire.

This is the type of really odd night that unfortunately goes down for Caleb Colton (Adrian Pasdar of Heroes), and just when he thinks it can’t get any worse, he gets kidnapped by a group of leather clad psychos driving a blacked out Winnebago. It’s an awesomely simple beginning that Bigelow sets up with Near Dark. Sure, this all sounds familiar, but just when this movie could go the romantic route, with Caleb learning about his new powers and coming to grips with eternal youth, he gets hooked up with what are basically a group of serial killers, going town to town and feeding on those that fall into their trap. These aren’t your pretty, heroin-chic/sad-sack vamps (the first Blade), we’re talking about murderous outlaws who do look strung out, but the only drugs they need are blood and adrenalin. These guys aren’t looking for any kind of redemption or acceptance, they’ve got each other, and the only thing they need is to slit your throat. The best part is this too; you want Caleb to jump right in there with them because despite being psychopaths, they’re still pretty awesome.

I know there’s a tendency out there to call Bill Paxton a bad actor sometimes. Mind you, the guy likes playing for the cheap seats, but when he’s in full on blowhard mode (like in this flick or as Hudson in Aliens) there’s hardly anyone that’s better at what he does. Its Paxton alone that injects this movie with its humor, as his undead cowboy can’t help but crack-wise as he’s about to take another victim, yelling “bull’s-eye” after shooting an unlucky trucker between the eyes, or casually telling a little girl “we keep odd hours” after she inquired about their obvious nocturnal habits.

Paxton’s Severen is also the most sadistic of the bunch, taking slightly more pleasure out of his kills than anyone else in the group. The movie’s signature sequence has the gang enter an old rundown bar, hoping to get Caleb to commit his first kill, but when things go crazy, its Severne that steps up to silence any witnesses and does so with the most amount of glee. Paxton stalks his prey, antagonizing them by insulting them directly or by walking on top of the bar, his menace realized with the deadly jangle of his spurs.

A little more nuanced, but just as frightening is Lance Lance Henriksen as the group’s leader Jesse Hooker. What I really love about this role and performance is just how much Lance Henriksen is able to inhabit this character so fully. We get a few hints about his past (“I fought for the South…We lost.”), but more telling is his appearance; how ragtag he dresses, his hair ratty with a giant braided ponytail, his body looking as if he hasn’t eaten in weeks, and most telling is how his nails look like pieces of bone sticking out the end of his fingers. Henriksen apparently spent a ton of time coming up with this character and his back-story, but his physical appearance a testament to the time he put in developing his character. 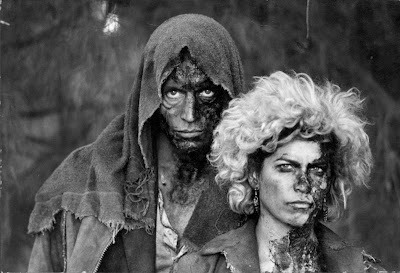 The rest of the group is not as fleshed out. I like Jenette Goldstein’s presence as the group matriarch, Diamondback, and the bond she has with Henrickson onscreen is pretty compelling, but other than some motherly touches here and there she doesn’t get as much to do. A little more interesting is Homer, played by Joshua John Miller. What makes this character so interesting is that while his physical appearance is that of a 12 year-old, underneath is a person older than anyone else in the group. His disposition is cranky, and his needs seem more pronounced than anyone else’s, but this raises a whole new discussion on how a child-like state and that of an elderly person can be very similar.

Unfortunately, the least interesting people in the picture may be Pasdar’s Caleb and his new vampire love, Mae (Jenny Wright), both coming off as the most clichéd members of the cast. Pasdar makes a decent clean-cut hero dealing with a new addiction, and Mae his starry-eyed companion, but neither are as memorable as the others above. Pasdar gets the better moments between the two, especially during the film’s climax, and also gets a nice moment when he realizes just how strong he really is, but Wright doesn’t get to be much more than a pretty face. The movie alludes to an odd relationship with Homer and Mae that has gone wrong, but the relationship isn’t quite delved into far enough.

Thankfully, Bigelow more than makes up for the shortcomings of the two leads with amazingly stylish direction. First of all, the woman knows her way around an action scene, especially the awesome shootout midway through when the gang is locked in a motel room, a squad of police officers trying to shoot their way in, with the growing sunlight more of a concern than any bullet fired at the outlaws. Aside from the action though, the movie has terrific atmosphere, with the director wisely emphasizing the family aspect of the movie, making them much more empathetic than you would ever guess it could. As much as they try to revel in it, these people are trapped in this world of darkness, and they deal with it by sticking together, and the small moments the movie brings of them playing cards and dealing with their own family dynamic adds a layer that comes totally unexpected.

Near Dark is the vampire movie for people that don’t necessarily like vampire movies. Usually depicted as either European nobility or out and out monsters, this movie presents the undead as something in the middle, lost souls that have to feed on the living in order for them to continue their endless night. These aren’t some unearthly creatures, but people that bring real fear. These aren’t your dad’s vampires, these are the bad ass bikers that scare the crap out of you at the end of the bar, but somehow still make you want to be one of them. If you’re tired of the endless Dracula retreads out there, Near Dark is the movie for you.