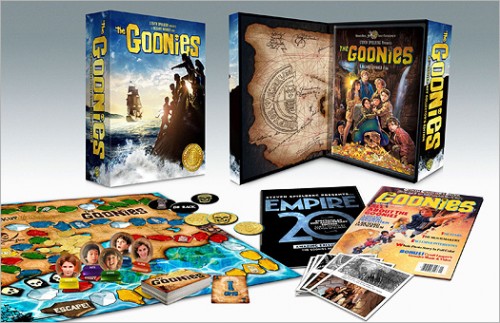 Twenty-five years ago today (June 7, 1985), The Goonies arrived in theaters. The movie was a staple of my ’80s childhood and it has remained one of my favorites well into adulthood. Back when family films were dominated by human actors and not CGI creations, The Goonies was the juvenile answer to Indiana Jones. But instead of seeking “fortune and glory,” the young explorers are trying to save their community from greedy land developers. Now the movie with booty traps, the “truffle shuffle,” and bad Spanish translations is getting a 25th anniversary commemorative release on November 2, 2010. On that day, Warner Home Video will release it on Blu-ray and as an Ultimate Collector’s Edition.

The Swag that will come with the UCE box includes a “Goonies” board game, collectible storyboard prints, a 1985 souvenir magazine and a 2009 Empire Magazine article on the cast and Richard Donner and Steven Spielberg, who directed and produced the cult classic, respectively.

Unfortunately, I get the feeling that little in the way of new bonus material will be added to this 25th anniversary edition. Because the only bonus features announced are deleted scenes, a “Making of” documentary, commentary from Donner and the entire cast, and the Cyndi Lauper music video, “The Goonies ‘R Good Enough.”

Frankly, these features ‘R (Not) Good Enough, since they are all carried over from the original DVD release. So unless the “Making of” expands on the short, six-minute featurette already on the DVD, then this is another example of Warner Home Video dropping the ball, like the studio did with its so-called “Deluxe Edition” of Poltergeist from a few years back. Also celebrating its 25th anniversary then, the only extra on the release was a half-hour featurette. The featurette was not on the production or included comments from the cast and crew. It was a short documentary about real-life spook experts. Lame.

When the extras are finalized we’ll let you know.