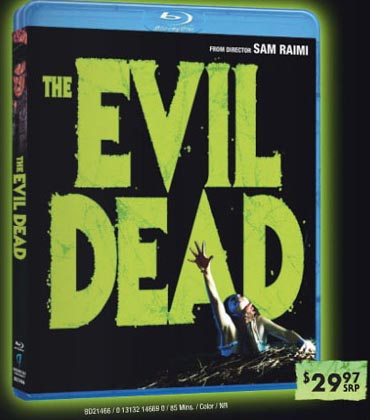 Anchor Bay Home Entertainment will release The Evil Dead for Blu-ray on August 31st. Besides sporting a new high-definition transfer personally supervised by director Sam Raimi, the seminal horror classic will include a brand-new commentary track by Raimi, producer Robert Tapert and star Bruce Campbell. Also on board for the Blu-ray release is behind-the-scenes footage, outtakes, talent bios, an art gallery and more.

First released in 1981, The Evil Dead introduced the world to both Bruce Campbell and Sam Raimi, two figures that would go on to dominate the world of cult horror for the next thirty years. The story of a group of college students who traipse through the woods only to disturb and awaken an evil primordial spirit, Evil Dead is a genuine cultural phenomenon — inspiring two sequels, a slew of merchandise and even a musical!

If the high-definition transfer being released on Blu-ray this August is the same one that is currently traveling the country in a theatrical revival of the film, fans are in for a treat. I caught Evil Dead on the big screen a few months back and it looked amazing — better than ever. Sam Raimi’s Evil Dead films are notorious for the multiple releases the films have seen over the years on DVD but this Blu-ray release of the film should prove to be worth dipping double (or triple or quadruple, as the case may be).