Every day Robert Saucedo shines a spotlight on a movie either so bad it’s good or just downright terrible. Today: Let’s go Bolling! 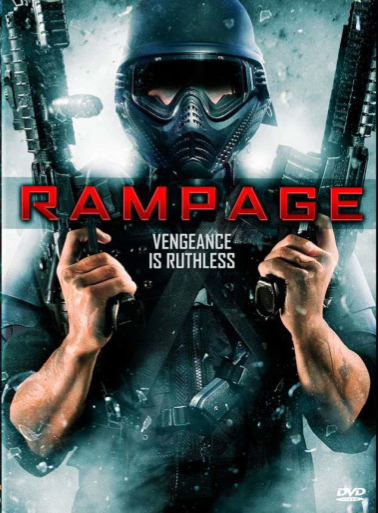 Boll, no stranger to criticism, wrote and directed Rampage, a sociopathic bloodbath that plays like a mixture of Falling Down, Elephant and Grand Theft Auto — as seen through the eyes of an angsty teenager who consists solely on a diet of energy drinks, heavy metal music and a complete lack of hugs.

Brendan Fletcher stars as Bill, an emotionally distant young adult drifting through life seemingly without a direction. His days are spent either sulking in his parent’s basement, where he alternates between reading and wailing on his punching bag, or working at a local garage.

Bill’s only friend is Evan, a would-be political activist who is all bite and no bark, and his parents want him to move out of their house. To top it all off, Bill can’t get a decent cup of coffee to save his life. Sure he has his problems but it’s not exactly like Bill’s living a tumultuous life or anything.

Regardless, Bill is pissed off and he decides to do something about it — namely putting together a full-body suit of Kevlar armor, arming himself with a pair of guns and going on a good ol’ fashioned killing spree.

The film’s marketing campaign tries to sell the film as a revenge thriller and claim that Bill’s killing spree is somehow about vengeance. Vengeance for what? The closest thing Bill is given as a motive for doing what he does is that people are kinda mean to him. So freakin’ what? If somebody cuts me off in traffic, I’m justified in blowing his brains out?

Rampage is exactly the type of film that would never have gotten released in the late ‘90s, when school shootings were seemingly happening every other week. How quickly we forget.

Bill’s titular rampage consists of him blowing up the police station, mowing down dozens of innocent bystanders and, worse of all, getting away with it.

Trust me when I say I’m not one to come down on the side of censorship and I’ve never been somebody who crusades against free speech but even I found my limits tested while watching Rampage, a film with a truly questionable message.

Fletcher, long a familiar face among Canadian-shot B-movies, gets his chance to shine as a mass-murdering monster. Between making his best sexy eyes in front of a web camera between spouting off Nazi-esque slogans and trying his best to pull off the type of nuanced nuttiness of Brad Pitt’s work in 12 Monkeys, Fletcher comes close to succeeding in humanizing his character. Unfortunately, Boll’s script does not give him much to work with.

The first half of the movie consists of Bill wandering through his not-so-bad life listlessly interacting with his friends and family. Brief flashes to the carnage to come break up what could otherwise be confused with a slice-of-life drama.

By the time the massacre begins, though, the film has devolved into a derivative cartoon, offering up no more human emotion or depth than a shoot ‘em up first-person-shooter video game.

Boll has put me in a real awkward position with Rampage. I hate to be the voice of the indignant audience member shocked into a stupor but I just couldn’t get over how inappropriate of a film Rampage was. The senseless violence, mixed message and lack of a hero whom audiences could root for left the film feeling like a ship without a rudder — aimlessly meandering through the waters of sensationalized controversy for controversy’s sake.

It’s one thing to make a movie that outrages the audience but gets them thinking about a deeper, important meaning. Boll, it seems, has made a movie that shocks audiences just to shock them. Quick-cut editing, a throbbing rock soundtrack and some very loose skirting around arm-chair philosophy leaves Rampage looking like a student film from a burgeoning serial killer. 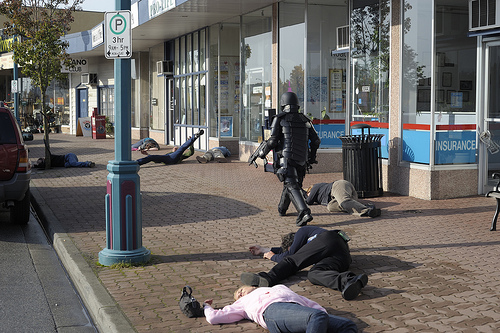 Having seen more then a few of Boll’s films in the last few years, I’ve long since decided he is not a filmmaker worthy of quick dismissal. There is definitely something going on up in his head — which is more than could be said about most of the “bad” directors still working in Hollywood today.

Rampage is not a bad movie, technically. Morally, it’s reprehensible. I’m sure it will find appreciation and admiration from the same audience that made Faces of Death and its ilk such an underground hit.

I won’t go as far as to say I hated Rampage, but I will say this: I sure wish I had seen a movie called Rampage about giant monkeys and giant lizards attacking buildings instead of the Rampage I did see.

Robert Saucedo was tickled by the fact that the DVD cover for Rampage makes it look like Bill’s massacre is set amid helicopters and skyscrapers. I guess New York is a better setting for terrorism than the small suburban community the film takes place in. Follow Robert on Twitter @robsaucedo2500.