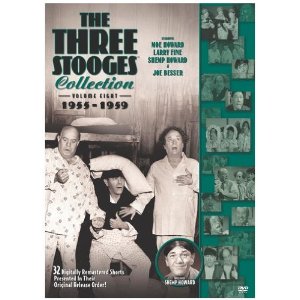 Mistakes can be corrected. When The Three Stooges shorts were originally released on DVD, the studio put them out in haphazard collections. They’d allegedly come up with a theme and put six or less shorts on a disc for a premium price. Even with a dozen plus releases, they weren’t even close to a majority of the library. The quality of the transfers went from restored to EP speed VHS tapes. It was a mess. Things got even worse three years ago when some genius in marketing figured Stooge-aholics would buy four shorts if they included colorized and black and white versions. Fans felt more abused by the studio than Curly, Moe, Larry and Shemp ever dished out. But then a mysterious genius at the studio released all the shorts in chronological order with packed discs at a reasonable price. Fans were grateful, but also fearful that the studio would poke them in the eyes and stall out the project during the Shemp era. The Three Stooges Collection – Volume 8 – 1955-1959 fulfills the promise that all 190 Stooges shorts would finally be available for fans disgusted by TV edits.

The final sixteen shorts featuring Shemp Howard are noted for him not really being in the last four. Shemp died of a massive heart attack after making “For Crimin’ Out Loud.” The Stooges owed the studio four more films for the year. Larry and Moe ended up resurrecting Shemp by filming new scenes that could be mixed with old Shemp moments. When necessary, they’d have a Fake Shemp in the new footage. You’d notice them when Shemp has his back to the camera or his face is disguised. The studio had no problem with this solution since it allowed them to save a bundle on production. Years later this technique would be used to create Bruce Lee’s Game of Death.

Moe and Larry couldn’t go on faking Shemp so they added a new third to the trio. Joe Besser’s time with the Stooges has been neglected over the last few decades. I’ve never seen them shown on AMC and Spike. Besser was kept off the compilation DVDs, It’s like evil force is scrubbing away his legacy like Van Halen does Gary Cherone. Besser altered the slapstick tone. His contract stipulated that Larry and Moe couldn’t slap him. He could hit them because it was part of his annoying brat character. He’d still get bonked with light objects so it wasn’t a non-violent Stooge era. But the full force mayhem abated on the screen.

My main memory of Besser shorts was they seemed to be about him discovering his sister being reincarnated as a horse. Turns out both “Hoofs and Goofs” and “Horsing Around” do have that plot. She’s a talking horse so it’s a precursor to Mister Ed. “Muscle Up a Little Closer” is startling since Moe and Larry have their hair combed back. It’s almost like they’re being more dramatic. “Flying Saucer Daffy” has them involved with flying saucers while “Space Ship Sappy” sends them to the moon. Their final episode together is the required matador moment in “Sappy Bullfighters.” He mixed it up well with Larry and Moe over their 16 entries. He wasn’t the original Gary Cherone.

While the shorts on The Three Stooges Collection – Volume 8 – 1955-1959 aren’t the greatest of the 190, they are still hilarious. Spotting the fake Shemps makes a fine drinking game. Joe Besser doesn’t take it, but he dishes out a little pain. There’s a major sense of relief that the studio didn’t attempt to split this final entry in half. Younger fans might ignore a Joe Besser set simply because they have no memory of him. Now they no longer need to make that harsh choice. Ultimately the pleasure of this set is having a complete collection of The Three Stooges in the house. It’s like an anti-First Aid Kit.

The Shorts
With Shemp: “Fling in the Ring,” “Of Cash and Hash,” “Gypped in the Penthouse,” “Bedlam in Paradise,” “Stone Age Romeos,” “Wham-Bam-Slam!,” “Hot Ice,” “Blunder Boys,” “Husbands Beware,” “Creeps,” “Flagpole Jitters,” “For Crimin’ Out Loud,” “Rumpus in the Harem,” “Hot Stuff,” “Scheming Schemers” and “Commotion on the Ocean.”

The video is 1.85:1 anamorphic. The transfers allow you to enjoy the detail in all the slapstick action. The pies pop when they hit people in the face. The audio is Dolby Digital Mono. The sound levels let you wince at the violence.

The Three Stooges Collection – Volume 8 – 1955-1959 is a reason to rejoice as a dream is fulfilled. It’s all here. Now you can have all 190 Three Stooges shorts in your house. The final entries of Shemp and Joe Besser’s tenure are captured on the boxset. Enjoy what has unfortunately become a neglected era of Stoogemania.