The Girl with the Dragon Tattoo – DVD Review 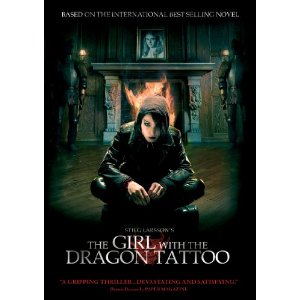 It took a few years, but it seems that the book that was a hit in Sweden has become a worldwide sensation. For the record, The Girl with the Dragon Tattoo has no wizards, vampires or lycanthropes. What it does have is the most fascinating character to grace mystery literature in quite a while. Her name is Lisbeth Salander. She is the titular heroine in this tightly plotted and sometimes violent whodunit in what is the first of a trilogy of mysteries from Stieg Larsson.

The mystery opens on journalist Mikael Blomkvist (Michael Nyqvist) being found guilty in a libel suit against Swedish industrial magnate Hans-Erik Wennerström. After the verdict – and to his surprise – Mikael is courted by wealthy patriarch Henrik Vanger (Sven-Bertil Taube) to investigate the disappearance of a teenage girl. The girl was Vanger’s niece, Harriet, and she’s been missing for over forty years. Disgraced and jobless Mikael takes on the case, which has him relocate to the small island where the disappearance occurred. Tracing his movements is Lisbeth (Noomi Rapace), the investigator who was assigned to do a background check on Mikael on behalf of the Vanger family. Lisbeth is a polarizing character; her standoffish behavior and Goth-inspired attire make her invisible to those who dare look in her general direction. Twenty-four and underdeveloped in areas that men like to ogle, Lisbeth is a basket case of emotions. Working alone on the case, Mikael is good. But when Lisbeth offers assistance, the case takes a dramatic turn. Per his urging, the two work together, weeding through old photographs and documents. Untrusting of others, Lisbeth finds herself growing to trust Mikael, but soon that trust is put to the test as they inch closer to a possible serial murderer.

Watching the film at this year’s South by Southwest Film Festival, only to read the novel afterwards, the writing team of Nikolaj Arcel and Rasmus Heisterberg has to be commended for condensing Larsson’s 590-page work (if going by the U.S. softcover release) into an investigative mystery masterwork. A labyrinth maze of names, faces, and theories, Dragon Tattoo‘s narrative bobs and weaves all over the Swedish landscape. Commanded by director Niels Arden Oplev, the film is a weighty procedural, and he measures each scene so as to let the viewer survey the situation along with Mikael and Lisbeth.

At 150 minutes it never feels too long. Had Arcel and Heisterberg taken no liberties with Larrson’s novel, the film could have been a six-hour mini-series. Side plots are omitted, as is the novel’s rather lengthy epilogue once the mystery is solved, and much of the confusion that comes from reading about the Vanger family tree is simplified for viewers. What remains is an engrossing mystery about ritual murders while examining the sexual violation of women. (Prior to having a name change The Girl with the Dragon Tattoo was called Men Who Hate Women.) The scenes involving Lisbeth and her state-appointed guardian will have you grimacing, but the payoff will leave you jubilant. It doesn’t make the film any less easy to watch, but it helps to process a character like Lisbeth, whose past discretions are tied to those that take advantage of women.

When the story moves into “sleuthing mode” Dragon Tattoo becomes a riveting motion picture. With each photograph or illegal hack, the evidence compounds and we sit excitedly, like we were reading a page-turner. Supporting the evidence is Oplev’s photography of the Swedish isle that holds the secrets of a mystery that’s been colder than the evocative landscape he projects. Not daunted are the bewitching pair of Nyqvist and Rapace; their characters form a bond built on mutual respect without forcing the issue. And the respect they glean from one another is of vital importance once the dynamic investigative duo is targeted for murder.

The film interpretation of Steig Larsson’s international bestseller isn’t just one of the best investigative procedurals to come down the pike, it is one of the best films of 2010. The Girl with the Dragon Tattoo even captivated the likes of producer mogul Scott Rudin (No Country for Old Men), who secluded himself for a week so he could devour the novel. Rudin is currently developing a Hollywood adaptation with David Fincher, a director who is no stranger to thrillers (Seven, Zodiac). While it is the first in a trilogy, the film does not end in a cliffhanger. The Girl with the Dragon Tattoo establishes the tone to expect in the second and third entries as well as the quality of the characters, which is the life jacket of any great mystery.

The Girl with the Dragon Tattoo is presented in 2.35:1 anamorphic widescreen and the sound is Dolby Digital. The language is Swedish with English subtitles, or you can listen to a dubbed English version. Unfortunately, the copy I received is a watermarked screener disc, so an accurate write-up of the disc’s visual and audio quality cannot be accomplished. Should we get a street copy of the release, we will include an update of the A/V quality.

This screeener disc did not come with bonus features, but the finalized version is slated to include interviews with Noomi Rapace and director Niels Arden Oplev, and a featurette titled “The Vanger Family Tree.”

Upon watching The Girl with the Dragon Tattoo at SXSW, the film quickly skyrocketed to sit atop my list of the best movies I’ve seen this year. Watching it again on DVD has only helped to reinforce its greatness. Superbly acted and with intricate plotting, the film has an arresting tone that casts a great shadow over the mystery that is unfurled. Forget the Harry Potter and Twilight nonsense and watch Noomi Rapace’s screen presence as Lisbeth, a heroine who doesn’t use a magic wand or glitter sticks to put you in a trance.