I can’t remember the last time I saw an animated series get as much hype as Avengers: Earth’s Mightiest Heroes.  For the past six months, I’ve seen trailers, commercials, huge billboards, not to mention the 20 short lead-in episodes to the series.  But, let’s face it, hype does not equal quality or success.

Thankfully, the two part premiere went a long way towards showing that this show will live up to all the hype.

One of the things I really liked was how the show started directly with action.  The simultaneous break outs at the Vault, Cube, Big House, and Raft provided a great framework to see all the heroes in action.   There still managed to be a lot of characterization slipped in, like the reoccurring themes in the shorts of Iron Man not being able to do it all by himself, Hulk trying to prove himself a hero, and where Thor’s responsibilities lie, but these things were framed perfectly by the break out story.

It was also great seeing the team all come together to take on Graviton.   Amazing that one supervillain fight can encompass a whole episode of a cartoon, and they still managed to keep it interesting.

There were a lot of great teamwork moments.  Hulk and Wasp working together was one of the coolest things I’ve ever seen in the cartoon.  Come to think about it, Wasp kicked some serious ass through the entire cartoon.  She rescues Pym from the Big House, pummels Graviton after he practically kills Thor, and then comes to the rescue of Hulk.

Also, some of the small details were great.  Leonard Samson getting hit by gamma radiation. The SHIELD agents were all characters we have seen in the comics like Jimmy Woo and Clay Quartermain.  And we saw a ton of Marvel villains both popular and unknown during the break out.  Mandrill?  Really?  Plus, there were even clever things going in the background.  My favorite was during of one of Thor’s early scenes with a woman stuck in a car struggling with the seatbelt and her airbag going off. 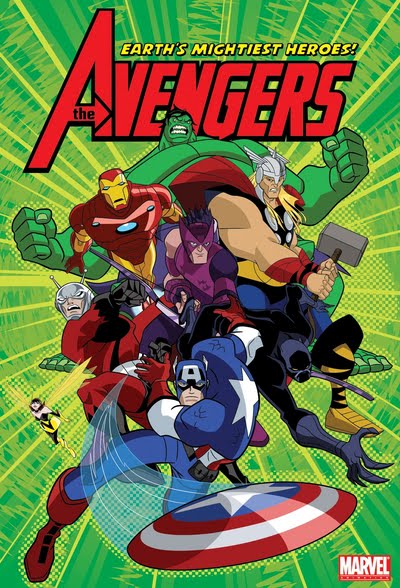 It was also smart just to introduce the core of the team.  From all the pictures, we know Captain America, Black Panther, and Hawkeye will all be part of the team, and the shorts did a nice job setting up their stories (plus Hawkeye’s brief cameo saving Iron Man’s life in the Vault), but adding them to these two episodes would have been more of a distraction than anything else.

It wasn’t all perfect though. There were two problems I had with the show.  The theme song is just about the worst thing I’ve ever heard from an action cartoon.  It doesn’t get me hyped up for the show, it makes me wonder where they found these emo freaks. I originally said Coldplay wannabes, but apparently people found that insulting.

And I was a bit worried by the Avengers’ apparent lack of concern about the safety of bystanders.  When Thor hit Graviton with a massive lightning strike, it looked like Thor left a path of destruction through like 25 city blocks in NEW YORK CITY!  When they showed the pull back view, it looked like everything on Manhattan south of Tribeca had been leveled.

I can see the headlines now, “Graviton Defeated…Millions Dead!”  I assume it was just the animators confused by the size of New York City, but it still looked horrifying!

Not to mention Iron Man’s efforts to contain the prisoners in the Vault…by making it self-destruct with all the villains still in there. Including Hawkeye who just saved his life. You would think he could have offered Clint a ride out or something! Is this is Avengers X-TREME!! Or just some amusing oversights? Safe to assume it’s the latter.

But these are just minor gripes.   I really did love this cartoon and can’t wait to see how the story plays out.  My money is on Loki being behind the break outs. Also, I really wanna know what SHIELD’s agenda really is. I am not typically a fan of “EVIL SHIELD” but they set some interesting ideas in motion with this show.

Verdict: Definitely worth checking out!