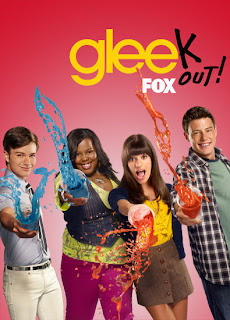 Last night’s episode of Glee was almost entirely good, and that’s good enough for me. What I really liked about the episode was how it struck a perfect balance of sad, sappy and silly. The episode continued to deal with the major storyline of bullying, and that was sad. Kurt’s dad and Finn’s mom got married, and that was sappy (in a good way). And Sue married herself, which was kind of weird but had fun, silly moments. All in all, it was an hour of TV that put a smile on my face and a tear in my eye.
Power in Numbers
Finally, this week, everyone really started to notice how serious Kurt’s situation was getting. As the glee kids said, they’d all been teased before – and I can see how a group of kids who routinely get slushies thrown in their faces might not have initially realized that Kurt was now experiencing a different level of bullying. But this week, everyone took a stand.
Will noticed the way Karofsky was terrorizing Kurt in the halls and intervened, taking him to Sue’s office. And Sue took things seriously, considering that, you know, she’s Sue Sylvester and refers to Kurt as “Lady”. But she was empathetic. She told him unless Karofsky laid hands on Kurt there wasn’t much she could do, but that she was sorry. And she gave him three new nicknames to choose from – Gelfling, Porcelain, or Tickle Me Dough Face. He wisely chose “porcelain”, which isn’t bad at all. The fact that Sue stood up for Kurt in this episode is a great example of the contradictory nature of her character. She’s a bully, yes. But she is kind to her sister. She is kind to Becky. She knows what it’s like to be made fun of for being different. So I could buy the fact that Sue would take Kurt’s side. 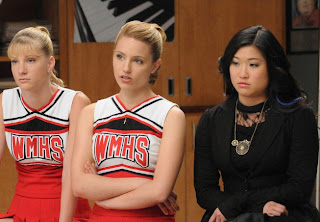 Meanwhile, Rachel assembled Brittany, Quinn and Tina for a meeting about Kurt’s situation. Since they all had boyfriends on the football team, she thought they could all convince their dudes to confront Karofsky and get him to lay off Kurt. Quinn (who’s always been one of my favorite characters) was the sole voice of reason, who pointed out that Rachel was suggesting fighting violence with violence. Someone should have informed Rachel that as a girl, she also has power. Of she confronted Karofsky, he probably wouldn’t have punched her in the face.
Finn wouldn’t go along with Rachel’s idea because he didn’t want to lose his already slipping popularity, but the other guys confronted Karofsky in the locker room. Karofsky threw Mike Chang into Artie’s wheelchair and then gave Sam a pretty bad black eye.
Furt
When Burt and Carol showed up at school to announce their engagement (Burt popped the question in the very classroom where Kurt had introduced them!), Finn was initially hesitant. You can’t really blame the kid, it’s a lot of change to deal with even if they were already all living together. Kurt immediately went into wedding planning mode, which was easy since he had a trunk full of wedding magazines stashed under the bed and already had the fall color palate worked out. Then when Kurt was teaching Burt and Finn to dance, Burt saw Karofsky making fun of Kurt. They all ended up in the office, and Finn finally realized things had been worse than he thought – he hadn’t known that Karofsky had threatened Kurt’s life. 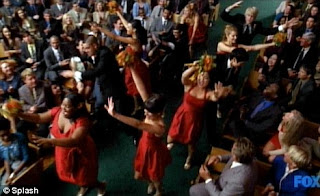 Sue expelled Karofsky, and everyone went off to enjoy their weddings. And there is nothing in the world that could be cuter than Burt and Carol’s wedding. All the New Directions kids danced (a slightly old but still awesome shout-out to that horrendous YouTube video) and sang, and the girls wore gorgeous red dresses. The vows were super touching. Then Finn gave the most moving speech ever (where he christened him and his new brother “Furt”…if all the pairings have to do that, then I know what Puck and Finn’s nickname is…) and danced with Kurt. And he sang a Bruno Mars song, which was just the best. This episode was definitely Finn’s best to date. The entire wedding scene was beautiful and touching and funny and perfect. Plus, Will sang a Michael Bublé song, which is exactly what he should be doing all the time. Schue’s had a good few weeks, if you ask me – I’d much rather see him do “Make ’em laugh” and “Sway” than, god forbid, rap again.
Mama Sylvester, Nazi Hunter

While I didn’t love the whole idea of Sue marrying herself, I did love the visit from her mom. I mean, can you get any better than Carol Burnett? No! You can’t! Sue’s mom had abandoned her kids to go chase Nazis, and Sue had never really forgiven her. I loved how Sue’s mom was even meaner than Sue, in a way. Their duet was fantastic, and the fact that afterward Carol Burnett said “That wasn’t as good as I thought it would be” was just perfect. And she wore white to the wedding. Hilarious. 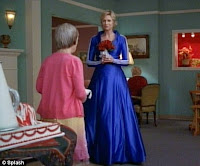 Still, though, the wedding was weird. I mean, it was almost worth it because Sue wore a track suit ballgown, and that was amazing. But still, it didn’t quite work. I mean, why was Sue doing this? Why now? Because an online dating site matched her up with herself? It just didn’t work for me, even though I do love any scene where Sue and Jean are together.
Transfer
Even though I saw the ending coming, it didn’t make it any less heartbreaking. The school board reversed Sue’s decision to expel Karofsky, which meant he’d be coming back to school to further terrorize Kurt. Sue resigned in protest and promised to have Porcelain’s back in the halls, but that wasn’t enough. Burt and Carol agreed to use their honeymoon money to pay for Kurt’s tuition at Dalton Academy.
I really felt choked up when Kurt announced the news to the rest of the glee club. He was crying, so you knew he didn’t want to leave his friends. He just had to. And obviously, Finn was upset. I have to give a shout-out to Amber Riley too, who conveyed such sadness with just the look on her face.
I don’t think Kurt will be at Dalton Academy forever, because that would be crazy, but he’ll be there for Sectionals. It should be interesting. Plus, I wonder what this will mean for his relationship with Blaine? Will they take their friendship to the next level, or will Kurt meet someone else?
I like what’s on the horizon for Glee. Quinn accepted Sam’s “proposal” and took his promise ring (it was sappy, but it was totally high school), and I think Santana is about to seriously mess with Rachel and Finn. Plus, I’m kind of liking Brittany and Artie together even though Tina is obviously jealous. Plus, next week is Sectionals! Personally, I can’t wait. (The video of the Dalton boys singing “Hey Soul Sister” is available online. My favorite part is when Rachel tells Kurt to smile from the audience.)
What did you think of the episode? Are you planning on booking a show choir for your wedding? Have you ordered your Adidas ballgown yet?
Here are some of my favorite moments and lines from the episode: