There were a lot of great comics and graphic novels that came out in 2010, but there were also a ton of books that I anticipated, but that never saw the light of day.  What follows is my annual look at the comics that didn’t come out:

#4 (Image):  Duncan Rouleau’s series about an inventor who has had his best ideas stolen from him is visually amazing, funny, and pretty interesting.  And hella late, considering this was a resolicitation (it was also on last year’s list).

Captain Swing #3 (Avatar):  Ah, Warren Ellis and Avatar.  I get the feeling sometimes like Avatar is the place he hangs out when he doesn’t have anything more pressing to do.  Captain Swing was a cool series from what I can remember, but it’s been so long since we’ve seen it, who really knows anymore?

Godland #34 (Image):  Godland is almost finished, but now I’m wondering just how long it will take to see these last few books…

Powers #7 (Icon/Marvel):  Powers is the poster child for late books.  I get it – Bendis is a pretty busy guy, but still…

urf is awesome, but it’s slow.  I don’t know if this is because the writer is a celebrity (in England – I’ve still never heard his name outside comics circles), or if the blame lies on Tommy Lee Edwards, but this title is LATE.

Joe the Barbarian #8 (Vertigo):  Usually when a book is really late, it’s natural to blame the artist, but Sean Murphy has put out two issues of a Hellblazer mini and a Teen Titans special in the time since the last issue of this comic came out, so I’m going to assume that Grant Morrison’s painted himself into a writerly corner on this comic…

Orc Stain #6 (Image):  Anyone whose read an issue of Orc Stain can believe it takes a while to draw.  This is one of the most visually complex comics on the stands.  I would love to see the next issue though…

Sullivan’s Sluggers OGN (Image):  It doesn’t surprise me that James Stokoe couldn’t get this graphic novel out on time considering he can’t keep up with Orc Stain.  Still, a graphic novel about a demonic baseball team seems like more of a summer read than a winter thing… mage):  It’s pretty much business as usual for Elephantmen to be behind.  The August issue just came out this week, so I imagine it will take a while for Starkings to catch up.

Invincible #77 (Image):  This title has been falling behind lately, but it’s also been better than ever, so I’m not going to complain too much.

The Secret History Book 14 (Archaia):  I’ll never understand the Archaia publication schedule; books get ignored for months and then become almost weekly, before another large gap between issues.  When it comes, it comes.

Wolfskin: Hundredth Dream #5 (Avatar): This book was surprisingly regular for a while, but has now completely dropped off my radar.  I don’t know if I care about reading the end of the story now; it’s too bad I preordered it.

Fear Agent #31 (Dark Horse):  Like Godland, this title is so close to its conclusion, yet it seems so far…

obe #3 (Image): This mini-series was meant to show what was happening on Earth while Invincible was off in space, but it’s publication schedule has been just as erratic as the parent title.

Meta 4 #5 (Image):  Ted McKeever has kept this oddball title pretty current, so we can forgive him for falling behind.  His crazy genius is timeless anyway…

Shuddertown #5 (Image):  Did this get canceled?  The hardcover has come out of the first four issues, so I don’t know what’s going on.

Sweets #4 (Image):  I’ve been enjoying Kody Chamberlain’s New Orleans detective comic.  I want to read more!  EDIT:  I just saw that this is coming out next week.  Cool.

I figure these two months are too recent to really complain about lateness, but there are still 7 comics from November I’m waiting for, and the same for December.

Last year I wrote the same type of column.  Any of those titles I’m still waiting for were canceled from Diamond’s lists, although not all of them have made their way back into publication.

Firebreather was resolicited as Firebreather Vol. 3: Holmgang, and the first issue has come out.  The next should be out in January.

Lucha Libre has disappeared, but may be getting published in a different form from Humanoids.

Guerillas has moved to Oni Press, and is being published as a series of graphic novels.  The first one reprinted comics I already have; I have no idea when I’ll get to read the rest of the story.

Doktor Sleepless has disappeared completely, which is too bad, because it was my favourite Warren Ellis comic, and it kept getting better.  I hope he finishes it up one day.

Does anyone know wha 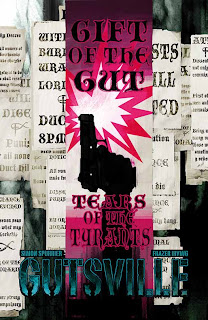 t’s going on with this stuff?

’76 was a pretty cool comic.  The fifth issue came out this year, but since then, nothing.  There are still three issues to go.

Infinite Horizon was spectacular, and there are still two issues left.  What’s the deal?

War Heroes was by Mark Millar and Tony Harris.  It was a little silly (and penile), but I can’t believe that there isn’t a market for this.

Pirates of Coney Island has one issue remaining.  Only one!  And it’s incredible.

Gutsville was the coolest comic Frazer Irving has ever done.  I’d rather see him finish this than relaunch Xombi.

Well, that’s my list for this year.  If anyone knows when we can expect any of these books, please write in.  So what’s on your list of books that never were?