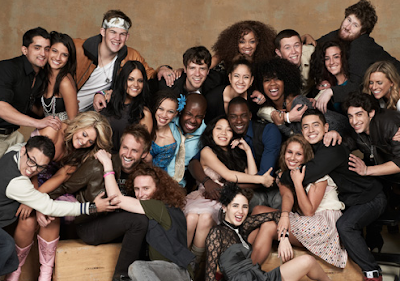 I wasn’t super impressed with the guys on American Idol last night (save for a few), so I was really hoping the ladies would bring it.

While some of the performers knocked my socks off, others practically made my ears bleed. The problem was, this episode basically served as confirmation that Steven and Jennifer are not cut out to be judges at this stage. Did they criticize anyone? There were a few truly brutal performances, yet they were still met with praise. Steven tells everyone they sang beautifully, Jennifer tells everyone they should be  proud. Randy is the sole voice of reason, though I guess I can take comfort in the fact that he’s stepped up to fill that role.

Did anyone else notice that these girls were much more…attractive than usual? Sure, there are usually a few pretty girls who make it through the first few weeks. But several of these girls are, I’d say, hot. Steven Tyler’s doing? An attempt to find a “complete package” artist?

Ta-Tynisa Wilson – Only Girl In The World
As I mentioned last night with regard to the controversial and mostly panned Jason Dorsey, I like seeing people come out and sing fun, upbeat, current songs. But it only works if you can pull it off, and Ta-Tynisa was WAY worse than Jason. I can’t believe Steven Tyler used his favorite word, “beautiful” to describe it, and Ta-Tynisa’s performance proved two things. One, that Stephen and Jennifer need to seriously toughen up and give real critiques, and two, thank GOD Randy has actually stepped up into the role of actual critic or else this show would be intolerable.

Naima Adedapo – Summertime
Naima should stick to singing. Her performance was outstanding, but that dress she designed? Leave that for actual fashion designers, sweetie. Truly, though, I thought she showed a lot of talent and potential.

Kendra Chantelle – Impossible
That can’t be her real name, right? It’s got to be the names of her first pet and the street she lives on. Other than a stripper name, Kendra has little going for her. She thinks she’s Mariah Carey but is more like a second tier Pussycat Doll.

Rachel Zevita – Criminal
Rachel is a quirky little thing, isn’t she? I saw her original audition, but nothing of her since. I wanted to like her, but it just wasn’t good. It was really bad. She wants to be a powerhouse singer, but she’s just not. The song was almost unrecognizable and the performance was out of tune camp. I think Simon has a couple quotes about cruise ships that would be appropriate in this situation.

Karen Rodriguez – Hero
It’s a questionable decision, to sing Mariah Carey on the Idol stage. I don’t know if Randy has ever mentioned it, but he’s worked with her a couple times. The dawg rarely likes a cover of one of his bestie’s songs. That said, she was OK. Karen has a nice voice and I appreciated her choice to sing some of the song in Spanish. But vocally, it felt beyond her range. The combination of the dress and the song choice felt a little Miss America talent competition to me, but I’d like to see what else she can do.

Lauren Turner – Seven Day Fool
Since I’m Canadian, my inferiority complex had a field day over the fact that Lauren sang a Jully Black song. Yeah yeah, Etta James did it first. But whatevs. Jully Black rocks. Anyway, Lauren was a welcome surprise halfway through the show – she’s fun, talented and has a lot of potential. One of my favorites of the night.

Ashthon Jones – Love All Over Me
I only know two Monica songs (three, I guess, if you count her duet with Brandy) and this wasn’t one of them. Ashthon is talented, but I thought her performance was rather generic and forgettable. If she wants to stand out in the competition, she needs to choose a more interesting song. The hair isn’t enough.

Julie Zorrilla – Breakaway
With the girly dress, the cheesy pop song (I love Kelly Clarkson, but without her vocal grit the song can be a bit wishy washy) and the lousy vocals, Julie’s performance brought back painful memories of teenage talent competitions. I could practically see a stage mom in the wings mouthing the words along and wishing she’d just stand up straight. It was cheesy, unoriginal and a pale comparison to the original.

Haley Reinhart – Fallen
I have to say, I hate when people cover “Fallen”. Although Alicia Keys is an amazing vocalist, it seems to be one of those songs that a lot of people can master when they can’t do anything else. Haley’s vocals sounded tentative and unsure, like it was her first time hitting the karaoke stage. Also? She moved around said stage like she was a bit drunk.

Thia Megia – Out Here On My Own
Wow. Now this kid? She can sing. The a cappella opening and stripped down arrangement was a bold choice for a fifteen year old kid’s first time on a big stage, and did it ever pay off. Not only did she show off her mad vocal skills, but she set herself apart from the pack with that talent. Plus, she’s all kinds of adorable. Girl could go far.

Lauren Alaina – Turn on the Radio
I was a big fan of Carrie Underwood on American Idol, and I’ve been a fan of her career ever since. Same goes for Kelly Clarkson (and I totally typed this before Randy said that…), and this girl is like a young, sassy mash-up of the two talented Idol alums. She has so much crossover appeal and personality, she picked the perfect song – I really can hear her on the radio. I can’t wait to see what other tricks Lauren has up her sleeve.

Pia Toscano – I’ll Stand By You
“I’ll Stand By You” is one of my favorite songs, and since I hadn’t seen anything from Pia before I was worried she wouldn’t do it justice. Was I ever wrong. She was another winner of the night, and is definitely one to watch.

This was a funny episode – the ladies seemed to be either quite good, or pretty terrible. Naima, both Laurens, Pia and Thia really impressed me. And I wouldn’t be opposed to seeing more from Karen and Ashthon. The others, frankly, are just fat waiting to be trimmed. What did you think? Who are your favorites?