What do you think of when someone says “Japan”? Well, from now on you’re going to think of archery, freezing cold water and mud wrestling, because that’s what the teams on The Amazing Race: Unfinished Business did during their stretch in Japan on last night’s episode.

Teams had to make their way from Australia to Japan, and it seemed everyone had to choose between the same two flights – a direct flight that landed at 6:15 a.m., or one with a connection that would arrive fifteen minutes earlier. You knew this wouldn’t end well, because otherwise we wouldn’t have seen each team debate their decision in such length. Come on, though, people! Fifteen minutes? That’s nothing! I definitely would have opted for the less-risky direct flight instead. Show me a flight that gets in an hour early and then we’ll talk.

I will say, I think the show spent too much time on the air travel drama. It seems like the kind of thing that turns lukewarm Amazing Race fans off the show, and it didn’t end up making too large a difference in the final results. The scene definitely could have been cut down a bit. Anyway, just as everyone had feared, the “earlier” flight was delayed in Hong Kong due to engine trouble, meaning Jamie & Cara, Kent & Vyxsin, Mel & Mike, Margie & Luke and Justin & Zev all arrived in Japan 90 minutes later than everyone else. That’s what you get for being greedy! (The most interesting part of the whole ordeal? The Globetrotters let their buddies Justin & Zev take the last seats on the earlier flight because they owed them a favor. Worst karma ever?)

Once in Japan, all the teams raced to a parking garage, that pretty much looked like a vending machine for cars. I think I heard Mallory ask “Are there chips in there?” All the teams had to drive to Yabusame Dojo for the Road Block, and that seemed to be pretty equalizing. Ron and Christina arrived first, despite getting directions from a local woman who Ron didn’t trust, saying “We might be screwed because of her ineptitude.”

The Road Block called for one team member to dress as a samurai, copy some traditional moves and then sit on a rotating artificial horse while shooting a target with a bow and arrow. Everyone else arrived at the Road Block as well, while the five teams who’d been on the delayed flight debated whether they should caravan to the next destination or, you know, actually compete. Margie & Luke and Mel & Mike split off from the group, while the goths sat in the car looking dazed and the redheads took down a guy’s side mirror trying to handle themselves in the hectic Japan traffic. Oops! Rather than taking money or settling the matter through insurance, the frustratingly silent man chose to call the cops, holding the reds up for an indeterminate amount of time.

Jen was the first to finish the Road Block – I liked Kisha and Jen back in their original season, and I can see them making it far (along with Justin & Zev) again. They’re physically strong, good thinkers and work well together. Plus they can be pretty funny, which is always a bonus. Gary also sped through the Road Block, because, you know, he’s Captain America. (Seriously, though – isn’t Gary all kinds of amazing for a dude who’s not 27 and a personal trainer?) In fact, everyone seemed to do pretty well except Ron. He’d been first to arrive, but his poor eyesight (and I’m guessing personality shortcomings) prevented him from doing as well as the others.

The teams sped off to the next clue, which asked them to choose between Prayer of Purity or Frog of Life. In the first Detour option, the teams would have to put on some more fancy Japanese duds, go through a spiritual ritual, and then stand under a freezing cold waterfall for a full minute. In Frog of Life, teams had to put on weird New Year’s Baby diaper outfits and search for a frog in a mud pit while locals pelted them with mud balls. Humiliation factor aside, the frog thing seemed like the easier option. Everyone went for it except two teams – Ron & Christina and the Globetrotters. 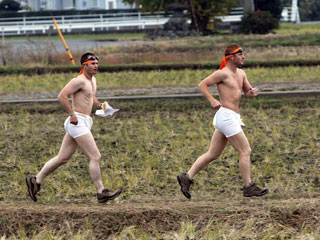 The first two teams to finish the Detour were both “Frog” teams – Justin & Zev pulled out yet another first place finish (despite being on the delayed flight!) and Gary & Mallory came in second. I loved how Mallory shouted that two redheads would be coming to do the challenge soon who would look really good in the outfit. Not only are Justin & Zev and Gary & Mallory two of the strongest teams, but they’re two of the funniest. 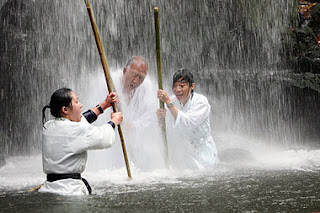 Over at the freezing cold waterfall, the Globetrotters handily finished the challenge first. I really like these guys – they always seem to be having fun, even when they’re being pelted with icy cold water. But they did make a mistake this week. One of them accidentally grabbed Christina’s fanny pack when they left the waterfall, not realizing until they got to the changing rooms that they’d actually left theirs with their clothes. Instead of returning it, they left it in the change room – not cool, boys. Christina, understandably, practically had a panic attack. When she and Ron arrived in fourth place she told Phil what was up, and he dinged the third-place Globetrotters with a thirty minute penalty. Meanwhile Kisha and Jen rocked the mud challenge and arrived at the pit stop, putting them in fourth place and knocking the Globetrotters back to fifth.

In the long run, I don’t think it’ll matter too much. The Globetrotters can’t be too far behind the other four teams, but I’m undecided on the penalty. It was an honest mistake, but the Globetrotters should have returned the fanny pack. On the other hand, if this penalty wasn’t in the rules prior to starting the race, it’s not really fair. What do you think? Was 30 minutes too much, or should the Globetrotters have gotten a bigger penalty?

Meanwhile, five teams still had to find frogs – and it was getting dark. Best moment of the night? Cord explaining how to sneak up on a frog and catch it, and Jet saying “The frogs weren’t alive. Did you know that?” Somehow, I don’t think he did. Despite their setbacks this week (these boys really seem to suck in cities – do they know how to ask for directions?) Team Cowboy meandered into sixth place. Next came Kent and Vyxsin (I loved Vyxsin’s little did at Kent, when she told him no, she wasn’t cold “because I was working really hard”) in seventh, and Margie and Luke in eighth. 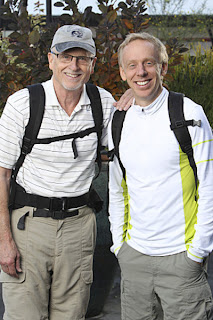 Throughout the whole episode, it seemed obvious that Jamie and Cara’s little accident would cost them the game. When they showed up at the mud pit, it seemed even they knew that. What they didn’t know was that the challenge had been very hard on Mike & Mel. So much so that poor Mike had to beg his dad to call it quits, since he was worrying about his dad’s health. As the redheads found their frog, Mike and Mel were still sitting in a car trying to warm up. Jamie and Cara made it into the pit stop in ninth place, and Mel and Mike were eliminated.

I would have liked to see Mike & Mel stay in the game since I think they’re so adorable (and I don’t care for the redheads) but I knew they wouldn’t be able to stick it out for too long. Really, I have mad respect for Mel – 70 years old is getting up there, so he should be proud of even giving it a shot. And did he ever give it a shot – he even told Mike “I’d rather die here with you than home in bed!” I think Mike made the right call in quitting the challenge. 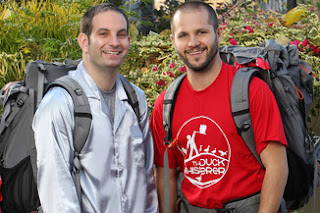 Based on these first three episodes, I think we have some clear front runners. I can easily see Justin & Zev, Gary & Mallory and Kisha & Jen in the final three, with maybe the Globetrotters or Magie & Luke challenging someone for one of those spots. But this is The Amazing Race, so you never know what could happen. What did you think of this week’s episode?