Even though I wasn’t the biggest fan of the actual original songs that Glee debuted in the Regionals episode on Tuesday night, I was blown away by the episode.

“Original Song” felt like Glee at its best. There was a strong focus on characters, their relationships, and their struggles. There were a couple of standout performances – I really liked the opening number “Misery”, and “Raise Your Glass” as well. And there was a lot of comedy – honestly, who didn’t laugh at the kids’ various attempts to write original music?

I’ve long wondered how Kurt is possibly handling the fact that Blaine sings the lead on every single song the Warblers do. The show had subtly addressed it before, when Kurt first started at Dalton Academy, and I feel like the slow burn of his jealousy was natural. Yeah, Kurt never liked the fact that he wasn’t getting solos. But put yourself in Kurt’s shoes – at first, wouldn’t you be willing to live as a glorified backup dancer in exchange for not getting intimidated and assaulted by a school bully every day? I would. But I knew eventually, as Kurt started to really settle in at Dalton, he would start to really long for the spotlight again.


Kurt’s anemic performance during “Misery” was fantastic. It was so completely unlike Kurt, and I instantly knew what he was thinking. He was right, he wasn’t part of the Warbler’s – he was part of Blaine and The Pips.

TVLine’s Michael Ausiello had teased that a minor male character’s death in this episode would change what happened at Regionals. And what a perfect example of why I should never, ever read spoilers. What a stupid scoop! The death was that of Pavarotti the bird, and poor Kurt was devastated. He sang a heartwrenching rendition of “Blackbird” in the bird’s honor, and that prompted Blaine to announce that he wanted to sing a duet with Kurt at Regionals. And what Blaine wants, Blaine gets.

Meanwhile, Rachel produced yet another incredibly literal and dorky song, this time about being an only child. The only Berry on the tree. Honestly, the comedy in this killed me. I know a lot of people have an unadulterated hatred for Lea Michele, but let’s face it – the girl knows how to play this character, and she can be really funny.

Quinn didn’t like what she was seeing as Finn helped Rachel try and come up with a decent song, so she tried to befriend Rachel to keep her close. They worked on a song together, and Quinn took the opportunity to tell Rachel to back off. I thought Dianna Agron was great here. What she said was cruel, but it was in many ways right. Rachel does not belong in Lima, Ohio, but Finn and Quinn probably aren’t making it out. You could call Quinn a bitch, but she’s not – if anything, I find her character kind of sad. She’s smart and very beautiful – I want her to see a better future for herself than married to Finn by age 21, working as a local real estate agent and having a few kids. It’s almost like Quinn was saying “Come on, just let me have this”. I want Quinn to have more, but unfortunately she can’t see that for herself yet.

Quinn and Finn do not really belong together, but neither do Finn and Rachel. Let’s face it – at some point these kids have to graduate, and Rachel deserves a scholarship to some great theater program. Finn won’t be able to follow her.

Though, speaking of Finn, I really liked his character in this episode. He went through a bit of an unlikable period (remember the kissing booth?) but the way he helped Rachel understand that she needed to dig deeper to write a real song felt like the old Finn.

Who had the best original song? Santana’s tribute to Sam (which was specifically orchestrated to show Brittany that she doesn’t love her, and is not a lesbian) called “Trouty Mouth” was all kinds of hilarious. I loved how the lyrics were so completely absurd, yet Santana sang it with more sex appeal than anything I’ve ever seen. But Puck’s tribute to Lauren, “Big Ass…Heart” was just so damn hilarious. It’s hard to decide. And I feel like Mercedes could actually have a future on ABC Family with her anthem “Hell To The No”, which cleverly rhymed “Wheaties” and “diabetes”, though I question the message it was delivering.

In the end, all the losers and Mr. Schu used the torment they’ve endured from Sue Sylvester to pen the tune “Loser Like Me”. The song is fine, and I think it would probably appeal to a demographic younger than myself. It was a little High School Musical esque, which is fine. And Rachel took all the hurt and sadness that Quinn brought out and channeled it into writing “Get It Right”. 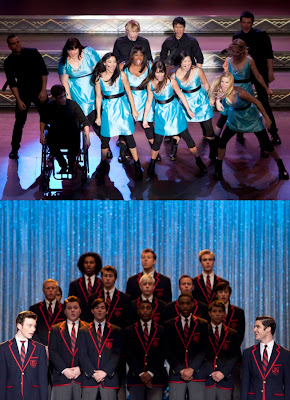 Obviously, New Directions had to win at Regionals. The story arc has to lead them to Nationals in New York at the end of the season, so there was never any fear that their original tunes would go unappreciated. The lack of suspense didn’t ruin the show, though – I liked how Regionals acted more as a backdrop to all the character development.

The Regionals performances themselves left me kind of cold. I didn’t know the song Kurt and Blaine performed, but I enjoyed “Raise Your Glass”. And while New Directions was fine, I definitely still prefer covers on Glee. Plus they lost points for their horrific outfits. Shiny blue bedazzled dresses with mid-calf leggings and combat boots? What? And this show really needs to stop trying to make ankle boots and dresses happen. That look is, like, so not fetch.

The scenes with the judges were short and sweet. Kathy Griffin was terrifyingly good as a Sarah Palin type Tea Party member, and Loretta Devine is good in everything – so she was extra good as a stripper turned nun. Their various problems with the glee clubs were great -especially because Sue had made Aural Intensity sing a song about Jesus. And any competition that ends with Sue punching out a judge is a good one in my book.

Rachel being awarded MVP (complete with a gold star trophy!) was perfect – such a great way to highlight her evolution as a character. She’s still the same old Rachel, but the group has learned to appreciate her in a way that they didn’t before.

Love and Other Plots

In other big news, Blaine and Kurt kissed! Twice! Wheeee! I actually thought they might drag out the Blaine/Kurt tension a little longer, since they were supposed to be like Harry and Sally. But I’m totally OK with them dating. Plus, that whole season was just absolute perfection. I hope this turns into a relationship that lasts a while. We’ve seen Kurt navigate coming out, and finding himself, and dealing with a bully. Now I’d like to see him navigate young love and his first real relationship. I’d like to see him be somewhat happy for a while, and I’d like to see someone else shoulder the emotionally heavy storylines. Santana has already taken over that role somewhat, and she proved she can handle it. Maybe we could see Mercedes get a really good storyline now.

Speaking of Kurt, will he ever come back to McKinley? I can’t see New Directions heading to Nationals in New York without him, but now that he got a solo with the Warblers and kissed Blaine, I can’t see him leaving Dalton either. At first, I thought Dalton Academy would be a short-lived endeavor. I didn’t think Glee could sustain giving attention to students at two different schools. But by highlighting both Kurt’s relationship with Blaine and his friendships with Mercedes and Rachel, the show made it work. Now I don’t know what will happen.

I thought there was a really nice moment this week when Brittany said to Sanatan “You’re still dating Sam?” There was so much sensitivity and emotion in her voice, you can tell that Brittany really cares about her friendship with Santana. I love where these characters have gone, and I’m really looking forward to those developments.

There was no Emma Pillsbury in this episode, but there was a phone call from Holly. Will Emma and Carl break up for good? Will she and Will ever be together? I honestly can’t see how that could work this season, but I want some good material for these characters before the season finale. I know the show’s strength is in the kids, but I like Will Schuester. I liked the stuff with him and Teri in season one, and I like what the show has done with him lately. In particular his friendship with Bieste. So should he get the girl?

As for Rachel, Finn and Quinn, I think this episode made it obvious that Finn and Rachel aren’t over, even though I don’t think they can be together forever. I don’t think Quinn will see her prom dream come true, but I love her character and I hope she finds herself in a different way.

We won’t know what’s going to happen with all these developments for a while, though – the show is on hiatus until April 12. (My 25th birthday is April 10, so yes, I’m considering the return of Glee a birthday present for myself.) What did you think of “Original Song”? What are you most excited to see happen in the rest of the season?

Now, check out my favorite lines & moments from the episode: