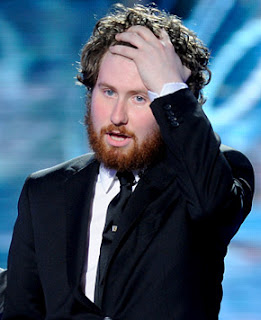 Wow – that was unexpected.

Although I hadn’t cared for Casey’s performance on Wednesday night, I thought other people would. What do you think it was? Did people share my opinion that Casey is becoming a bit of a one trick pony? I know I for one am getting a little tired of the angry hippie shtick, but I didn’t realize other people felt that way too.

And although I know I was one of the few people who really loved Stefano’s performance on Wednesday night, I didn’t think it would be enough to get him in the bottom three. I really thought this guy would have more of a fan base. He’s good looking and he’s got a fantastic voice, but the judges had to use a wild card spot to get him into the finals. Why hasn’t he connected with people? I think he’s so good!

I thought Thia would be eliminated tonight, even though I think she probably has one of the best voices in the competition. I’m surprised she’s not doing better, actually, because I think she’s one of the most marketable singers.

As soon as Thia was sent back to safety, I tweeted “Either Casey or Stefano??? This sucks, they’re both great. Judges save?” Luckily, I was right. I breathed a sigh of relief when my boy Stefano was declared to be safe, but I didn’t want to see Casey eliminated. I didn’t care for his performance this week but I think he has a lot more to give, and he definitely deserved to go on tour. The judges clearly also thought he had a lot more to show, because he only got a few lines of his song out before they cut him off and announced that they’d use the judges’ save.

Is that the closest someone has ever come to puking on the Idol stage before? It sure looked like he was going to throw up. What do you think, were the judges right to use the save so early? Do you think Casey can make a comeback, or does this signal that he lacks the fan base to get further in the competition?

As for the rest of the show, it was pretty good. I enjoyed seeing how Marc Anthony had helped all the contestants – he seems like a nice guy, even though I’m perpetually shocked that he’s married to a goddess like J.Lo. “Ain’t No Mountain High Enough” was, you know, a group number. It’s funny to see people like Casey, Paul and Scotty try and fit in when they do these performances. 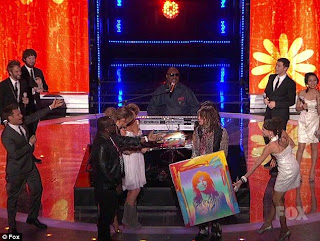 The Stevie Wonder performance was a delightful surprise, and the Idol kids looked like they were having a total blast. The birthday celebration for Steven Tyler was all kinds of adorable, too. I loved the cake they brought out for him. The Ford music video was cute, too. I enjoyed the Sugarland performance, though Jennifer Nettles’ outfit was…not great. I was surprised that I didn’t really like Jennifer Hudson’s performance, though. I love her voice, but the song was just not her best. More lost on me, though, was all the wrestling stuff. Gross. I loved Jacob Lusk saying “I am not going to talk about wrestling.” Don’t the other people in the Idol house get annoyed that James is dominating the TV with that crap 24/7? I’d lose my mind! The look on James’s face was pretty priceless, though, when Ryan said he wasn’t safe. I guess he’d been pretty confident. Then, of course, he looked elated.

Overall, I thought it was one of the better elimination episodes I’ve ever seen. The filler material was fun, and the results themselves were surprising. What’d you think?