In honor of 4/20 Comic Nexus’ venerated editor, Grey, asked me to put together a list of what I consider to be the Top 10 Stoner Comics. I was happy to oblige, since I fan of these products anyways, and you can also find these products online using a cbdistillery coupon to get more affordable prices.

10. Superman/Batman #46 Written By: Michael Green & Mike Johnson. Penciled By: Shane Davis
The now infamous issue of Superman/Batman where during Supe’s and Bat’s quest to rid the Earth of Kryptonite Superman comes in contact with magically infused Silver Kryptonite and, well, gets stoned off his ass. This leads to such priceless panels such as: 9. SuperFuckers By James Kochalka
Who’d have thought a guy that writes children’s books could put together a comic so vulgar I’m kind of wondering how they’re going to pull off the proposed Adult Swim show (here’s hoping they can tone it down enough for TV and still keep it funny.) Imagine if Drawn Together and the Teen Titans cartoon had a baby – it’d be this comic

8. Fables By Bill Willingham
When some friends of mine had an apartment we’d all hang out to *ahem* partake, one of them would always leave a copy of the first Fables trade out on the coffee table. Pretty everyone who came through at some point or another, after the smoke sessions, would pick it up…and none of them would put it down. Fables is a great series, don’t get me wrong, but I don’t think Willingham has any idea how appealing it is to those who are ripped out of their skulls.

7. Batman #702 Written By: Grant Morrison. Penciled By: Tony Daniel
The final half of “Batman: RIP – The Missing Chapter” which Morrison to wrote explain what Batman went through between his harrowing escape from the grip of the Black Glove and his “death” in Final Crisis, for those in the know, there’s something a lot deeper going on in this issue. For those of you who haven’t had the pleasure turn on, tune in and drop out, the experience Batman describes is pretty god damn similar to the psychedelic experience (and considering who wrote this comic, that shouldn’t be so surprising)

6. New X-Men #121 Written By: Grant Morrison. Penciled By: Frank Quietly.
Another Morrison joint, this time from his stellar New X-Men run. In this silent issue, Emma & Jean take a trip into Xavier’s subconscious and discover the origins of Cassandra Nova. It’s a pretty weird ride with even kookier art It ends with the best single piece of dialog Morrison has ever written. You should go buy the Omnibus right now to check it out.

5. FreakAngels Written By: Warren Ellis. Penciled By: Paul Duffield
I had a pretty hard time deciding what Warren Ellis to put on this list. Planetary almost won out but then I remembered that there are a couple of things FreakAngels does better – it’s much funnier and it does a very good job of making you want more. And you can read it for free at your computer or phone, perfect for stoners who are too broke to buy the trades or too paranoid to sit in Barnes & Nobles and read it.

And I’ll never forget a particular questioned it inspired from a friend of mine when we were…err…less than sober: “If it’s the end of the world why the fuck is everyone dressed so nice?” 4. Alias Written By: Brian Bendis. Penciled By: David Mack.
I think I’ve done a pretty good job of keeping my Bendis hate underwraps during my time with Nexus so I’m pretty glad that the first time I’m really writing about it’s in regards to Alias. It’s easily the best thing he’s ever produced and is a decent look at the absurdities of the Marvel Universe through the eyes of it’s most jaded occupant, Jessica Drew. It’s got great dialog and unintentionally hilarious situations.

3. Black Hole By: Charles Burns
I had the pleasure of being introduced to this comic in an English class I took my freshman year. Sometimes when I re-read it, I wonder how it didn’t Burns more than the ten years it did to work all the detail in each and every panel and spread. The art alone is mind-blowing. Go read it right now.

2. SHIELD Written By: Johnathan Hickman. Penciled By: Dustin Weaver.
I’m pretty sure it’s impossible to get as stoned as Hickman had to be to write this comic. Seriously. If someone can tell me what the fuck it’s about I’d really appreciate it. 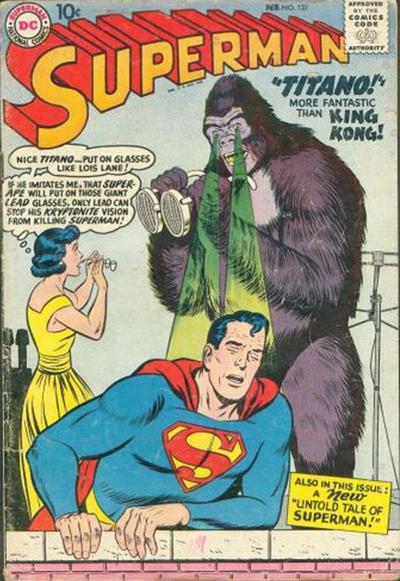 My single favorite comic of all time, and the absolute reason I do not regret picking up “Showcase Presents: Superman.” As you can tell from the cover, Superman has to deal with the menace of Titano, a gigantic gorilla with Kryptonite eyebeams. Naturally Superman defeats him, but as Lois rightly brings up – what the hell do you do with a giant gorilla?

Superman’s solution? He throws that son of a bitch back in time. Seriously. Barring “Superman & The Legion of Superheroes” this single, ridiculous issue is better than any Superman story published in the last decade, especially the current walking across America bullshit.

So, there you have it folks. Go out there, have a safe and happy 4/20, and most importantly: Don’t forget to read some comics!