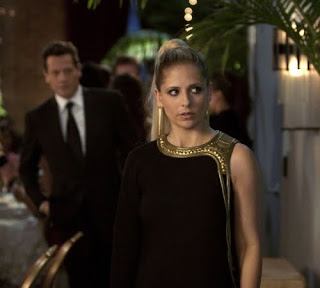 After watching a second episode of Ringer, there’s no doubt in my mind that this is a nighttime soap opera. It’s not great, but it’s deliciously juicy and campy, and I kind of love that. My TV schedule could use that. I gave up on Desperate Houswives after two seasons, Grey’s Anatomy just isn’t that good anymore, and I don’t watch any of those teen shows like Gossip Girl or Vampire Diaries. I think Ringer could definitely fill the void of that cheesy, soapy show that I DVR and watch when I have a chance. (Like today, as I sit at home nursing my sad, swollen post-surgery wrist and eating pumpkin pie.)

In this second episode, Bridget dealt with the aftermath of shooting her attacker, which was complicated when her husband announced they’d be hosting a party in the very loft where she’d done the deed. There was a lot of drama surrounding the hiding of the body and whether she’d be exposed. She wasn’t, but the body has mysteriously disappeared.

Bridget was planning on skipping town with her hot sponsor, but she bailed on that plan when she realized that her disastrous party girl stepdaughter could use her help. We did learn more about Siobhan this week. She’s definitely a bitch, except maybe to her crazy friend Gemma. Or maybe Gemma is just too self-involved to realize that her BFF is suddenly nice and kind of witty. Siobhan’s husband Andrew has nicknamed her Shiv (like, really?) and works with an even bitchier woman who totally wants him at a company that seems to specialize in being rich and British. And Siobhan used to take care of Bridget when she was drunk and sloppy.

Since she was planning to skip town, Bridget emptied out Shiv’s “emergency” bank account, which threw a total wrench into Siobhan’s plan. We know this because Siobhan tried to empty the account in Paris, found out it has been closed, and called someone to say “She’s ruining everything.” (The episode’s title.) So what’s Siobhan’s plan? What do these cell phones have to do with everything? Why didn’t the hit man have a smartphone? I thought assassins would need email access. When will Bridget fake a miscarriage? And most important of all, who told Siobhan she should wear a Jessica Simpson brand ponytail to a Titanic themed party?