As you know, this leg of The Amazing Race sent teams to Phuket, Thailand to perform such strenuous tasks as rock climbing and setting up beach chairs. NO seriously – scaling the side of an island was easy as pie compared to getting a beach umbrella to stay in the ground. The leg wasn’t the most exciting one I’d ever seen, and it was made even duller by the end result. But let’s start at the beginning.

First to Worst to First

The leg started out rough for Andy and Tommy and Laurence as Zac, as both teams made a major mistake in booking their flights to Phuket. Are these dudes just too chill for their own good? Realizing they couldn’t grab a flight to Phuket from Yogyakarta, they hopped a flight to Jakarta. But they didn’t book a connecting flight – they just assumed they’d get one when they landed in Jakarta. Well, while they were on a plane all the other teams showed up at the Yogyakarta airport, and they booked flights to Jakarta and then from Jakarta to Phuket. So when Andy, Tommy, Laurence and Zac landed in Jakarta the best flight to Phuket was full – they had to take a different flight that connected through Bangkok and would arrive almost an hour later than all the other teams.

It would have been interesting to watch two of the strongest teams in the race battle it out for last place, but the boys got lucky. Everyone arrived at the Detour to discover that the dock where their next clue was located didn’t open until morning. The playing field was leveled, and from there on out Andy and Tommy cakewalked through the leg.

Hearing the descriptions of each task, I thought Beach Preparation sounded like the laughably easier task. Sure, it might be a pain to dig all your items out from that supply hut, but once you’ve done that you’re golden. Right? Wrong. Very wrong. 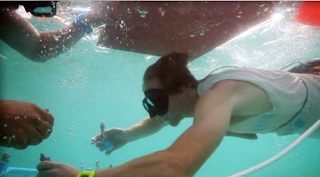 Originally, most of the teams went for Coral Reconstruction. And at first I thought it seemed much easier than I’d imagined – Andy and Tommy seemed to finish in about five minutes flat, and bickering siblings Justin and Jennifer weren’t too far behind. But after that, it all went to hell for people. The current was strong (Andy and Tommy’s surfing experience helped them, Justin’s success is a mystery) and everyone’s coral nurseries kept falling apart in the water. One by one Jeremy and Sandy, Amani and Marcus and Bill and Cathi gave up and switched to the other challenge.

But the teams who’d selected Beach Preparation weren’t having much luck either – wind was a problem, whether you were in the water or on the beach. As teams tried to line their chairs up just so to match the display, their comically large beach umbrellas would fly away. 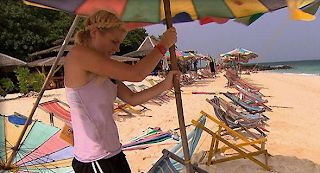 Despite arriving at the challenge first, the twins really struggled with this challenge. Ernie and Cindy finished first, followed quickly by Laurence and Zac. But then the teams who’d switched over from the coral challenge started finishing before them, until poor Liz and Marie were the only ones left on the beach.

For a while, it looked like Liz and Marie might be able to catch up. For the rest of the leg, teams had to direct their speedboats from place to place. First to grab their next clue at a landmark of two large islands, then to the Roadblock at another large island, and finally to the floating village pit stop. Cindy and Ernie were the first to screw up, sending their boat South instead of North and completely missing the landmark. With no gas stations to stop at for directions, they just stared out into open water looking for their next clue.

The Roadblock required one team member to scale the rocky side of an island – it sounded hard, but it actually looked rather easy and incredibly fun once the teams started doing it. You had to love Cathi shouting about loving her view as her husband scaled the rock. No one seemed to struggle, which meant that Liz and Marie didn’t have a lot of opportunity to catch up.

Ernie and Cindy finally got on the right course and made quick work of the rock climbing thanks to their intense pre-race training, but Laurence and Zac managed to get off theirs and lost a little time. Who would’ve thought the golden boy of sailing would screw up on this task?

Andy and Tommy had long ago checked into the pit stop, a wharf-like “soccer field” located at an incredibly awesome floating village. Phil commented on how quickly they’d made it through the leg and awarded them $5000 each. Justin and Jennifer saw their strongest finish yet, coming in second place. Phil got Jennifer to do her “bitch, please” face, and he displayed his classic Phil Keoghan Eyebrow.

Despite their bickering, Jeremy and Sandy finished third, followed by Laurence and Zac in fourth, Ernie and Cindy in fifth, Amani and Marcus in sixth and good ol’ Bill and Cathi in sixth. Cathi and Bill have done a good job of staying in the race so far, but their strategy to let Bill complete the Roadblocks to avoid ending up in last place could eventually be their demise. If Cathi doesn’t catch up, she could be stuck doing something really difficult. 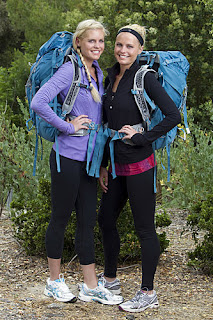 Liz and Marie got the classic “I’m so glad we did this, what a great experience, yadda yadda yadda” edit as they finished the leg, and I wondered if they’d actually be eliminated. Even though I thought it was too soon for another non-elimination episode (two within only four episodes!) it did have that kind of vibe. Frankly, I really wish The Amazing Race would do less of these. They’re so anti-climactic, and have we really benefited from keeping the twins in the race? They’ve pretty consistently been at the bottom of the pack, so I wouldn’t have been sorry to see them go.

What did you guys think of the episode? Personally, I’m ready for the teams to move on from Asia, and I’d like to see some more teams actually get eliminated. There are enough teams I do like to keep this season interesting so far, though – do you think Andy and Tommy can keep this streak up? According to the Amazing Race Wiki the record for most legs won is seven, held by both Nick and Starr and Meghan and Cheyne. Both those teams won their seasons and had streaks of winning four legs in a row – could the snowboarding Olympians break that record and win the race? It certainly looks like they could!