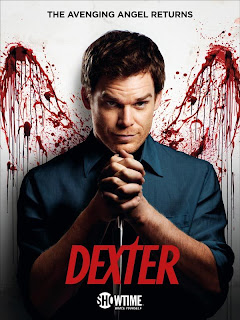 This season of Dexter has focused quite a bit so far on what kind of legacy Dexter wants to leave behind for his son, and the “kill of the week” on Sunday really highlighted that.

When a local prostitute was found dead with a suspicious chipped tooth, Dexter recalled a scrapbook he used to keep of all his favorite serial killers. Baseball cards for monsters, I guess. There had been a serial killer in Oregon nicknamed “The Tooth Fairy” because he removed a particular tooth from each victim as a memento. Sure, it was a stretch (and Harry vocalized that) but Dexter had a hunch that the tooth fairy had retired in Florida.

It wasn’t hard for Dexter to track down and befriend the tooth fairy, Walter Kenney, now a sour old man living in a retirement residence. It all seemed too easy, but then Walter turned the tables on Dexter – he might be old, he might be an asshole, but he wasn’t stupid. He knew Dexter worked for Miami Metro and he knew Dexter was onto him. He just didn’t know why. Obviously, Dexter was able to overpower an elderly man and still got Walter Kenney on his kill table. It was the conversation they had that was the interesting part.

Kenney had alienated everyone in his life, including his son. He had no one, nothing, and wasn’t quite capable of killing anymore – hence the botched extraction of the prostitute’s tooth. He told Dexter that Dexter was looking at his own future, and he could be right. Sure, Dexter’s got it all held together now. He has a son, a sister, “friends”. But what if he was no longer physically capable of doing what he does? Who would he turn into? How much would that eat away at him, day after day?

But Walter Kenney was a much crueler, more disturbed person than Dexter Morgan. At least right now. He wanted to hurt his own son by dying as a known serial killer. Dexter deprived him of that fantasy by smothering him with a pillow and forcing him to die a sad, lonely old man. Kenney’s son would never know the truth, just like Dexter never wants Harrison to know the truth.

Dexter really seems to be struggling with what kind of example he’ll set for Harrison and who his son will become. With the introduction of Brother Sam as a character, who invited Dexter to come to some sort of barbecue-baptism-church hybrid thing on a Sunday morning, is the show laying the groundwork for Dexter to actually consider religion? Or will it just surround him, with Brother Sam and with this season’s creepy religious duo of a “Big Bad”?

Speaking of Brother Sam, I’m still intrigued by his character. Whether Dexter explores “finding God” or not, Brother Sam still represents someone who managed to overcome his darkness. There wasn’t a lot of Brother Sam in this episode and we’ve yet to see if Dexter attended the barbecue-baptism-church hybrid thing, but they fed us just enough to keep my interest piqued.

This Church doesn’t have a BBQ 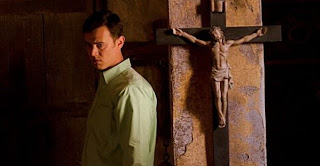 A big part of why Brother Sam’s character is interesting is because of how thoroughly religion is a theme this season. We have Brother Sam, the reformed benevolent monster. We have Dexter, the skeptic who is considering sending his son to a religious school. And we have Travis Marshall and Professor Gellar, who continue to creep me out.

I feel like we don’t often get to see this much of the season’s “Big Bad” before Dexter or the rest of Miami Metro does. Sure, they’re aware of that creepy snake killing but they’ve only recently ruled out drugs in that case. Until a few more creepy killings appear, they won’t be on the hunt of a serial killer. However, we still don’t know a lot about Travis and Gellar. It’s some kind of f—ed up student/teacher relationship, and Travis does not seem entirely comfortable with it. He felt bad about making the runner he’d attacked suffer. Of course, that didn’t stop him from killing the poor dude.

So, let’s talk about that final scene. It took me a minute to even realize what was going on. It was disgusting. There were horses and puppets made of what looked like pieced together body parts from their victims, particularly that jogger. Ew. 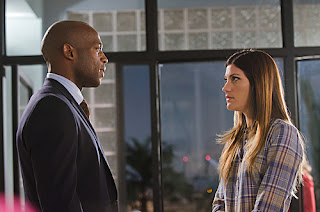 Meanwhile, Deb’s promotion has created some interesting new drama in the Miami Metro office. She’s still very unsure of herself (what to wear? go to the crime scene?) and that makes her easy prey for LaGuerta, a professional bully. The first item on their agenda? Who to hire as Deb’s replacement. Deb was pouring over resumes and wanted to bring in a guy from Chicago, but LaGuerta already had someone lined up. Someone who’d be in her pocket.

I like watching how Batista has handled all of this. He isn’t bitter at all towards Deb, because he knows she’s a good person and a good cop. He’s bitter towards LaGuerta. And so he’s looking out for Deb, and gave her the confidence boost she needed to take a stand and not just follow everything LaGuerta said. She brought in the guy from Chicago for an interview and even though he gave the worst first impression ever (what a pompous ass), it’ll be interesting to see fresh blood in the department. Especially if that shakes things up for Dexter a little.

Also in the department, we’ve got a bitter Quinn who thinks Deb dumped him because of her flashy new job and not a fear of commitment, and Masuka’s creepy intern who’s pretending to be interested in Masuka but is actually interested in ice truck killer memorabilia. So I’m pretty interested to see where THAT goes. (I knew she couldn’t actually be into Masuka. Even in the right light.) 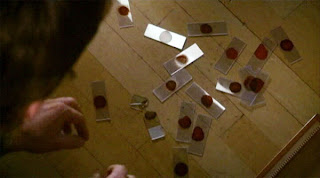 Dexter was pretty confident this week – cocky, even, since his targeted kill was an elderly man with a bad back. And yeah, he successfully offed the guy and was home to tuck Harrison into bed. But then he dropped his box of slides – some shattered, they were all out of order, and he doesn’t know who’s who – and he was reduced to a panicked ball of anxiety.

What does this mean for Dexter? I know a lot of the serial killers we’ve seen have kept mementos, and that it’s an important part of the process for them. But I’ve always hated that Dexter does, since he’s the one serial killer I don’t want to get caught. It ties him to his kills, but he obviously needs them. He’s tied to those slides in the same way Kenney was tied to his box of teeth.