Sweet Home Alabama followed Southern belle Devin as she went through a low-key, Southern-ized version of The Bachelorette, choosing among groups of country guys and city guys. Devin was sweet, intelligent and drop dead gorgeous, and I liked the casually realistic tone the show had – especially compared to the ridiculous display  we see a few times a year on The Bachelor and The Bachelorette. Devin eventually narrowed the field down to two country boys – rural horse whisperer Adam, and city-country former football star Tribble. Tribble seemed to have it all – the charm, the looks, the past glory days. But Devin went with the quieter guy, Adam.

Well now Tribble is back, as the Southern gentleman who gets to choose from eleven country girls and eleven city girls. This couldn’t have worked out better, since Tribble is much better suited to carrying the show than Adam would have been. Tribble was a star quarterback in college and was working as a bartender when he first appeared on Sweet Home Alabama, but he says he’s focusing more on his career now and wants to settle down. 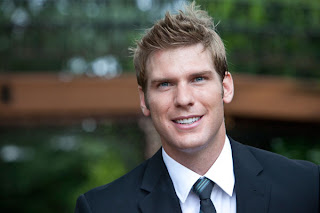 The first episode of Sweet Home Alabama has aired on CMT and is available on their website. (If you’re in Canada like me, that’s where you have to watch it.) There are too many girls right now to be able to notice them all, but let’s talk about the ones who stuck out. Based on the first episode, I have high hopes for this season. Hopefully Tribble has a good enough head on his shoulders to choose one of the nice, grounded girls.

OK, let’s start with some of the country girls.

I think Cassie could go far this season. She’s gorgeous and reminds me of Nikki Taylor, but she grew up on a farm. There’s also a certain similarity to Devin that makes me think Tribble will like her. She’s stunning, but grew up on a farm so she knows how to ride horses and probably won’t mind getting a little dirty.

Mandy, on the other hand, might be a little too country for Tribble. I can see this girl easily being handed the friend card. She’s probably fun to hang out with because she likes to hunt and drink beer, but can a girl in a backwards baseball cap win a former star quarterback? Also, she has a four year-old kid and I doubt a guy like Tribble is ready for that.

Paige will at least stick around for a while because she and Tribble know each other from attending Clemson. Girlfriend needs a little help with her hair, though, it did not look great during that first episode.

We didn’t see a lot of Torie in the first episode, but I’m going out on a limb based on her looks and guessing that Tribble will like her. Tribble says he wants to settle down, and if that’s true then I think he’s going with a Southern belle like Torie.

Now, as I said I think Tribble will likely end up with a country girl – if he’s telling the truth about wanting to settle down. I don’t think a Southern raised mama’s boy like Tribble is going to go raise a family in L.A. or New York. I think a guy who wants to pursue a career in sports broadcasting will date a girl in the city for a while. So that could happen. Now, let’s talk about the city gals who stood out.

I don’t necessarily think Alexandra is right for Tribble, but she’s gorgeous and I think she’ll be around for a while. She’s a model from Miami and studies political science with hopes of going into law. So basically she’s Elle Woods?

Cassidie is a fashion blogger from San Diego, and I think she’s kind of adorable. She seems more down to earth than a lot of the other city girls, and I think that could get her far.

What’s with all the girls named Cassie/Cassidy? Is that Tribble’s mom’s name or something? Anyway, I do not think this is the girl for Tribble. She’s an aspiring pop singer living in L.A. and she arrived in Alabama wearing hot pink metallic leggings. Yeah.

Of Jon and Kate Plus Eight infamy. She thought she’d be safe from the shame of being involved in that scandal because she didn’t think the South had tabloids. Or internet or channels that carry TMZ, apparently. I’m not sure what to cruelly judge her for first. Being a homewrecker? Likely appearing on this show in a feeble attempt to extend her fifteen minutes of small fry fame? Stooping to the low of dating Jon Gosselin? Barf. Yeah, that’s the part I’ll judge her for.

Jacqueline “works for the Yankees”. In “guest relations”. So, like as a waitress serving beer and hotdogs to people in VIP booths? Oh no, not even! She works in customer service, calming down drunk, angry, belligerent fans. How glamorous!

Ooh, this one’s my favorite. Click on the photo so you can get a better look – there’s so much to take in. The glittery hair! The heavy makeup and fake eyelashes! The FINGERNAILS! The massive chest! Kristina is from “The OC” but looks like she’s from Jersey Shore, showed up in an outrageous dress and spike heels, and introduced herself to everyone as “Kristina with a K.” No, like, each person individually. I can only hope that the reason Tribble didn’t immediately send her packing is either because producers asked him not to, or he wants to figure out if she’s actually a drag queen. This should be fun.

If Tribble ends up with a city girl, my snap judgment (and obviously I’m all about those) is that it should be Michelle. She seems very sweet and adorable – she’s studying to become an elementary school teacher, for goodness sakes! – is from Fort Lauderdale which is basically Southern to me, and seems open to the idea of moving to the country. Plus she looks like Rachel Bilson, who currently stars in Hart of Dixie, a show about a city gal moving to a small Southern town. So it’s meant to be, y’all.

Since Tribble didn’t even have a chance to spend alone time with each of the girls this week, he only had to eliminate two of the twenty-two women. He cut one country girl and one city girl, Nicole and Stefanie. 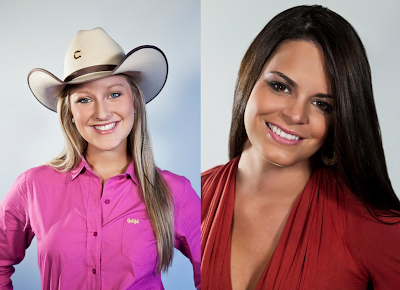 I’m sure you can tell who is who. Tribble sent Nicole home because she told him she’s really serious about competitive barrel racing (I Googled it, she rides ponies) and he didn’t think that jived with his goal of settling down. An honorable choice. He sent Stefanie packing because she’s a sports writer who made a big deal about only dating athletes, and he sees that stage of his life as being over. Again, decent decision.

Next week the real fun will begin, as the inevitable city vs. country rivalry will heat up with the women, Tribble goes on a few dates and has to send four more women home. Trust me, you guys will want to be watching.