Last month, DC Comics let rip that a new character, Bunker, would be joining up with the widely known Teen Titans superhero team as its only gay member. Bunker’s secret identity, we were told, is Miguel Barran, a joyful Mexican immigrant whose hometown accepted his sexuality from the get-go. In light of DC’s horrendous first month failing to live up to its self-proclaimed standards of diversity for its fall relaunch, Bunker was potentially great news–but controversy ensued when Teen Titans artist Brett Booth described Bunker as effeminate and released photos of him dressed in pink and posh civvies; and adding salt to the wound for fans fearing blatant stereotyping was Bunker’s purple superhero costume. Responding to criticism, Booth wrote the following statement on his blog: 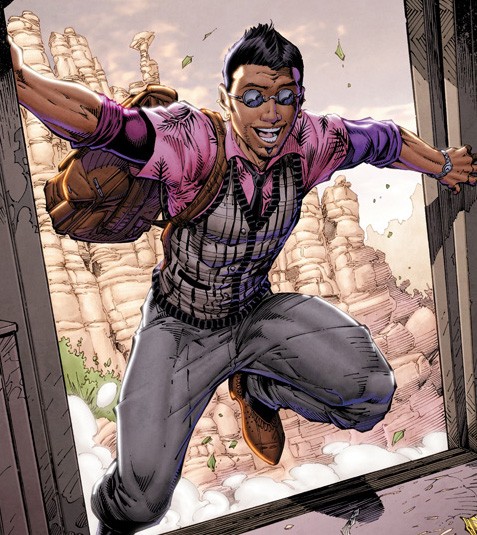 “We wanted to show an interesting character who’s homosexuality is part of him, not something that’s hidden. Sure they are gay people who you wouldn’t know are gay right off the bat, but there are others who are a more flamboyant, and we thought it would be nice to actually see them portrayed in comics. Did we go over the top, I don’t think so. I wanted you to know he might be gay as soon as you see him. Our TT is partly about diversity of ANY kind, its about all kinds of teens getting together to help each other. It is a very difficult line to walk, will he be as I’ve read in some of the comments ‘fruity’? Not that I’m aware of. Will he be more effeminate than what we’ve seen before, the ‘typical’ gay male comic character, yes.”

Booth raises an interesting point, given that while flamboyant behavior among gays may be over-represented in many different forms of media, comics are not currently one of them. In mainstream books, gay heroes are usually portrayed exactly like their heterosexual counterparts in mannerisms and fashion choices, which is a testament to today’s creators avoiding lazy clichés of how gay men carry themselves. However, a character like Bunker could be an excellent opportunity for DC to develop the idea of diversity within the gay community. While writing solely non-femme gay characters in comics may have been sorely needed at one point to correct lopsided portrayals of queer Americans, Bunker could be an exciting new method of reintroducing “camp” to big comics without stigma, and deeming that aspect of gay culture as something to celebrate rather than be embarrassed about. Below are 10 tips DC should follow to get it done right.

1. Refrain from making Bunker’s sexual orientation a punchline. Those crazy gays, always making snarky comments about how horribly that tie goes with those cuff links. During a wake. About the deceased. Interpretations like this constantly reinforce the image of the obnoxious gay man whose sexuality outweighs his propriety, resulting in one-note caricatures that make them incapable of coming off three-dimensional. A Bunker who taps Superboy’s ass with his forcefields or whispers “ooh la la” at a musclebound villain could seriously undermine the importance of his character. Sexuality and comic relief can of course overlap every once in a while, but in this case, they shouldn’t mix in a way that makes us take Bunker less seriously than any of the other Titans.

2. Don’t let Bunker hit on straight guys. The “predatory” homosexual is a stereotype that needs a nice, long rest. Its active use in media gives gay men a bad rap for lacking any sense of self-control or selectivity and, if we’re considering them, exacerbates homophobic men’s worst fears. Gay guys know that straight guys don’t want to sleep with them; “Challenge accepted!” isn’t usually their first reaction. DC should write Bunker as respectful of everyone’s sexuality, even if he’s attracted to straight dudes occasionally.

3. Decide up front whether Bunker is genderqueer. All too often, sexual identity and gender identity can be lumped together when media portrays gay people. But because there’s a huge difference between a gay man being femme and identifying as female, DC will hopefully define which is the case for Bunker, rather than treating the two as interchangeable. If Bunker’s gender happens to be fluid, it would be best for Teen Titans writer Scott Lobdell to establish this early on and clearly define what that means to Miguel and for readers. But if Bunker defines himself as strictly male, then writers handling him should have the sense to keep that aspect of the character consistent, even if many of his personality traits are traditionally feminine.

4. Stay away from AIDS vampires. Seriously. Back in the ’80s, DC created a gay character named Estrano (Spanish for “strange”) who, like Bunker, was flamboyantly gay, wore purple, and stayed happy. He contracted HIV after being attacked by an AIDS vampire (you read right). Clearly, this plot development was borne out of a pop consciousness that branded HIV as “the gay disease.” Although the gay community has experienced considerable improvement regarding HIV since Estrano’s time, it still struggles to move past the reputation the virus brought it. Sure, gay male Americans are still being affected by HIV in real life, but they needn’t be perennially associated with it in media. It’s possible to live a 100% gay and 100% healthy lifestyle, and Bunker’s story should reflect that message.

5. Bunker should express his sexuality as much as his teammates express theirs. Miguel’s sexuality should shape him significantly, but still only to an extent; if he ends up blabbing about boys a ton more often than his superhero colleagues go on about people of the opposite sex, then Bunker’s orientation will become who he is, rather than simply part of his personality. If DC wants to write Bunker as sexually active, then a chaste and straight remaining team would force Miguel to stand out unnecessarily. But if the other members are shown having sexual experiences or talking about sex about as much as Miguel, then Miguel’s own sexuality would have a better shot of being normalized, and he would be more likely to be perceived as an equal among readers.

6. Let Bunker love as much as lust. Stereotypes of gay promiscuity are relentless, and the introduction of Bunker could counteract them. Writing Miguel as a monogamous and faithful boyfriend who genuinely invests himself in strong same-sex relationships is a much-needed antithesis to the typical bar-hopping, endlessly shirtless and orgy-hungry gays seen in entertainment.

7. Remember Bunker’s intersectionality. Miguel isn’t just gay, but Latino. His experience as a gay kid in America might in some ways be radically different from the experience of a gay white youth, and the differences must be fully acknowledged by Scott Lobdell and future writers as they develop the character. Chicano machismo, US stereotypes of Latin Americans, and homophobia in general could and should have a special effect on Bunker when experienced simultaneously.

9. Show the Titans’ varying degrees of acceptance. If DC wants to echo the authentic LGBTQIA experience, then prejudice should have a presence around its queer characters, and it shouldn’t just come from the “bad guys.” Unfortunately, it’s still extremely realistic that the average group of American teenagers wouldn’t uniformly accept homosexuality as normal, and the Teen Titans should be no different. Using Bunker to illustrate the homophobia gay kids deal with, even from straight allies who still harbor tiny biases, would be a respectful and true-to-life approach to homosexual representation. And seeing the Teen Titans grow more accepting and knowledgeable as a result of knowing Bunker would make for great storytelling, anyway.

10. Forget Bunker’s gay. Counterintuitive given the preceding tips, but this one’s just as important. What makes Batman, Spider-Man or Wolverine work isn’t that they’re straight, but that they have highly distinctive personalities. Likewise, Bunker’s staying power will have much more to do with his attitude, emotions, and dialogue than anyone he chooses to take to bed. Bunker’s sexuality should remain a highly important part of him, but he should also remain compelling were his sexual orientation to be stripped away.

Originally published at The Faster Times