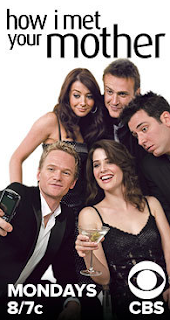 I went back and forth on how I feel about How I Met Your Mother all evening. At its best, “Symphony of Illusion” stayed true to Robin both in what had been set up about her character in the past and what we have slowly learned about her over the course of the series. Robin is a person who has never wanted kids, and that’s OK. We were once told (I’d forgotten, until I read this interview) that Robin would never have kids. So going into the episode, I knew that the show would either have to do go “Psych!” and have Robin not really be pregnant, or that she’d end up either deciding to end the pregnancy or losing the baby. Either way, sad stuff.

Which brings me to the flaws. At its worst, the episode toyed with the expectations and emotions of viewers, in a callous and almost taunting way. I still like the episode and I don’t think what the writers did was that offensive, but I think having Robin address her “future children” for the duration of the episode only to have them turn out to be imaginary was one too many “Psych!”s.

For fans who are dying to see Robin as Barney’s bride at that wedding we all got a glimpse of last season, seeing Robin talk to her future kids was a pretty sure sign that the two would end up together and live happily ever after. But even for the less ‘shipper kind of viewer, it still seemed like an unnecessary fake-out. Let’s start at the beginning. 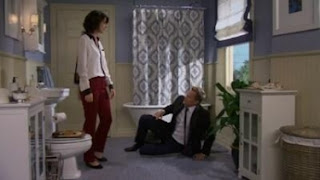 We began with Robin addressing two teenaged kids, just the way Ted has since the story began. But instead of telling them how she met their father – Barney – she cut to when she told them she was pregnant. The scene was funny enough, with Barney making a series of inappropriate comments and Robin clocking him. But then he was excited about it, and kept trying to convince her it was a good thing…until they went baby stuff shopping with Lily and saw how miserable everyone was with their crying, whiny, snotty-nosed kids.

So when Robin and Barney went to the doctor and found out that Robin was officially not pregnant, they were happy. Relieved. It was a twist that you could easily see coming, especially if you knew it had already been established that Robin never had kids. Then, a few days later, the doctor called back. Some test results had come back, and they revealed that Robin would never be able to have children.

But what about the kids she’s talking to right now?! The ones who she keeps apologizing to when she says how strongly she did not want children? As the episode continued, I found myself wondering what the exact wording of Future Ted’s statement had been – did he say Robin would never give birth? Was there some kind of loophole that would allow her to adopt children, or maybe become a stepmother to someone else’s kids? No. As it was revealed at the end of the episode, Robin was simply imagining her children, her future children who were no longer possible. And when they dematerialized, it felt like a cheap gimmick.

The thing is, I didn’t need to see Robin’s imaginary kids to understand the pain of being told you’ll never have any. The episode would have been, I think, more powerful if we watched Robin try and cope with the news without thinking “But she ends up with kids, so it doesn’t really matter.” The pole vaulting analogy Robin used to cover up her pain in front of her friends, that was beautifully handled. The way the Canadian maple leaf onesie made Robin tear up was heartbreaking and realistic. Robin realizing that not wanting kids and being told she can never have them are two different things, it was a valuable and painful realization.

The thing is, Robin never having kids in and of itself was not devastating news. As Future Ted told us, even though she was never a “pole vaulter” Robin led a successful, exciting and fulfilled life. She was never alone. I can appreciate that, and I certainly have never thought that childless people are sad and alone. So it wasn’t like the news that Robin would never have children saddened me – it was just that I thought trying to convince us, for about 21 minutes, that she would was cheap and manipulative.

Overall though, it’s a relatively minor gripe. There was a lot to love about this episode, especially the bittersweet scene where we discover that Ted stayed home in New York so he could cheer Robin up with a Christmas lights show set to AC/DC. Robin had refused to tell him what was wrong, but he said he didn’t need to know – no matter what, he was there to cheer her up. I was really, really happy the show didn’t end with Ted and Robin kissing, and I hope to high heaven that they don’t go down that road. It was nice to see Ted there supporting her as a close friend.

Meanwhile, Marshall’s more lighthearted storyline was a nice foil to the heavy, emotional Robin material. Now that he and Lily own a house in the suburbs, he was excited to oust someone else as the most popular decorated house in the area. A neighborhood kid named Scott offered to help, and Marshall just ate it up – the look on Jason Segel’s face when Scott called him “Mr. E”? Glorious. Just glorious. Of course, the kid was too good to be true and Marshall was a total sucker. Scott stranded Marshall on the roof and threw a party in his house, eating sandwiches, humping the giant red stocking Marshall’s grandmother had knitted for the baby, and using Marshall’s phone to get Lily to text pictures of her boobs. It was hilarious.
What did you guys think of the episode? Did you feel manipulated, or do you think the plot device worked? Are you sad Robin definitely won’t have kids? Do you think she’ll still end up with Barney, or has that ship sailed? Let me know in the comments, and check out these other highlights from the episode: 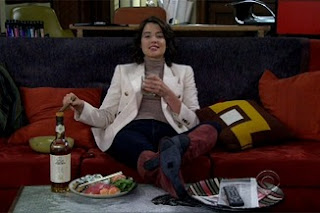