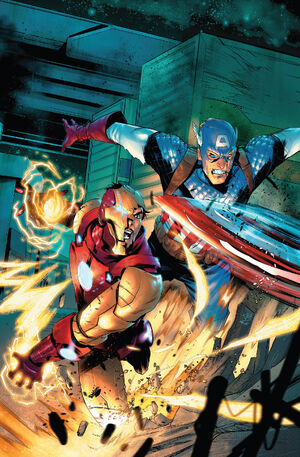 Who wants to read the continuation of a story that came out four months ago? One that takes place, continuity-wise, before Siege?

So, for those of you who may have forgotten, waaaaay back in September Marvel published a New Avengers Annual picking up on the plot thread of Wonder Man’s anti-avengers sentiment. Wonder Man rounds up a veritable who’s-who of some of Marvel’s most forgettable characters – Demolition Man, Ethan Edwards, Devil-Slayer, Century, Captain Ultra – I think the only inspired picks for his “Revengers” were Anti-Venom, Goliath and Atlas, the last two being criminally underused characters.

Somehow these losers manage to take down the New Avengers and destroy the mansion (big shock, as if that hasn’t happened in nearly every story Bendis has ever written.) They then proceed to attack Avengers tower in order to distract The Avengers while they….throw a press conference.

Yeah. That was my reaction too.

Wonder Man, in front of the press, threatens to air out all of the Avengers dirty laundry in front of the world if they don’t disband, namely, all of the nonsense that went down with the Scarlet Witch and something about Ultron (I’m not enough of a stickler to know if the world at large has ever discovered that Hank Pym created it.)

And then Iron Man sucks him into a jar and the Avengers teleport the rest of his team away to beat them into submission, which is exactly what Wonder Man said would happen. The issue ends with a conversation between Beast and Wonder Man, with the latter trying desperately to appeal to his best friend and some shots of various political pundits (I believe I spotted Glenn Beck) wondering whether or not Wonder Man was right and claiming the Avengers, as an organization, have little to no oversight (and isn’t this idea the entire reason we have Henry Peter Gyrich shoved down our throats for so long?)

Wonder Man then teleports away.

Cons:
Everything else in this issue and related to it. The fact that it’s out four months after the first part of the story (which still takes place before Siege so this really should’ve been out sometime last Spring in the first place for anyone to really care.)

Wonder Man’s motivations are questionable. He keeps insisting The Avengers “don’t work” and in regards to incidences like House of M and the Secret Invasion (and, y’know, Ultron) in a lot of ways, he’s somewhat right, The Avengers suck at preventing the worst things from happening in the first place, but they do a damn good job of stopping them once they do.

It would’ve made more sense if Wonder Man simply went to the media with his grievances against The Avengers rather than playing into the old song and dance of getting together a team to fight them – which, technically, was all apart of his master plan in the first place, but it is kind of ridiculous to see a story like this and to read the things that happen afterwards and see that there’s been no follow-up or carry over.

But I guess we’ll just have something to look forward to during the end of Bendis’ tenure on the franchise.