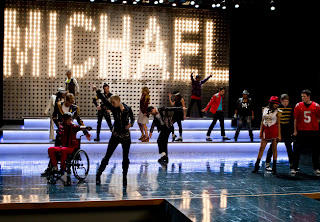 If the highest praise I can give Glee these days is “Well, I didn’t hate that”, then consider last night’s Michael Jackson tribute episode a success. While much of it made me groan or cringe, there were quite a few songs I really enjoyed. That’s probably thanks to the fact that I’m a big Michael Jackson fan, but let’s applaud Glee for not ruining everything, shall we? 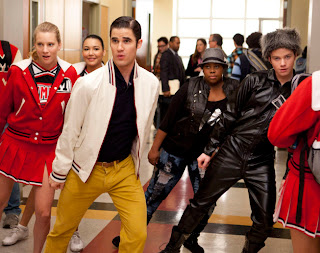 So, did Blaine take that rock salt filled slushie to the eye because he needed to jet off to New York for How to Succeed in Business? If so, I’m OK with that. Darren Criss deserves Broadway. His performance of “Wanna Be Startin’ Something'” was one of the highlights of the episode.

So, Blabbermouth Blaine accidentally told The Warblers (specifically, Sebastian) that New Directions planned on performing Michael Jackson at Regionals. But The Warblers wanted to cover the King of Pop too! Time for a sing-off, or a duel, or whatever. 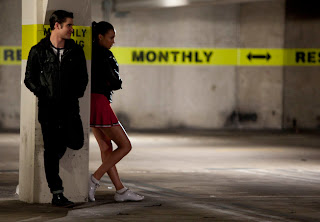 So the singing duel did not take place in a boxing ring, a la The Voice. It took place in an empty parking lot, a la the “Bad” video. Or the “Fat” video, depending on who you ask. I, for one, was really hoping someone would throw out a “Shamu” during the song. The performance of “Bad” was rather weak, I thought, and lip-syncing seemed more obvious than usual. 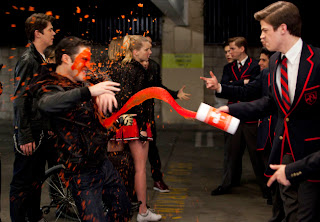 Then Blaine took a bad slushie to the eye (it scratched his cornea and he’d need eye surgery), and the rest of the gleeks were very, very angry. Particularly Artie, so he and Mike sang “Scream”. I don’t know what to tell you about that, y’all, other than I thought it was terrible. Perhaps I’m just not the biggest Kevin McHale fan out there, but I do not understand why Artie is front and center every time this show covers MJ. I found his performances lacking throughout this whole episode.

Not such a Smooth Criminal 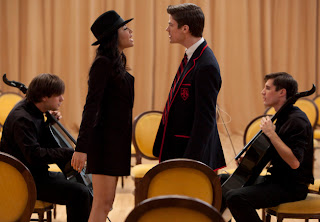 Since Kurt was feel glum rather than vengeful, Santana – oh sorry, just let me go throw up before I type the words “Auntie Snix” – took avenging Blaine’s injury upon herself. But not with violence, because that would be wrong. Instead they had another sing-off! Because it went SO WELL the first time. Who judges these sing-offs, anyway? Don’t they just always end with both sides yelling “We were better!”? Do the musicians decide? Anyway, Santana and Sebastian sang “Smooth Criminal” with a couple of cellists for backup, and I would have loved it had Santana been singing by herself, or with anyone other than Sebastian. I can deal with his presence as a villain, but I don’t care to hear him sing.

Santana’s true motive, though, was to secretly record Sebastian admitting to tampering with the slushie which he told her had been meant for Kurt. But when Santana went back to Kurt with that information, he didn’t want to take it to the police. What? Why??? By Kurt’s logic, the doctor who killed MJ shouldn’t have been convicted, he should have just been taught a lesson through song. It was all kinds of ridiculous.

Meanwhile, Quinn discovered that she’d been accepted to Yale through early admissions. I’ve had millions of problems with Quinn over the last couple seasons, but I think her storyline in this episode went as well as it could have given the character’s inconsistent history. I was glad Quinn admitted with somewhat of a smirk that her sob story essay about maintaining straight A’s while dealing with teen pregnancy was what got her in, and I liked most of the advice she gave Rachel about moving forward into a bright future free of any past anchors. The writers have been all over the place with Quinn, but I’ve always preferred Smart, Wise Quinn and in the spirit of not harping over past mistakes, I liked Quinn this episode. Does that mean Quinn won’t be a part of Glee next season? I certainly hope so. I love Dianna Agron and I think she’s done the best she can with such scattered, bizarre material, but I think she’s better than this show. I’m happy to see her character get a happy ending, and I don’t need to follow up with her next season. Let Dianna Agron go make movies.

Quinn’s performance of “Never Can Say Goodbye” was great. It was sultry and thoughtful and brought out all the best qualities that Dianna Agron has portrayed in Quinn over the years.

Speaking of things I liked, I really enjoyed Mercedes and Sam’s duet on “Human Nature”. It was a little disconnected from the rest of the episode, but I’ve always been in favor of the couple rekindling their romance and I thought their voices sounded great together. Sam and Quinn always seemed perfectly matched when it comes to vocals, but he brought out a softness in Mercedes’ voice that we don’t often hear. I was a fan.

Ben, the two of us need look no more

Speaking of college admissions, Kurt found out that he was a finalist for NYADA. There were some complaints on Twitter, but it’s pretty commonplace for arts schools to have audition rounds, and you had to know that there would be some kind of big moment where Kurt and Rachel travel to New York for their auditions. Kurt was thrilled to get his letter and Rachel was happy for him, but devastated that hers had not arrived yet – and, she still had Finn’s proposal looming over her head.

Oh, the proposal. There was so much wrong. Like Finn telling Rachel they should get married because otherwise they might break up after they move to New York. Or Finn singing to Rachel because it’s the only way she’ll listen to him – that sounds like healthy communication to me! And then there’s the fact that Rachel eventually said yes to Finn, because she can’t follow any of her dreams but AT LEAST she can have ONE thing she wants, her boyfriend. Finn = Chopped Liver. At the end of the episode Rachel got her letter and discovered that she also is a NYADA finalist, so you know that this whole engagement thing won’t last long.

While Blaine awaited his eye surgery, Kurt, Finn and Rachel serenaded him with the song “Ben”. First of all, why didn’t they change the lyrics to “Blaine”? Come on guys, it’s like you’re not even trying. Second of all, did they know it’s a song about a rat? If so, did they select it because Blaine was a rat for spilling the MJ beans to The Warblers? Harsh, guys. Or did they choose it because in the movie “Ben” the rat protected the boy from bullying, and Blaine had been bullied? Whatever. No matter what, it was kind of weird. Also, Finn really dragged down those vocals. And it was too sappy. Speaking of Finn dragging down vocals and songs that are too sappy, that pretty much sums up my thoughts on his and Rachel’s rendition of “I Can’t Stop Loving You”.

So in the end, Kurt decided that the way to get back at The Warblers was to surrender performing MJ at Regionals, but to show them up by performing MJ really well in the privacy of their own auditorium. It was basically exactly what they did in season one’s episode “Funk” to intimidate Vocal Adrenaline. I’d like to take this opportunity to point out that it didn’t stop Vocal Adrenaline from winning Regionals that year.

The song Kurt selected to teach The Warblers a lesson? “Black or White”. So, like, was this about race the whole time? Did I miss something? What the hell. I have three thoughts on this performance:

There weren’t too many quotes from the episode that stood out to me, but I did laugh at the beginning when Santana said “I’d throw this mocha in your face, but it’s not nearly scalding enough,” after Rachel said she didn’t like Michael Jackson, and again when Kurt asked if Sebastian lives at the coffee shop since he’s always there.

OK, that’s all I’ve got folks. What did you guys think of the episode?