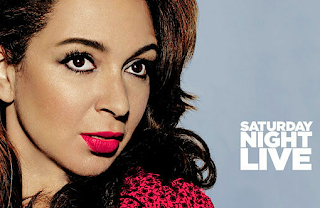 Another
week, another SNL! This week’s host is past cast member Miss Maya Rudolph. I
really like Maya, I love when she sings and when she does an impression of
Donatella Versace. Her career post SNL has been going fairly well. She starred
in Bridesmaids (wasn’t the most
memorable character but she made the friendship look real) and stars on NBC’s
comedy Up All Night. I have watched a
few episodes of the show and it’s cute but Maya’s character is a little
unbalanced. Hopefully they show fixes that problem.

The
big question before Maya hosts is: Will she address Whitney’s death? You may
recall Maya did a hilarious impression of the late singer. I recall she did a
Weekend Update segment just last fall. Will she do an impression? Will she even
address the issue? Here we will find out.
Opening Sketch – Lin-sanity
Again,
here comes my Achilles heel of reviewing comedy sketches based around sports. I’m
never sure how much of the humour I am missing. Apparently the media is having
a little too much fun with puns related to Lin’s name and the fact he is Asian.
Anyway, this was a very funny sketch but it was cringe worthy. Let’s say if I
was watching this with someone of Asian descent I would awkwardly ask, “What
else is on TV?”
Monologue
Nope
she didn’t address Whitney at all. Instead Maya tells the audience how being
back at SNL reminds her of all the people she used to ‘funk’ with. And thus
sings a ‘funky’ song. God this lady is talented just like her mother. (Look up
her mom Minnie Riperton, you will be pleasantly surprised by what you find.)
Anyway my favourite part was when all the male cast members showed up as her
past partners, even Seth. And also apparently her and Stefan had a fling? You
go girl.
Bronx
Beat
It’s
tradition when a former cast member hosts, other SNL alum show up. This time
it’s Amy Poehler who helps out Maya by reprising their Bronx Beat sketch. These
sketches are formulaic but funny. My favourite part is when Maya’s character
describes how awful her husband is then finishes her rant in tears saying, “But
I love that man!” Their guests were two guys who work on their show played by
Andy Samberg and, Holy Sh*t, JUSTIN TIMBERLAKE! These two crew guys confess
that they love the ladies and if they didn’t have their wives or girlfriends
they would totally do them. And then the ladies make this face. 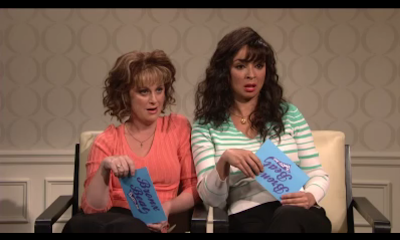 Yup!
I would make the SAME FACE!
I Know why the caged bird laughs
This
was hilarious! Maya Angelou (poet, National treasure, and Oprah spirit guide)
gets her own prank show. I really recommend you watching it. I love how all
those who get pranked just look at her and say, “It’s been an honour.” Even the
descriptions of the pranks are described as poetic:
“Was
this an act of malice?”
“No,
it was an act of whimsy!” 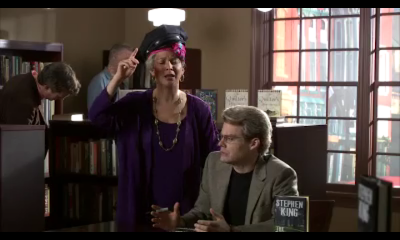 Beyonce and Jay-Z’s Baby
Even
though the prodigal child was born a few weeks ago, it was a great idea to
explore this when Maya was hosting. (Or maybe this is just a comment on how NOT
diverse the cast is.) This skit was a classic array of impressions. Who came to
visit Beyonce and Jay-Z? Prince, LL Cool J, Nicki Minaj, Taylor Swift, Brad and
Angelina, and finally Bon Iver played by, Holy Sh*t, Justin Timberlake!? Here
are my highlights. I loved Maya’s description of giving birth to the baby and
how her screams during pregnancy was her beautiful singing voice. Do you know
who Bon Iver is? (“White butler loves him.”) You have to know his music to
appreciate this hilarious impression that Justin does. Even though Justin is
singing in a silly voice I still wonder, “When you are making another album?” Sadly
for us Canadians, this clip isn’t available. Stupid copyright laws. 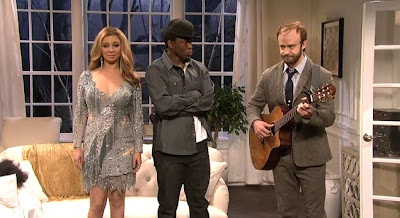 What’s Up with That?
I
was wondering if they would ever bring this back. Something about this one
seemed a little bit off. I usually enjoy seeing what role each cast member
plays but I felt not everyone in the cast was in this sketch. Turns out it was
only Kristen missing from the group. But why did it feel so empty?  Anyway I did like Maya’s Sabrina, the salsa
dancer who loves to “steal the spotlight!”
Weekend Update
Well
if Amy is on the show it only makes sense for her to make an appearance with
her old buddy Seth. They reprise their Really?!
segment related to all this talk about women contraception issues. Now I
don’t want to get into this debate, but seriously? Just a room full of men
discussing the STD check up and women issues? Not a fan. And why are Weekend Updates so short
lately? Don’t have a joke of the night. Sorry guys.
Showcase Girls
I
loved this! It’s like watching two girlfriends having a good time. Kristen and
Maya play two showcase models who have an accent that I can’t put my finger on.
Is it Swedish? German? Not sure. This was the first time I have seen a sketch
fall apart. Kristen was laughing, I mean her whole body would shake and she was
holding back tears. Bill Hader also had a tough time keeping it together. 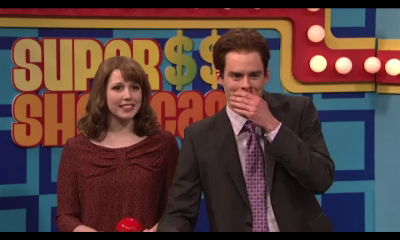 Halfway
through the sketch I couldn’t tell what was written and what was an accent. I
love watching the cast enjoy themselves so I give this sketch a pass.
The Obama Show
What
if the Obamas had a sitcom? It would look a lot like the Cosby show. The good
part of this sketch was all the nostalgia it brought and how spot on the
opening credits were. 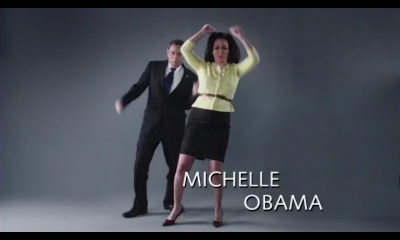 And
Joe “Jamal” Biden with overalls? Priceless! The bad part of this sketch? The
terrible, just terrible Cosby impression by Fred Armisen. Was he in pain or
something? Shouldn’t Jay Pharaoh be doing Obama impressions by now? Also I
enjoyed the re-creation of the Night and
Day song and dance episode. This time Hilary Clinton (Amy Poehler) shows up
to sing along. Sadly, this part of the sketch cannot be found online. Stupid
copyright laws!
How’s He Doing?
This
sketch wasn’t that funny and it was well deserved to be the last sketch of the
night. It went on a little too long and I felt there was more room to play.
Overall
Maya was an excellent host and there were some great sketches with special
guests Amy and Holy Sh*t Justin Timberlake?! I still miss Paul Brittan though. There!
I said it.
Next
time the host will be Lindsay Lohan! Can you believe this? Will this be the
beginning of a come back or the start of another train wreck. I’m leaning
towards train wreck but I believe if she can make fun of herself she may get
the public back on her side.
Thanks!
@AlliTweeds