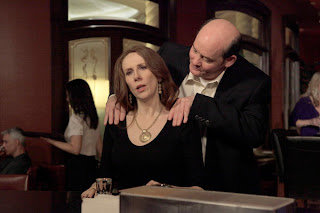 I’m still not sold on this Tallahassee storyline on The Office, but there were moments from last night’s episode that I thought really worked, and others that didn’t.

I don’t like Packer, and I don’t like Nellie. I’m getting kind of annoyed with the idea of Dwight and Packer competing for the VP job by flirting with her. It feels like a recycled, stereotypical storyline and I want it to get more creative.

I did like the Jim/Cathy/Dwight stuff, though. I never thought Jim would cheat on Pam, and watching him deal with what he was pretty sure were signals from Cathy with intense discomfort was hilarious. I loved how he brought Dwight in to get rid of her by pretending he saw a bed bug.

Cathy, of course, I don’t like. The little tramp! She was being so obvious with Jim and when he called her out on it she made him feel like a jerk. And then she kept pushing boundaries! The final shot of Jim and Dwight watching TV in bed together was a clever little resolution.

Then we also had the stuff with Ryan and Erin, which was a fun little addition to what was going on in the hotel that night. Ryan thought he had a shot with Erin, who still plans to move to Tallahassee, and he was pursuing her with all his best moves until he discovered that she’d want to wait six months before sleeping with him. Whoops! And he’s back in love with Kelly.

The problem with The Office right now – or, one of the problems, anyway – is that the focus is now split. We had three storylines going on in Tallahassee, and another one going on in Scranton. That’s a lot for one episode. In Scranton, Val’s boyfriend dropped some food off when the gang had to work late and also dropped a bomb – that he thinks Darryl and Val are sleeping together. They’re not, but he found some scandalous texts like “You’re a good friend…..” – FIVE periods, count ’em!

Andy told Darryl to lay off because Val has a boyfriend, but Pam told him to put himself out there like Jim had back in the day with her. So Darryl did, but we don’t know what will happen. I like Val, so I’m hoping these two hook up. Yet, I didn’t feel that invested in the storyline and I can only think it’s because enough time wasn’t spent on it.

What did you guys think? The Office is definitely having a weak season, but even by those standards I didn’t love this episode.