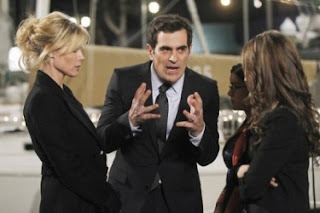 I have mixed feelings about last night’s episode of Modern Family. Judging my my Twitter feed and a few reviews that I’ve read, most people liked it. And there were many parts of it that I found hilarious. But a major storyline reinforced an idea that’s a major pet peeve of mine: That women become overemotional, oversensitive crazy people during their periods.

Yes, yes, some women do find this to be true. And, frankly, some women like to use this idea to their advantage as a reason to act like a bitch with no consequences for a few days. But generally, I hate this notion. Remember the time some Republican jackass suggested that a woman can’t be President of the United States because for five days every month she’d make terrible decisions? I can’t find proof of it online, but I swear to you that this was a thing brought up when she was running for the Democratic nomination. Yes, it’s very likely that three women living in the same house will have their periods at the same time. But the idea that is so often perpetuated in pop culture that all women do during their periods is sit around and cry and moan makes me want to punch someone in the face. The idea that Claire, Haley and Alex would all act completely irrationally and not even acknowledge it felt ridiculous to me, and it prevented me from finding most of that storyline funny.

Yes, I know, part of the storyline was that Claire was trying to force Phil into acknowledging what was going on. But for the most part, the female Dunphys were painted as total lunatics.

Leap Day is for Leaping


OK, let’s start at the beginning. It was Leap Day, a day that serves both as Cam’s birthday and as a day to do something fun and spontaneous in the Dunphy house. I loved this idea – just a few weeks ago I was saying how no one should have to go to work or school on this bonus day, and the Dunphys have adopted this very idea! This year, the plan was to go for trapeze lessons at a nearby amusement park. Fun!

Everything was all set to go until Phil realized his worst nightmare had happened – the three women he shares a home with were all on their periods, sitting on the couch together crying over that sick animal commercial with the Sarah MacLachlan song. They also FREAKED OUT when Phil gently suggested they should leave in about twenty minutes. So he, Luke and Manny concocted a plan to make sure the women wouldn’t come along to trapeze lessons. Of course, it backfired and Luke was stuck at home with the gals.

The one moment I found absolutely hilarious was Luke spilling the artificial blood intended to fake a cut finger and instead made it look like he’d sliced his own throat, scaring the crap out of his sisters. I’m impressed that Haley knew what a tourniquet is.

Meanwhile, Cam was celebrating his 10th birthday! As in, he was turning 40 but since he’d a leap day baby only celebrates a real birthday every four years. For Jerry Gergich, this is a curse. For Cam, it’s an opportunity for dramatic flair. Since Mitch accidentally stayed low-key four years ago and had been paying the price ever since, he was planning a lavish Wizard of Oz themed party for Cam. Except then he remembered that Cam’s hometown had recently been flattened by, yes, a tornado. The family pig, Lily’s namesake, had been killed. The party had to be scrapped.

Poor Mitch. This reminded me of the time he tried to make a big display of all of Cam’s trophies and was instead caught kicking the box they were in when he saw a mouse. This time, he had only two hours to book a whole new party for Cam – a boat party that turned into an epic, smelly disaster.

The third plotline was minimal, but still funny. After Jay chose the high road and avoided a fight when Gloria clashed with a guy in a bar, she found herself wishing he’d punched the guy instead. After all, she’d heard so many stories about Jay from back in the day. But after one conversation with her hotheaded ex-husband, Gloria remembered why she likes being with someone who’s so calm. 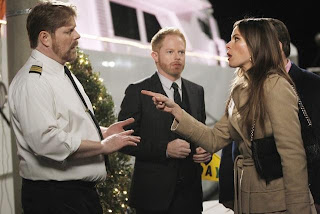 Unfortunately, Jay didn’t know Gloria had come to her senses and basically picked a fight with the boat captain so he could impress Gloria. My favorite was when the boat captain referred to Gloria as “this lady” and Jay assumed he meant Mitch and got all righteous. “First of all, that “lady” is my son!” When the captain went to far and called Jay “Grandpa”, Gloria socked him!

Eventually Mitch realized that Cam’s obsession with his “tenth” birthday was related to his disdain about turning 40, and threw him a perfect tenth birthday party at the nearby amusement park where Phil had wanted to go for trapeze lessons. And “Satan’s Trifecta” worked to Phil’s advantage when his moody family bullied the guy in charge of the trapeze into letting Phil have a turn ten minutes past the closing time. So, everyone wins…?

So, what did you guys think of the episode? A post-show conversation with my boyfriend suggests that I’ll be in the minority on feeling slightly offended by the whole “monstruating” thing. But I have to say, I did find the other storylines really funny. Take to the comments to let me know what you thought!