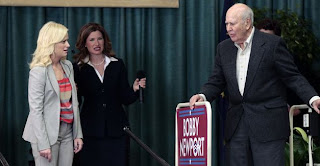 Last night’s Parks and Recreation was a fantastic episode, delivering two really strong, funny storylines in a way only Parks can do. “Campaign Shake-up” saw Leslie and Ben thrown for a loop when Bobby Newport hired a fancy Washington campaign manager, and April moved into a position with more responsibility to fill the Leslie Knope void.

We learned that Bobby Newport was still ahead in the polls, but his numbers were dropping while he was partying it up in Spain and Leslie had secured second place. (Local porn star Brandi Maxxx is in third place.) She and Ben were feeling pretty confident when, lo and behold, his campaign manager quit and was replaced by a savvy Washington DC campaign manager named Jennifer Barkley. Kathryn Hahn had be absolutely cracking up with her guest appearance as Jennifer, who was a sort of anti-Leslie. Smart and savvy, yes, but completely lacking in warmth or genuineness. She even tried to give Leslie legitimate campaign advice because she’s so bored she’d like to “play chess” against herself.

Leslie had a plan to put ramps everywhere in Pawnee, but Jennifer one-upped them with an illogical plan to put elevator lifts everywhere. The problem, of course, is that all Jennifer cares about is winning – that’s what she’s paid to do. She doesn’t care about cost or practicality. When Leslie and Jennifer face off on Perd’s talk show, Jennifer has a response for every argument and attack Leslie makes, because Jennifer doesn’t care if anything she says is true.

This storyline didn’t really wrap up, which is a good thing – I’d like to see Kathryn Hahn on a few more episodes. The woman bought J.J.’s diner a cappuccino machine!

Meanwhile, Chris tasked the Parks department with completing one major project to prove that they can function without a replacement for Leslie – Ron, obviously, was horrified at the thought of having to deal with someone new in the office. So he grabbed Ann and took on her initiative to get all the Pawnee residents to stop putting their mouths over the entire spout on water fountains. This was such a hilarious, gross, weird, totally believable thing for Pawnee residents to do.

Of course, without Leslie around the whole project degenerated into a big water fight, with Tom cowering under a desk whimpering “Everything I’m wearing is suede! Everything I’m wearing is suede!” But when April discovered that their day of fun meant Ron would have to work with a new Deputy Director, she actually came up with a viable idea — just remove the splash guard on the fountain. I was never sure if April was finished with college or not because she seems to always be at the Parks department, but I like the idea of her being pulled into an adult job against her will.

What did you guys think of the episode?

A few quotes and moments I loved: