Cocktail ingredients for a successful episode of The Amazing Race:

Based on that recipe, I’d say last night’s episode of The Amazing Race was a success. We’re getting to know the teams better and I’m starting to choose some favorites and teams to root against. In a surprising turn of events, I’m really being charmed by Mark and Bopper. In a less surprising turn of events, I still don’t like Team Big Brother and the border patrol agents are rubbing me the wrong way as well.

The teams stayed in South America this week as they were instructed to fly to Paraguay – four teams (Rachel and Dave, Art and J.J., Nary and Jamie, Bopper and Mark) ended up on an earlier flight, but their lead ended up not meaning much. The challenges this week were so hilariously difficult that the unlikeliest of teams succeeded.

I wonder if any of the teams who’d seen this:

were a little concerned about the watermelon task? I’d be nervously looking around for a slingshot if I were them. But instead of shooting the watermelons, for this Detour the teams had to stack them.

“Stack Up” required teams to unload a wagon full of watermelons and stack them into a 10×10 pyramid. It didn’t sound that hard, and it was probably the option I would have gone for. “Strung Out” required teams to string a harp, the national instrument of Paraguay. 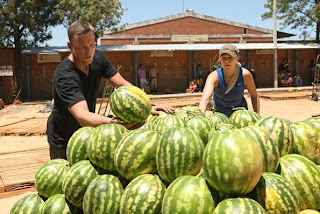 All four teams from the earlier flight went the watermelon route, but only one successfully completed it. Art and J.J. made the smart observation that it was important to stack the watermelons all the same way, on their sides – if you stacked them all willynilly, the pyramid would collapse before it was finished and that was very difficult to repair. While most of the teams began bickering as they watched their watermelons come tumbling down or took one look at everyone else’s disastrous pyramids and headed for the other task, Art and J.J. collected a clue as reward for their perfectly constructed tower.

Only the hot twins, Elliot and Andrew, initially opted for the harp – one of them is a musician and thought his experience stringing guitars would come in handy. Next thing you knew, almost every other team had joined them at the music conservatory. Only Vanessa and Ralph decided to gut it out with the watermelons, a decision that could have been their demise.

While everyone else struggled to string a harp, Art and J.J. were breezing their way through the Roadblock, which required one team member to complete a traditional dance with a bottle balanced on his or her head. If a team smashed all their available bottles before completing the dance, they’d have to leave for the pit stop and take a two hour penalty. Art finished the dance, got his next clue, and he and J.J. were checked in in first place.

Art and J.J.’s first place finish was certainly well deserved, as they blew the other teams out of the water on this leg. But I’m in no way rooting for them – every time one of them opens his mouth, I want to shove a watermelon in it. It was obnoxious enough when they compared their jobs are border patrol agents to Dave’s time overseas with the army, but their Michael Jordan reference really came out of nowhere. And all the bragging about “dopers” and “aliens” and “catching bad guys”? These guys like themselves way too much.

When Rachel and Dave arrived at the conservatory to see all the other teams working on their harps, they decided the time was right to use their Express Pass and skip the Detour. At the time, I thought this was a bad decision. They were in no danger of getting eliminated, at least not yet – I would have at least tried the harp. I’d rather save the Express Pass for when I arrive at a Detour in last place and need to use it to avoid elimination.

Of course, when I thought that, I had no idea that Dave would be the only person to break all his bottles trying to learn the dance. That meant he and Rachel couldn’t complete their Roadblock, and they had to take a two hour penalty when they arrived at the pit stop. Since they were in second place I thought surely someone else would also be slapped with a penalty, but no one ever was.

Eventually, the other teams completed the harp task – in fact, Brendon and Rachel were shockingly swift. Also shocking? The fact that the musician and his brother were SO BAD at the task. I never even really understood what they were doing wrong. Elliot and Andrew had such issues that they considered switching to the watermelon task – I guess they hadn’t heard how difficult it was from other teams – but didn’t because they couldn’t get a taxi.

As everyone else moved on to the dance, Elliot and Andrew were left playing with harp strings and Vanessa and Ralph were left stacking and restacking watermelons. They were the only people who stuck out that task (other than Art and J.J., who finished it quickly). Why? Ralph has a daughter, and Vanessa didn’t want to set an example that quitting is OK.

You know, Vanessa, quitting and switching are two different things. Switching Roadblocks is very often a mistake on The Amazing Race because the other one could be even harder than what you were doing, you waste time changing locations, and you begin that task behind the other teams who’ve been there for a while. But as night fell in Paraguay, you had to think that Vanessa and Ralph should have said parenting be damned and switched to stringing a harp.

Speaking of Vanessa, while her hatred of Big Brother Rachel seemed a tad extreme, I still like her about one billion times more than Rachel. Yes, Vanessa seemed bizarrely preoccupied with Rachel’s too-revealing yoga pants. But so what? I probably would have made a joke too. And once in the cab, Rachel made a few pot/kettle type comments by criticizing Vanessa’s makeup and generally being a bee-yotch. Vanessa’s only crime, if you ask me, was ignoring all of Ralph’s pleas for her to stop mocking the nearby fame whore and focus on the task. Or maybe Vanessa just didn’t know Ralph was talking to her because he keeps calling her “angel”. It’s weird – like that’s her name or something? Doesn’t he know the official Amazing Race term of endearment is “babe”? 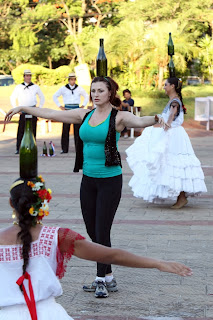 Much to Rachel and Dave’s dismay, the other teams all seemed to be rather good at balancing bottles on their heads. Maybe Dave just has an egghead? As Team Army awaited their two hour penalty, a slew of teams were checking in ahead of them. Brendon and Rachel pulled out a surprising second place finish, followed by meatheads Joey and Danny, then Bopper and Mark in fourth and fake teachers Nary and Jamie in fifth place. Poor Rachel and Dave had to make do with sixth place while cousins Kerri and Stacy took seventh. Rachel, of course, managed to have some kind of emotional breakdown on the mat even though she’s excelled on this leg of the race. It’s like she’s determined to make people hate her, even if she’s doing well.

Now, can we stop for a moment to talk about how insanely gorgeous the woman who stood next to Phil at the mat was? Unbelievably beautiful. I’m pretty sure half of the men in America ran to their computers to price airfare to Paraguay after the episode was over. I tried to figure out if she’s Miss Paraguay but I’m not quite sure. She should be – if she is, Miss Universe should be a lock.

The twins began the Roadblock before Vanessa and Ralph arrived, but Ralph learned the dance quicker than the twin and they left for the pit stop first. It was a footrace, and I thought there was a pretty good chance the twins might just sprint past Vanessa and Ralph. After all, one of them is a professional soccer player and they’re both pretty physically fit, and while the twins had been stringing a harp indoors all day Vanessa and Ralph had been throwing watermelons around in the heat. 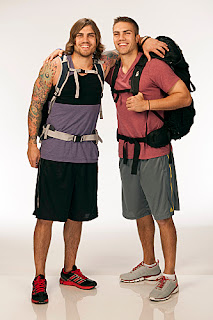 It was a close finish, but Vanessa managed to crawl up the steps to the mat to be checked in with Ralph just minutes before the brothers arrived. I thought the twins might get good news, that this was the first non-elimination leg in the race but, alas, they were out. We never got to see much of their personalities, but they were handsome so I was kind of hoping they’d last longer.

What did you guys think, did you like the episode? Who are you rooting for? Vanessa’s mean girl attitude towards Rachel should have turned me against her, but somehow (maybe because I can’t stand Rachel) I find myself liking her more. I’m also rooting for Bopper and Mark, the Mississippi cousins, and maybe the fake teachers – I need to see more of them.