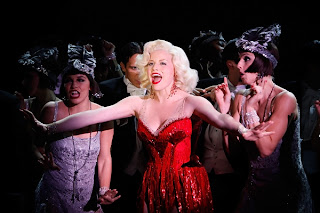 Last night’s episode of Smash was called “Let’s Be Bad” and if that was their aim then congratulations are in order. It was terrible!

This was the fifth episode, and I’d hoped by this point the showrunners would have discovered some of the key flaws in the series. Particularly the most glaring flaw, which is that the kid who plays Julia’s son is a horrendous actor. Seriously, it is painful to watch this kid on screen. So naturally, he was at the center of a main storyline this week! He was caught smoking pot in Central Park, and then later he saw his mother kissing Joe DiMaggio.

Karen’s outside-of-the-musical storyline isn’t much better. Seriously, they resorted to her boyfriend having a hot colleague with a gender-unspecific name? Yawn. You can’t get tropier than that. (Yes, I’ve just made “tropier” a word. Deal.)

There are still glimmers of potential though, which in a way makes Smash all the more infuriating. The fantasy number mid-episode was great. (Though, it borrowed so much from Chicago that I’m not sure you can even call it “borrowing” anymore.) I’m finally starting to buy in to the Ivy/Karen rivalry, since Ivy keeps screwing up at rehearsals and Karen seems to have finally gotten a much needed dose of confidence. But even then, the constant references to “poor Marilyn” had me rolling my eyes. “Poor Marilyn”, it’s so hard for us incredibly sexy women. “Poor Marilyn”, I know what it’s like to be the star and it’s hard. Boo. Freakin’. Hoo.

I’ll give it one more episode. What about you guys – still watching?